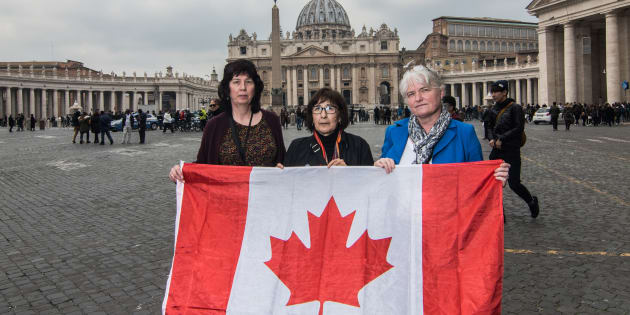 From left to right: Leona Huggins, Evelyn Korkmaz and Bernadette Howell travelled to the Vatican as part of the Ending Clergy Abuse group to advocate for sex abuse victims at a historic summit Feb. 18, 2019.

On her first trip to the Vatican, Leona Huggins was gripped with fear and shame each time she saw a priest.

The then-21-year-old university graduate went there in 1984, spurred by a love of art and the Catholic Church, but also carrying a secret. For the past decade, she had been sexually abused by her Vancouver parish priest.

More than three decades later, she’s back in Rome for a historic summit on clergy abuse. This time she feels herself healing, shedding the shame.

“I leave it all here to the power of this institution. And if they aren’t going to deal with it, the shame is theirs to keep,” Huggins said.

Huggins was first groomed by Rev. John Edward McCann when she was 11 years old, she said. He showered her with the attention that her parents, who were raising 12 children, couldn’t give her. Then the sexual abuse began.

It wasn’t until Huggins was 29 that she reported the abuse to the police. McCann was convicted in 1992 for crimes against her and another woman, but she said she found out in 2011 that he was again serving in the ministry. He died last year.

She is joined in Italy by two other Canadians, Bernadette Howell from Vancouver and Evelyn Korkmaz from Ottawa. Howell said she was abused by a Catholic priest as a young woman in England and Ireland. Like Huggins, she said she kept it a secret for a long time.

“I felt like I had ruined a priest’s life — that I had been responsible for breaking his vows. That’s what perpetrators do, they make you feel like you’re to blame for what actually happened,” Howell said.

Korkmaz attended St. Anne’s, one of Canada’s most horrific residential schools, from 1969 to 1972. An Ontario Provincial Police investigation in the 1990s found that at St. Anne’s, children had been subjected to whipping and torture by priests, nuns and workers, and identified dozens of suspects. Five people were convicted.

Kormaz said when she was 10 years old, she was gang-raped by other students, who were in turn sexually and physically abused by priests and nuns. Nothing was ever done about the crime, she said.

Korkmaz said she had originally requested Prime Minister Justin Trudeau go to Rome to ask the Pope to apologize. “He didn’t and that’s why I’m here,” she said, demanding that anyone who commits the sexual abuse, or tries to cover it up, is removed from the church.

“We need to speak for the future children so they have happy, healthy lives not destroyed like ours were. The Pope is the head of the church. He needs to be the one who comes over and says I’m sorry for the damage done,” Korkmaz said.

In recent years, Trudeau and MPs have asked the Pope to apologize to residential school survivors, but he has declined.

For decades, countries around the world, including Canada and the U.S., have documented cases of Catholic officials sexually abusing children, despite the church’s attempt to cover up the incidents. Pope Francis himself admitted to making mistakes last year when handling a sex abuse crisis in Chile.

Opening the summit earlier this week, the Pope said the Catholic church needs “concreteness” when addressing sexual abuse within its ranks.

“We hear the little ones asking for justice. The weight of the pastoral and the church’s responsibility weighs on our meeting and forces us to discuss in a synodal, sincere and deep way how to face this evil that afflicts the church and humanity,” Pope Francis told his cardinals, archbishops and bishops.

“May the Virgin Mary enlighten us to try to heal grave wounds that the pedophilia scandal has caused to both the young and believers.”

Howell hopes the survivors sharing their stories at the summit will help Catholics become more aware of the problem — that it could be happening in their local church.

“It’s when vulnerability intersects with power, and that’s where abuse can take place,” Howell said. “I don’t think they (Catholics) actually recognize what is happening to survivors who feel isolated, who are no longer able to be at church.

“Church was very important to me, but unfortunately I no longer feel welcome.”

If you need help or support for sexual assault, visit the Canadian Association Of Sexual Assault Centres website to find resources near you.

One by one, a dozen survivors shared their shattering tales of sexual abuse at the hands of Catholic clergy with high-ranking church officials gathered to listen to the stories they’d declined to hear for years.

Leona Huggins, the only Canadian in the gathering that took place ahead of a historic summit at the Vatican this week, said the energy built “like a tsunami” as victims hailing from Spain to Jamaica urged clergy to take concrete action to begin a new chapter for the church.

But she said the tide ebbed quickly as soon as the harrowing accounts were presented.

Huggins said one archbishop reacted by saying “I guess we’ll have to get to work,” prompting her to ask why such work had not already begun. That question was answered with a demand to be respectful, she said, eroding hope that this week’s summit meant to tackle sexual abuse in clerical ranks would result in true change.

“We were truth-tellers in that room,” the Vancouver-based school teacher said in a telephone interview from Rome. “It’s really hard for me to think how anyone could hear those stories and not take courageous action.”

Huggins, 56, had limited hopes for the international meeting, called by Pope Francis in a bid to quell a scandal that has dogged his tenure as head of the Catholic Church.

The pontiff himself was not at the gathering of survivors held a day before the official summit got underway Thursday, a point that did not sit well with those who shared their stories.

Huggins, who has gone public with her story of abuse, said her experience played out like so many others. She said she was groomed and ultimately abused by a Catholic priest who worked in her British Columbia parish in the early 1970s.

He was ultimately convicted in 1991 of sexual offences against two women, including Huggins, but continued working as a priest in communities ranging from Lethbridge, Alta., to Ottawa until his death in 2018.

Huggins, who used some of her time at the closed-door gathering to call for recognition of Canadian Indigenous victims of abuse, said the Pope’s presence would have been an important sign that the church was serious about addressing past wrongs and preventing new ones from unfolding.

Pope Francis expressed many high-minded intentions at the summit’s official opening on Thursday, acknowledging the need for concrete action and significant, internal change.

“Listen to the cry of the young, who want justice,” he told the gathering. “The holy people of God are watching and expect not just simple and obvious condemnations, but efficient and concrete measures to be established.”

People from five continents shared their stories of abuse, including an unnamed woman from Africa who told the gathering of the three abortions her former priest forced her to have during the decades in which he raped her.

The Pope, for his part, handed out a list of 21 proposals for the church to consider, including specific protocols to handle accusations against bishops.

One idea called for raising the minimum age for marriage to 16 while another suggested a basic handbook showing bishops how to investigate cases.

But for Huggins, the specifics of the 21 points did even more than Wednesday’s gathering to chip away at what little optimism remains, lamenting the newly raised minimum age is still wildly out of step with societal norms and criticizing the church for not having a handbook in circulation long ago.

Huggins said she feels she still has to “hold out hope” that leaders will make good on their promises of reform. If they don’t, she said, she fears an entirely new generation would be at risk.

“I don’t see how anyone can continue to bring their child to a church that will not promise their child’s safety,” she said.

— with Files from the Associated Press.