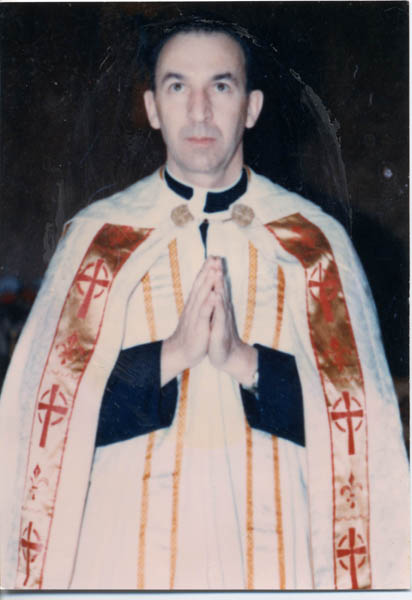 Priest ordained 29 June 1951 for the Diocese of Bathurst, New Brunswick.  By late 60s had relocated to the Archdiocese of Regina, Saskatchewan and eventually changed his incardination to that diocese. Between Bathurst and Regina he spent time in Miami and Oklahoma.  He spent some time in Winnipeg, Manitoba and was then off to Toronto where he was filling in for vacationing priests when he was charged with fraud, first in Manitoba, and then in Toronto.  Twice charged and convicted for fraud – sentenced to time in jail.

At some point spent time in Africa with a leper colony.

2007 – lawsuit by Albert Laval alleging child sex abuse in 1963 at the parish rectory in Cantal, Saskatchewan.  (Lawsuit settled out of court around 2010. )   It is known that in the late 50s Father Finnin abused a boy in Weyburn Sask. – the abuse was reported to authorities, ….and Father Finnin was recycled to Estevan.   He later abused at least one boy.

Bishops of Winnipeg Archdiocese during years Father Funnin may have been there:  George Bernard Flahiff, C.S.B.  (10 March 1961 Appointed – 31 March 1982 Resigned)

The following information is drawn from Canadian Catholic Directories (CCCD) of that date, media (M) and internet (I) and personal (P)

November 1981:  GUILTY plea in Newmarket, Ontario to 34 charges of fraud – three of his victims in this case were priests.  One priest list a $20,000 inheritance – sentenced to four years in prison – sentence to run concurrent to previous sentence from Manitoba (M)

September 1981:  CONVICTED on two charges of defrauding a Manitoba deacon of about $100,000 in 1973.  The monies were presumably a business investment and to aid lepers in Africa (M)

1973:  On leave of absence which extended until he was charged for fraud (M)  Reasons for LOA unknown.

– I have been told that people in the Archdiocese  of Regina were NOT told that he was on a LOA, but that  that he had gone to serve in the Diocese of St. Boniface, Manitoba.  Years later Albert Laval contacted the St. Boniface Diocese and was told there was no record of him ever serving there (P)  However, the Manitoba fraud charges stem from him defrauding a deacon in Winnipeg of $100,000 in 1973 (M)

– drove an Oldsmobile 98.  Used to let the young boys use his car.  He was always surrounded by young boys.  (P)

– He used to ply young boys with alcohol. (P)

– He was forever asking people to invest in some business, and word is that he even asked a penitent for money in the confessional.  He also asked for money for the lepers in Africa (P)

About 1961 or’62:  St. John the Baptist Roman Catholic Church, Estevan

Late 50’s to about 1961:  St. Vincent de Paul Roman Catholic Church, Weyburn, Saskatchewan (P)  I have been told that he was packed off to Estevan after a complaint that he sexually abused a young lad (P)

– according to media reports, spent time in Miami and Oklahoma (M)

– according to media reports at some time spent time a the Holy Angels Leprosarium in Benin, Nigeria (M)

1951: ordained, probably for the Diocese of Bathurst, New Brunswick (CCCD)

In his statement of claim filed in March, Albert Laval claims he was abused in or around November 1963 when he spent two nights at the Cantal, Sask., parish rectory.

Laval alleges the now-deceased Pius Finnin, then the parish priest in Wauchope, Sask., abused him knowing Laval was neither consenting, nor of an age where consent was relevant.

A statement of claim contains allegations that have not been proven in court. Jay Watson, Laval’s Saskatoon lawyer, could not be reached for comment on Monday afternoon.

Laval claims the archdiocese is liable for failing to protect him, in part by permitting “unqualified individuals to hire the Deceased as a priest for the Parish.”

The claim goes on to further allege the archdiocese “lacked policies and/or guidelines respecting the hiring of adequate persons to serve as its servants, agents or employees,” or did not follow policies that were in place.

Laval adds the archdiocese as employer failed to remove Finnin from his duties after learning of allegations against him of sexual misconduct — including allegations that pre-dated his employment with the Regina archdiocese.

But in a statement of defence filed in late May, the lawyer for the archdiocese argues that while Finnin was a priest working in the area governed by the archdiocese, he was not in fact considered an “agent or employee” of the archdiocese.

When contacted on Monday, archdiocese lawyer Paul Harasen said the exact nature of the employment relationship between the priest and the archdiocese will have to be determined.

But in any case, the archdiocese “denies that it had a relationship with Pius Finnin which would make the Archdiocese vicariously liable for any acts or omissions of Pius Finnin,” the statement of defence reads.

It goes on to say the archdiocese did not know or ought to have known about the alleged sexual assaults or any alleged potential for assaults, meaning the archdiocese cannot be held responsible for any negligence, breach of fiduciary duty and/or breach of trust.

Harasen added that any allegations of abuse will have to be proven by the plaintiff in court.

Laval claims the archdiocese also did not offer counselling or any other assistance after learning of the alleged abuse. He claims that as a result of abuse, he suffered physical, emotional and psychological trauma, among other classifications of pain and suffering, loss of enjoyment of life and loss of amenities.

He is asking for an unspecified amount of damages and costs.

The archdiocese is asking the lawsuit be dismissed with costs awarded to the defendant.

Harasen said the lawsuit will have to next go through a mandatory mediation hearing before proceeding any further. While a date for that hearing has not yet been set, it could be held sometime his summer, he said.