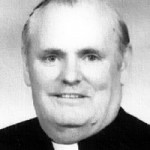 1988:   “A few words from our Principal…” Father Leo Campbell, Principal at St. Mary’s College, Sault Ste Marie, Ontario (Excalibur yearbook) (someone who contacted me believes that the little boy in the 1942 picture is Leo Campbell)

The following dates are drawn from the Canadian Catholic Church directories (CCCD) of that date, the 1980 Ontario Catholic Directory, the Basilian bio published at the time of his death (BIO– scroll down or see Basilian Newsletter above), and personal contacts (P).  I am still working to clarify dates and locations.

14 February 2008:  According to one source died while at Southdown or wherever he was sent for treatment. According to another he died days after being moved to a ‘safe house.’  According to blogs he died at the Basilian residence of St. Michael’s College School.

“Leo had been experiencing laboured breathing for a few days.  After supper he went to work on the computer.  A short time later Fr. John Malo, Rector, went to see if Leo had accessed the Internet and found that he was dead.” (Bio)

Dear Parishioners at Holy Rosary: I wish to bring you the news that I received from Fr. Decker concerning Fr. Leo’s health and to update you with the news of the Pastoral Associate:

Fr. Kenneth Decker, the Superior General of the Basilian Fathers, has asked Fr. Leo Campbell to take a temporary medical leave from Holy Rosary Parish, effective Friday, January 18, 2008. Fr. Campbell’s medical situation is appropriately confidential. No other information is available at this time. Any personal messages for Father Campbell can be addressed here to the parish and will be forwarded to him. Work-related matters should be referred to other staff members. Any questions should be addressed to Father Decker at his Toronto Office.

Clearly Father Campbell’s absence creates challenges for Fr. Chui, Parish Staff, and many parishioners. The Basilian Fathers are working with me to meet these challenges. Please be assured that Fr. Decker and all Basilian Fathers will keep Holy Rosary Parish in its prayer at this time.

– according to one source it was understood that after the Basilian superior heard of the allegations Campbell was sent off  somewhere in the Newmarket area for treatment. That would probably be Aurora

1985-1986: listed in CCCD as 250 St. George’s Avenue East, Sault Ste. Marie.  (Should this read Sudbury, Ontario – the address of St. Charles College, Sudbury, Ontario? or is it the wrong address right city?  According to Basilian bio he was at St. Mary’s in “the Soo” )

-sex abuse allegations related to his time at St. Mary’s – in one instance allegedly took a group of four boys on a camping trip.  One boy taken to the hospital afterwards with rectal bleeding. (P)

1970-1978: Director of Columbus Boy’s Camp. (the camp once operated on Lake Simcoe: it was  funded by the Knights of Columbus and, according to one website “staffed by senior high school students from various schools run by the Basilian Fathers”?)  According to bio   “ministered” at Columbus Boys’ Camp. (Bio)

circa 1976:  allegations related to his time at Columbus Boy’s Camp

said to have brought 5 or 6 young boys  – “streetkids” – from Detroit for his ordination and first Mass in Dominion.  Father Campbell allegedly told the people of Dominon that the boys were his adopted sons. The boys were all said to be in their early teens (P)

– spent time at TB sanatorium, probably at either Port Edward or Kentville, Nova Scotia (Port Edward would have been closer to Dominion.,  If there was room this would probably have been where he spent the bulk of his time) (P and BIO)

1960s –spent two years in Guelph, Ontario after he graduated from high school. (one source tells me that after graduation he spent two years in Guelph – from there was admitted to a san for treatment of TB, and from there attended St. Francis Xavier University, Antigonish.  The Basilian bio indicates that he went to St.FX then to the san.  I am getting this checked (P and BIO)

– after ordination allegedly made sexual advances on young boy in Dominion.  To my knowledge these were not reported. (P)

– Said to be frequently in the company of or surrounded by children, both before and after ordination (P)

From the Basilian Father’s Newsletter

Leo Charles Campbell died suddenly in the early evening of Thursday 14 February 2008 at the residence of the Basilian Fathers of St. Michael’s College School (Oriole Parkway), Toronto.  Leo had been experiencing laboured breathing for a few days.  After supper he went to work on the computer.  A short time later Fr. John Malo, Rector, went to see if Leo had accessed the Internet and found that he was dead.

Confreres are reminded of the usual suffrages for the repose of his soul.

Leo Charles Campbell was born 20 July 1939 in Dominion, Nova Scotia, one of eight children born to Leo and Christina (MacLeod) Campbell.  He attended both elementary and secondary school in Dominion.  After working a year, Leo began university work at St. Francis Xavier University, Antigonish, Nova Scotia.  He completed three years of study but then had to suspend this to deal with tuberculosis which resulted in the removal of part of his left lung.  He was employed by General Motors and worked in Montreal, but a persistent, strong desire to become a priest remained with him and eventually led to his entry into St. Basil’s Novitiate, Erindale, Ontario in September 1965 and the professing of first vows on 12 September 1966.  Others professed that year are Edward Heidt, J.R. Stephen LaCroix, J. Michael Miller, and François Morfin.  He completed his B.A. in 1968 at the University of St. Thomas, Houston, Texas.  Prior to entering St. Basil’s College for Theological studies, Leo taught two years at Michael Power High School, Etobicoke, Ontario.  He was awarded his Master of Divinity in 1973 and served as a Deacon at St. Cecilia’s Parish (Ceciliaville) in Detroit.  Ordination to the Priesthood was celebrated 15 June 1974 in Immaculate Conception Church, Bridgeport, Nova Scotia.  Most Rev. William E. Power, Bishop of Antigonish, was the ordaining bishop.  Others ordained in 1974 include Robert Barringer, Robert Glass, Jack Hanna, Robert Moslosky, Douglas Mosey, Thomas Sepulveda, Norman Tanck, and the late Richard Killaire.

Subsequent to his ordination, Leo served in the following ministries:

Joyful, optimistic, hospitable, out-going, humble, patient, and gregarious are just a few of the words many people used to describe Leo Campbell.  The one word, however, which recurred most often, was love.  Leo was a man of love; he loved his family, his Celtic heritage, music, the Basilian Fathers, the priesthood, and above all, he loved God.

Leo was a people person.  He was most fully alive when he was with other people, especially at celebratory moments.  He had a great ability to bring people together, especially through his music, song, storytelling.  He took great delight in regaling others with stories, many of which suffered from a bit of “Campbell embellishment.”  As Paul McGill noted in his homily at the wake service, “True to his Cape Breton’s roots, Leo loved a party, and nothing gave him more pleasure than to host a barbeque on the back deck at Holy Rosary for family and friends…which included a full evening of music, song, and stories.”

It was also extremely important for him to share his faith with others.  As a priest, he understood himself as an instrument of God, one through whom Jesus Christ worked.  This was evident from the night he was ordained when he was called upon to attend to a person injured in an automobile accident.  He ministered in several settings: Columbus Boys’ Camp, as a high school teacher and administrator, university chaplain, and parish priest.  He had a special ability to reach out to the disenfranchised and alienated.

Just as he loved to bring people together for food, music, song and storytelling, Leo also loved to bring people together through the Eucharist.  For nearly thirty-four years, he celebrated the Eucharist faithfully and prayerfully.  He took his responsibility to preach the Gospel very seriously. The number of people attending both the Vigil Service and the Funeral Liturgy attests to the number of lives Leo touched in his various ministries as a Basilian.

Leo is predeceased by his parents, his sister Catherine, and step-mother, Jackie (Pickup) Campbell.  He is survived by brothers Arthur, Terrance, John, and George, sisters Sheila Murphy and Josephine Stoyles, step-brother, Frank Pickup, step-sister, Micky Barrett, an aunt, Mary Collins, and many nieces and nephews.  To them and to the many other friends, parishioners, and colleagues, the Basilian Fathers extend their sympathy and a promise of prayers.
May Leo rest in the peace of Christ and intercede for his family and for the Congregation of St. Basil.
Contributors: R. Madden, J. Malo, P. McGill, D. McLeod, D. Noelke