“Reverend charged with sexual assault out on bail” & related articles

OTTAWA — A west end reverend has been charged with sexual assault

The investigation was launched after a complaint of a 2008 incident involving a 14-year-boy. At that time, Amesse was with Holy Spirit Catholic Church in Stittsville.

The Archdiocese of Ottawa said in a statement Fr. Amesse was “suspended immediately from all ministry.”

He is currently out on bail, and has been ordered to stay away from children.

Police believe there could be more victims, and anyone with information is asked to contact police.

Boy was 14 at time of alleged sexual assault

An Ottawa priest has been released on bail after being charged with sexually assaulting a teenage boy inside a west end Catholic church in 2008. 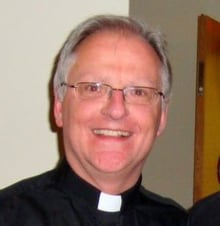 Stephen Amesse is seen here in a photo posted on a blog in 2009. In 2008, it’s alleged that Amesse sexually assaulted a teenage boy. (From Archbishop Terrence Prendergast’s blog)

Investigators received a complaint in February 2014. The boy was 14 at the time of the alleged assault, police said in a media release issued Thursday.

He made a brief appearance in court Thursday via video link. Amesse was dressed in lay clothes, slacks and a bulky sweater, and he looked down at the floor several times.

Amesse suspended from ministry, will live at retirement home for priests

The Crown agreed to Amesse being released on a $5,000 bond with conditions that he not contact the victim or be in contact with any boys or girls under the age of 16.

He will live at a retirement home for priests in Ottawa.

Amesse was suspended from all ministry and his position as pastor at St. Patrick’s Catholic Church in Fallowfield after he was charged on Thursday, according to his archdiocese.

‘These are painful moments,’ archdiocese says

“These are painful moments in the life of a faith community. May the parishioners know the spiritual support of our entire Catholic community,” the Archdiocese of Ottawa said in an emailed statement.

Amesse had a nine-year tenure at Holy Spirit Catholic Church in Stittsville before his departure in 2009. He has also been involved with schools in the community, including Sacred Heart High School.

Ottawa police believe there could be other victims. None of the allegations has been proven in court.

An Ottawa priest has been charged with two counts each of sexual assault and sexual interference involving a minor under 16.

The Ottawa Police Service Sexual Assault and Child Abuse Section laid the charges after a nine-month investigation of allegations of a 2008 sexual assault in a west end Ottawa church.

“In late February 2014, investigators received a complaint and commenced an investigation into allegations of sexual assault involving a reverend and a young boy who was 14 years old at the time of the offence,” said the Ottawa police in a news release.

“When Fr. Stephen Amesse was criminally charged today, following diocesan protocols in such matters, he was suspended immediately from all ministry,” said Archdiocese of Ottawa communications officer Sarah Du Broy in a news release.

“Archbishop Prendergast extends to the parishioners of St. Patrick’s Fallowfield, where Fr. Amesse is pastor, the assurance of his prayers and pastoral care.

These are painful moments in the life of a faith community. May the parishioners know the spiritual support of our entire Catholic community.”

A late vocation to the priesthood, Amesse was ordained in 1999 at age 41. Though he studied at Saint Paul University in the 1980s, Amesse worked in politics for various Liberal politicians, including Industry Minister John Manley and as a researcher for Senator Anne Cools.

Amesse was one of the lay advisors on the Canadian Conference of Catholic Bishops’ document From Pain to Hope that issued guidelines for preventing sexual abuse by priests and male religious. As a lay man from the political world, Amesse participated on one of several working groups that provided consultation to the committee that drafted the document. At the time he was a Senate research assistant.

Before being assigned to St. Patrick’s Fallowfield, Amesse oversaw the construction of Holy Spirit parish in Ottawa’s Stittsville section. He received the 2010 Don Bosco Awards Gala’s “Heart of Youth Ministry” award and served as spiritual director for the Challenge Movement.

OTTAWA – An Ottawa reverend is facing charges in connection with allegations of a historical sexual assault.

Police say the incident is alleged to have occurred in 2008 at a church of the Archdiocese of Ottawa in the city’s west end.

Investigators received a complaint in February alleging a sexual assault involving a reverend and a boy who was 14 years old at the time of the offence.

Police say they are concerned that there could be other victims.

Anyone with information is asked to contact the Ottawa police Sexual Assault/Child Abuse Unit.

Cops have charged an Ottawa priest with sexual assault and sexual interference with a 14-year-old boy in 2008.

Police have been investigating allegations about Father Stephen Amesse, 56, since February.

Sex Assault and Child Abuse section detectives are worried there may be more victims.

Amesse appeared in court for a bail hearing and was released on a $5,000 bond and under strict restrictions to stay away from children under the age of 16, unless supervised.

He has been connected to the Catholic school community for many years, notably at Stittsville’s Sacred Heart High School.

A farewell for “Father Steve” happened in June 2009 at Holy Spirit Catholic Church, before more than 600 people and — according to a write-up at the time — punctuated by a prolonged standing ovation, gifts and “a pledge of everlasting remembrance.”

A Sacred Heart student praised Father Steve for his “interaction with students and his constant visits to the schools,” according to the Ottawa East News report.

Amesse was instrumental in the planning and construction of the multi-million dollar Holy Spirit Church on Shea Rd.

“The board will not comment on an ongoing police matter,” read a statement from Catholic Board director Julian Hanlon. “The Arch Diocese is also actively involved in resolving this case. While this situation is being handled in the justice system, Father Amesse will not be working in or visiting any Ottawa Catholic School Board schools.”

The Arch Diocese also issued a statement, indicating Amesse has been suspended.

“When Fr. Stephen Amesse was criminally charged today, following diocesan protocols in such matters, he was suspended immediately from all ministry.

“Archbishop Prendergast extends to the parishioners of St. Patrick’s Fallowfield, where Fr. Amesse is pastor, the assurance of his prayers and pastoral care. These are painful moments in the life of a faith community. May the parishioners know the spiritual support of our entire Catholic community.”

Anyone with information or concerns connected to the case should call Ottawa cops at 613-236-1222, ext. 594. Anonymous tips can be submitted by calling Crime Stoppers at 613-233-8477 (TIPS) or downloading the Ottawa Police iOS app.