[From Archbishop Terrance Prendergast’s  blogpsot, “The Journey of a Bishop”  25 September 2009] 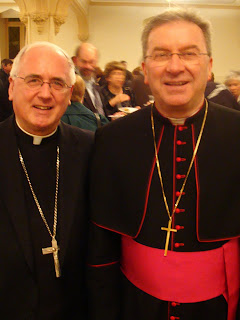 This morning’s Vatican Information Service published the official notice of the nomination of Canada’s Apostolic Nuncio, Most Reverend Luigi Ventura, as the next Apostolic Nuncio to France, a widely-expected transfer that had been speculated on in the Catholic blogosphere since early summer.

Since that time he has endeared himself to the bishops of Canada by his fraternal support, delightful candour and commitment to his ministry of representing the Holy Father and the Holy See among us. He has also been close to some of the new movements in the Church, such as but not limited to, Catholic Christian Outreach(CCO), Famille Marie-Jeunesse, Communion and Liberation (CL), Emmanuel and the Neo-Catechumenal Way. 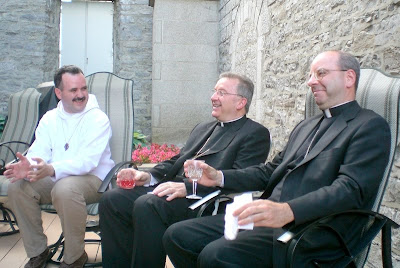 Archbishop Ventura was the Nuncio for Toronto’s 17th World Youth Day in 2002 and was pleased to welcome Pope John Paul II to Canada on that occasion. He has a particular interest in the idealism and zeal of youth, so he was pleased to accept my invitations last October, while I attended the Synod of Bishops, to preside at the commissioning service for youthful missionaries of NET Canada and NET Ireland and to receive the renewal of their missionary commitment on CCO Foundation Day (October 18).

During his time in Ottawa, His Grace has overseen a complete retrofit of the Nunciature, which was badly in need of updating: water and heating, electrical currents, etc. The chapel has been refurbished and the grounds renewed. His successor—let us pray for the one whom the Lord has chosen—inherits an up-to-date physical plant.

We can be sure Archbishop Ventura will not miss Ottawa’s winters and snowfalls, but he will miss the geography he has become acquainted with and the people he has gotten to know as, over the years, he has assisted Pope John Paul II and Pope Benedict XVI in renewing the episcopacy of our country. His is quite an accomplishment: seventy nominations and transfers (with a few more in the pipeline) —all in the space of eight years!

I know I speak for many when I say we will miss him; certainly I shall. May the Lord bless and further his zeal for the Kingdom in service now to the Catholics of France, “the eldest daughter of the Church”.

May Our Lady intercede for him in his new mission.