(His surname is variously spelled as  both MacDougall and McDougall.  I have opted to spell it as McDougall because that is the spelling in the obituary).

Priest, Archdiocese Halifax, Nova Scotia.  Ordained 20 May 1962. 1998 faced two charges of indecent assault and two of gross indecency.  On 18 May 1999, just days before his scheduled sex abuse trial (31 May) entered a plea of guilty to two counts of indecent assault.  The guilty plea was a result of a plea bargain in which Father McDougall, in return for community sentence, would plead guilty plea to two counts of indecent assault:  the two counts of gross indecency were dropped.  Despite his conviction Father McDougall had faculties to ‘say’ Mass. (He  probably also had faculties to hear confessions, but at this time I have no proof that he was hearing confessions after his conviction.)

According to obituary: “served served in the parishes of Immaculate Conception in Truro, St. Lawrence, St. Catherine, St. Agnes, and St. Patrick in Halifax.   He was pastor of St. Thomas More in Dartmouth from 1974-1981, and pastor of St. Pius X in Fairview from 1981-1986.”

After he was reported in the 80s he was sent off to Southdown.   Upon his return to the archdiocese worked with the Marriage Tribunal, assisted at Masses at some parishes, and provided pastoral ministry at Northwood retirement home for several years.

Unless otherwise indicated the following information is drawn from copies of the Canadian Catholic Church Directory (CCCD) which I have on hand,  the obituary (Obit), media (M)  and personal information (P)

May 1999: According to Chronicle Herald article, sentenced to 18 months jail, but can serve time in the community if he complies with strict conditions, including no contact with anyone under age 18, abide by nightly curfew except for medical emergencies, sat home during day except for errands, doctor appointments, Church duties or repairs to his wheelchair, scooter or specially equipped van.  One year probation to follow the conditional sentence  (M).

– In response to victims upset re failure to defrock MacDouglall years ago and permitting him to assist at Masses, Monsignor Martin Currie, then Vicar General for the Archdiocese and now Archbishop of St. John’s Newfoundland said: “We dealt with this as best we could when we became aware of the situation.”  According to media report Monsignor Currie also said that (1) counselling indicated  there was little risk that MacDougall would reoffend,  (2) Father MacDougall was removed from parish work and until he was charged in 1998 worked mainly with the marriage tribunal, (3) Father MacDougall is highly regarded by many young people with whom he has dealt over the years, and (4)  if he returns to work it will only be to rejoin the marriage tribunal .

A Roman Catholic priest who sexually abused two altar boys more than 20 years ago has been placed under house arrest.

The Rev. Robert Joseph MacDougall, 62, of Spinnaker Drive, Halifax, received 18 months in jail Tuesday. However, he will do his time in the community if he complies with strict conditions, including having no unsupervised contact with anyone under 18.

Father MacDougall’s victims, while disappointed he didn’t receive a long jail term, said they are more upset because the church failed them when they first reported the priest 10 years ago.

Rather than defrocking Father MacDougall, the church sent him for counselling. Although he lost his parish, St. Catherine’s on Bayers Road, he was allowed to conduct mass occasionally.

“I just turned around and walked out,” said one victim, who was startled to see Father MacDougall at the altar during a mass some time after reporting the priest to then–bishop James Hayes.

After several years of struggling with the issue, the victims and their families finally decided to go to police two years ago.

“I still feel he should have been removed from the priesthood,” said the man, now 38, who was fondled twice by Father MacDougall in the early 1970s.

“They sent him for counselling but then they brought him back. It was totally irresponsible. There was no formal apology, no support, nothing.”

A similar sentiment was expressed by another victim, now 44.

“I can’t imagine being part of an organization that supports that kind of criminal act. I wouldn’t be surprised if he has another parish 18 months from now,” said the man, who turned his back on the church after he was molested a dozen times from 1969–73.

The conditional sentence will be followed by a year’s probation.

From the Halifax Chronicle Herald 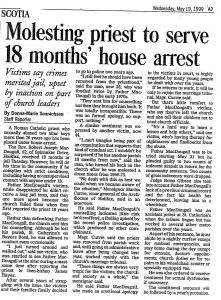