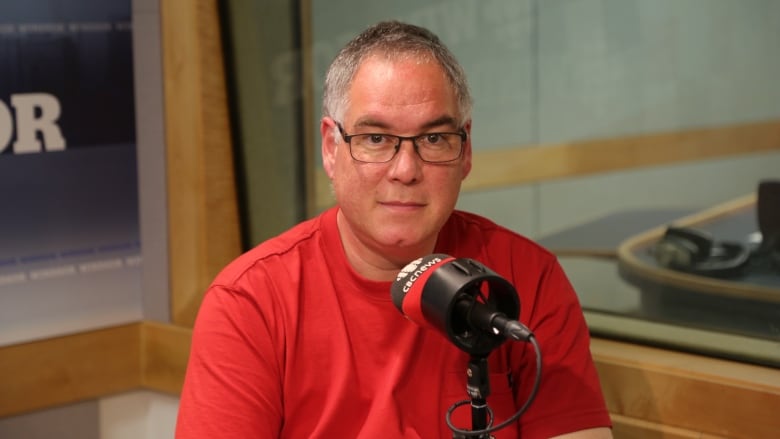 An award-winning documentary about the sexual abuse of children by a Roman Catholic priest has become a source of support for one victim.

Prey — which recently won the $50,000 Rogers Audience Award for best Canadian documentary at the Hot Docs Canadian International Documentary Festival — tells the story of a civil suit against Father William Hodgson ‘Hod’ Marshall by one of his victims, Rod MacLeod.

Patrick McMahon, a Windsor man who was another of Marshall’s many victims, appears in the documentary as he protests outside a few Windsor churches. During one of the protests, he is approached by Father Maurice Restivo who had just delivered mass inside.

Since that initial meeting last summer, McMahon and Restivo have stayed in contact through email. They saw each other again on the CBC’s Windsor Morning.

“It was quite unexpected,” said McMahon, recalling the first time he met Restivo. “We had chosen four churches somewhat randomly, so I had no expectation of who might speak with me.

“Many people watched me and walked away — read my sign and ignored me. So I was quite pleased that Maurice chose to come down and engage me and I had a lot of respect for him for that.”

Restivo says the sign McMahon was carrying caught his attention. It was critical of the Catholic Church and read, in part, ‘Ask me how you can share in my pain.’

“It was certainly uncomfortable,” recalled Restivo. “I saw everybody walking past him, and I thought ‘Somebody has to talk to him.'”

“Not just about my pain, but about the larger issue of the sexual abuse,” said McMahon.

‘Patrick’s question was the right one’

Through their conversation, Restivo learned that McMahon had one goal — for people to understand what his pain was like so they could prevent future instances of sexual abuse.

Restivo asked to share McMahon’s story with the church congregation the following Sunday. The director of Prey, Matt Gallagher, was there to capture the moment.

“So that’s in the film as well,” said Restivo, adding he was “deeply moved” when he found McMahon waiting outside his church again.

Restivo speaking out against his own religious order

In 2011, Marshall pleaded guilty to 17 sex assault charges for crimes he committed against children in Toronto, Windsor, and Sudbury dating back to the 1950s. He died in 2014.

Like Marshall, Restivo is a member of the Basilian Fathers, a religious order of the Catholic Church.

“I knew Hod Marshall. I knew all the other names that they mentioned in the film. I think I’ve met every single one of them,” said Restivo, adding he felt a sense of relief that all of the names had been brought to light but that it was “hard to watch.”

Even though the documentary takes direct aim at the Basilians for allowing some priests to get away with sexual abuse, Restivo says he has no problem speaking out in support of victims.

There is one part of the film which is problematic for Restivo.

“Just the very beginning when Rob Talach, the lawyer, is taking delivery of his brand new Tesla,” said Restivo. “This is just another lawyer making a lot of money.

The judgement against the Basilian Fathers for Rod MacLeod was $2.6 million.

“The judgement…was shocking, was deeply painful and it also shows that the jury thought that this is a very powerful and important moment,” said Restivo. “The victims ought to be getting a lot of [the money].”

In the film, McMahon calls the judgement “glorious”  and he stands by that statement because he says the Basilians “enabled [Marshall] for 50 years.”

“If the only way we can get through to that organization is financially, then that’s what has to happen,” said McMahon, adding his own settlement with the Church was for $405,000.

Mending fences between Restivo and McMahon

Restivo has reached out to McMahon, inviting him and his family over for dinner, but McMahon is hesitant.

“I have a bit of conflicted feelings on this. Personally, I would be very happy to sit down with you and my wife as well,” said McMahon, speaking directly to Restivo. “And when I think about my family sitting with you — specifically, my children — I think back to my own childhood.”

Hear the full interview between Patrick McMahon and Father Maurice Restivo on the CBC’s Windsor Morning:

A healing presence. An unlikely connection between a Church sexual abuse survivor and a Windsor priest who wants to help. A feature interview with Patrick McMahon and Fr Maurive Restivo, 19:41

“I had a constant succession of priests coming to my home and I think of the fact that there was not just one, but two convicted priests who were family friends of mine. Only one of them abused me … It gives me pause when I talk to priests.”

So what could the Basilian Fathers do to fix this? McMahon has two suggestions — one being a legitimate and sincere apology of the actions of Marshall’s “enablers.”

The second, he says, is for religious leaders to stop describing sexual abuse within the church as something which happens to people from “all walks of life, all faiths, all genders.”

“You’re either sticking your head in the sand or you’re deliberately misleading,” said McMahon. “You need to take responsibility for the actions of the people in your order and the people in the church — specifically, the priests.”

Restivo agrees that more needs to be done. “I don’t know if ‘making things right’ can ever happen,” he said. “But certainly what brings out healing is an acknowledgement of errors and a sincere effort to somehow compensate, to make up for, to make amends. But the acknowledgement is a huge part of it and that has to come first.”