It was more than just another night out at the movies at the 15th annual Windsor International Film Festival when Bishop Ronald Fabbro of the London Diocese accepted an invitation from sexual abuse survivor Patrick McMahon to view the documentary Prey at the Capital Theatre on Wednesday night.

Fabbro brought along three priests from London and there was another local group of Basilian priests in attendance to see Windsor-born director Matt Gallagher’s film on the journey of survivors of pedophile priest William Hodgson Marshall.

“It’s important for me because of the survivors,” Fabbro said of his attendance.

“One of whom was in touch with me and I know how much it would mean to him and I was pleased to come and show my support for the survivors.”

Fabbro was invited by McMahon, the first victim to file a successful criminal complaint against Marshall. McMahon also appears in the documentary.

“The community is supportive of making sure this doesn’t happen again,” Fabbro said.

“From the church’s perspective, I think it’s important for us to be here to hear what has happened and to show our solidarity with the survivors.”

Fabbro admitted he anticipated a very uncomfortable evening and that the Marshall case had a very personal impact on him.

“It’s part of my life too,” Fabbro said. “Personally for me, this particular case has impacted me. To know what happened when I was going to high school is really devastating.”

McMahon said the bishop’s attendance wasn’t important for his own healing, but more for the church’s rehabilitation.

“He’s a leader in the church,” McMahon said. “It’s important that he set the right example. I think every priest in the diocese should see this film.

“You need to be here with the members of the community you serve, to see their reaction, to immerse yourself in it and to interact with the victims.”

Marshall, who served as a priest and high school teacher in Windsor, Sudbury and Toronto, pleaded guilty at the age of 88 to multiple sex offences committed over 38 years across the province. Marshall died four years later in 2014.

In Windsor, Marshall served as principal of Assumption and Holy Name secondary schools.

McMahon hopes, in some small way, the viewing of the film by Fabbro and other Catholic leaders is a step forward towards admitting a greater responsibility for a horrific episode for too many.

“I hope it contributes to some self-examination, some understanding,” McMahon said.

“The one thing I’ve yet to see from the church is an acknowledgement of their institutional responsibility. They say, ‘I’m sorry this shouldn’t have happened — we empathize with you. But they don’t say we as a church moved this man around for 50 years and shame on us.’”

Gallagher said no member of the Catholic Church’s hierarchy had seen the film despite his offers of private viewings.

The documentary, which won the Jury and Audience Prizes at its debut in the Hot Docs festival in April, focuses on the efforts of survivor Rod MacLeod and his lawyer Rob Talach pursuing justice delayed.

“The new ending adds something we were all hoping for, vindication for the subject and survivor in the film, Rod McLeod,” Gallagher said.

“I’m glad he (Fabbro) is going to be here to hear the story of the survivors.”

The 69-year-old MacLeod, who attended Wednesday’s screening with Talach, is less hopeful that the Catholic Church has learned any lessons.

“There’s no significance at all to me that he (Fabbro) is here,” MacLeod said.

“Only after speaking to people who have worked inside the Catholic Church that it’s come to me that powers of the Catholic Church have no interests in solving this problem. Their only interest is maintaining their life of privilege and their wealth.

“They have no concerns about the victims. They treated us as a nuisance.”

‘Come forward and speak, that’s the only way that we’ll get real change in this world of ours’ 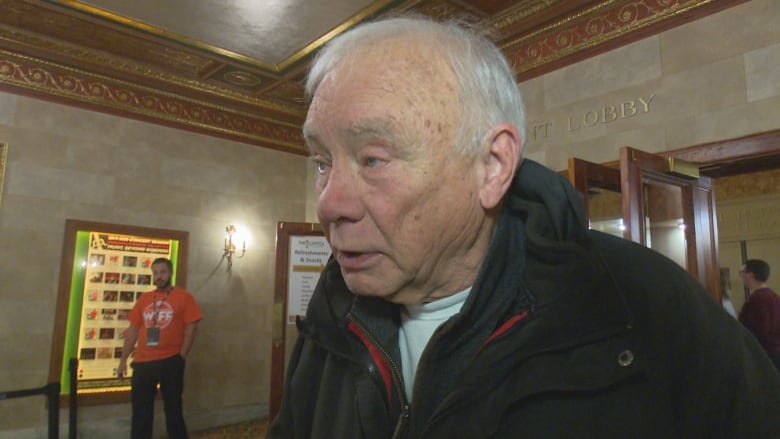 Gary Parent spoke up after the screening of ‘Prey’ to say that he too experienced abuse. (Katerina Georgieva/CBC)

It was an emotional screening of the acclaimed documentary ‘Prey’ during its Windsor premiere at WIFF Wednesday night — following the credits, an audience member spoke up with his own story of abuse.

The film, directed by Windsorite Matt Gallagher, focuses on one perpetrator in particular: Father William Hodgson “Hod” Marshall, a retired priest and teacher, who several years ago pleaded guilty to sexually abusing 16 boys and one girl at schools in Toronto, Sudbury and Windsor.

“It was kind of heart wrenching at times,” said Gary Parent, a member of the audience.

Watching the film brought Parent to his feet upon its conclusion, compelled to address the entire theatre and claim that he too had been abused in the church.

It was an emotional moment that brought many others to stand with him, call out with words of encouragement, and applaud him for sharing his story.

“That was a very dramatic expression of what I’ve been experiencing with people coming up to me after the event and sharing their stories,” said Rod MacLeod, whose lawsuit against the priest was at the centre of the documentary.

He added that Parent’s expression was a “level of intensity” he’d never experienced before.

“We saw how the audience responded…. When someone poured out their soul, everyone in the room was touched and rose to support that individual. That’s what is possible and that’s what we need to do more of when it comes to sexual abuse.”

‘The church really needs to listen’

Bishop of London Ron Fabbro was at the screening, having been invited by one of the other survivors featured in the film.

“It was very emotional for me. Very hard,” Fabbro said, noting that he is a former student of Marshall’s, but would not comment on this specific case featured in the film.

“I think the message for me is that the church really needs to listen to the victims.”

Fabbro said it was important for him to be there to show his support of the survivors.

“Our message to them is certainly we invite them to come forward. We know that they’re hurting, and certainly we want to find justice for them,” said Fabbro.

“We have put in place ways to respond to any victim coming forward, and what we do to prevent what happened in this case, is that we remove the priest who has abused from any future ministry — that moving a priest from place to place, that cannot happen anymore.”

Fabro added that at the Diocese in London, they are doing more to educate priests and employees about how to respond if they have any knowledge of abuse, and making sure that it’s clear that according to the law, they must report abuse to children’s aid or police.

MacLeod said he no longer considers himself a Catholic, but that he would like to see the institution change for the better.

“It’s supposed to be the crucible of our ethics and our beliefs and our way of behaving,” said MacLeod. “[There’s] nothing I would like more than to see that start to happen. I’m not very hopeful though.”

MacLeod said that dialogue must continue around sexual abuse, a subject which he says has been swept under the carpet for decades.

“What I’m saying today is that my experience with telling my story is that people almost invariably come to support and to be with you in whatever way they can. So don’t be afraid of that,” said MacLeod.

“Come forward and speak. That’s the only way that we’ll get real change in this world of ours.” 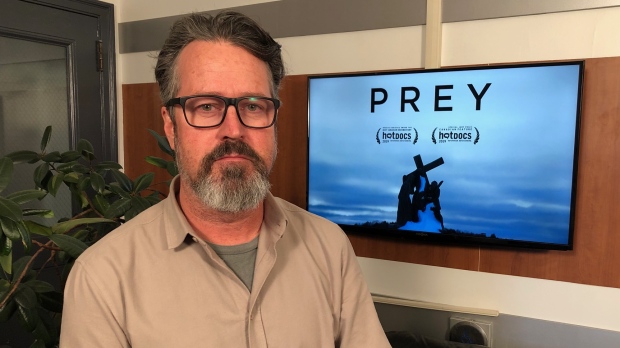 WINDSOR — A Windsor director has returned to his hometown to share his film about a sexual abuse survivor’s court battle with the Catholic Church.

“Prey” by Matt Gallagher screened Wednesday night at the Windsor International Film Festival and has a second screening Thursday at 3:45 p.m.

“Windsor is ground zero for this documentary,” says Gallagher, who grew up in the city.

Gallagher says he was presented with the idea several years ago, but decided it was now the right time do it.

The documentary chronicles victim Rod MacLeod’s civil suit against the church in the case. He was at Thursday night’s screening.

It also features another Windsorite and victim Patrick McMahon.

“For so long these stories have been quietly settled,” says Gallagher. “To finally have this particular story in the public in front of a Windsor film festival audience is something powerful.”

Marshall died in 2014, but the Basilian Fathers of Toronto were ordered to pay the sum of $2.5-million to MacLeod.

Marshall served as a priest and teacher in Rochester, Toronto, Windsor, Sudbury, and Sault Ste. Marie.