Largest award ever of punitive damages against the Catholic Church in Canada. Father Hod Marshall was known as ‘Happy Hands’ ostensibly because of his love for basketball 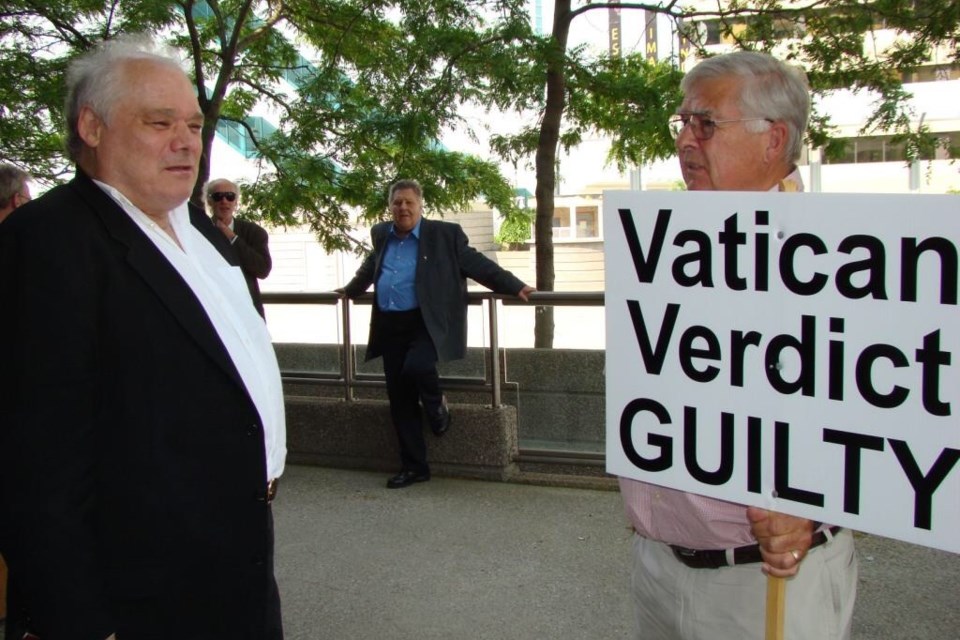 Father Hodgson ‘Hod’ Marshall (left) outside Windsor, Ont. courthouse in June, 2011 after pleading guilty to sexually abusing 16 boys and one girl in places including Sault Ste. Marie, Sudbury, Toronto and Windsor. Photo used with permission from the Sylvia’s Site blog at theinquiry.ca 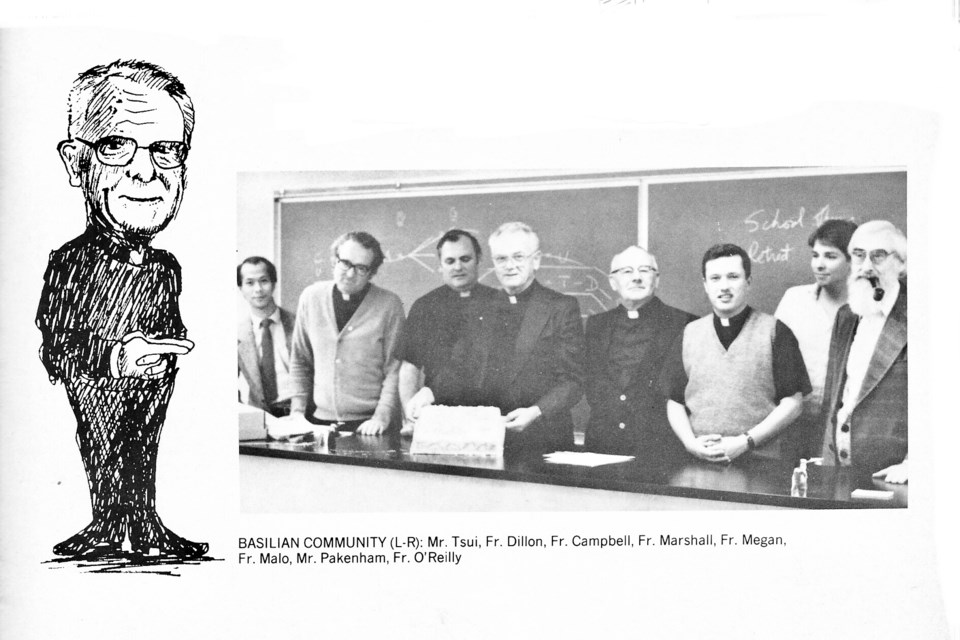 Yearbook photo of 1980s Basilian community at St. Mary’s College. Shown behind Father Marshall is Father Leo Campbell, who succeeded Marshall as principal at St. Mary’s College in 1985 and would himself later be accused of sexual assault in a million-dollar civil suit launched after Campbell died in 2008 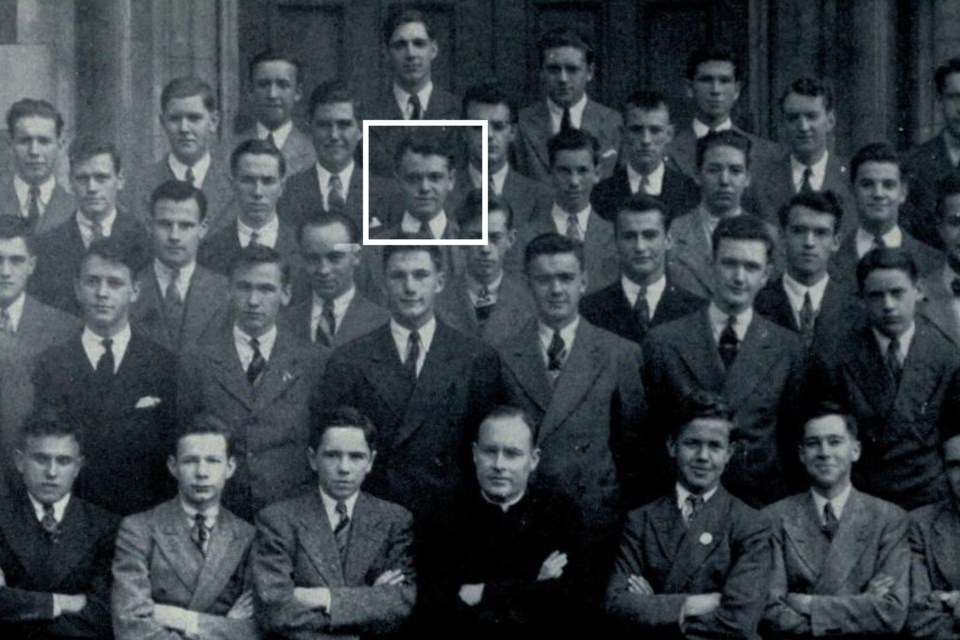 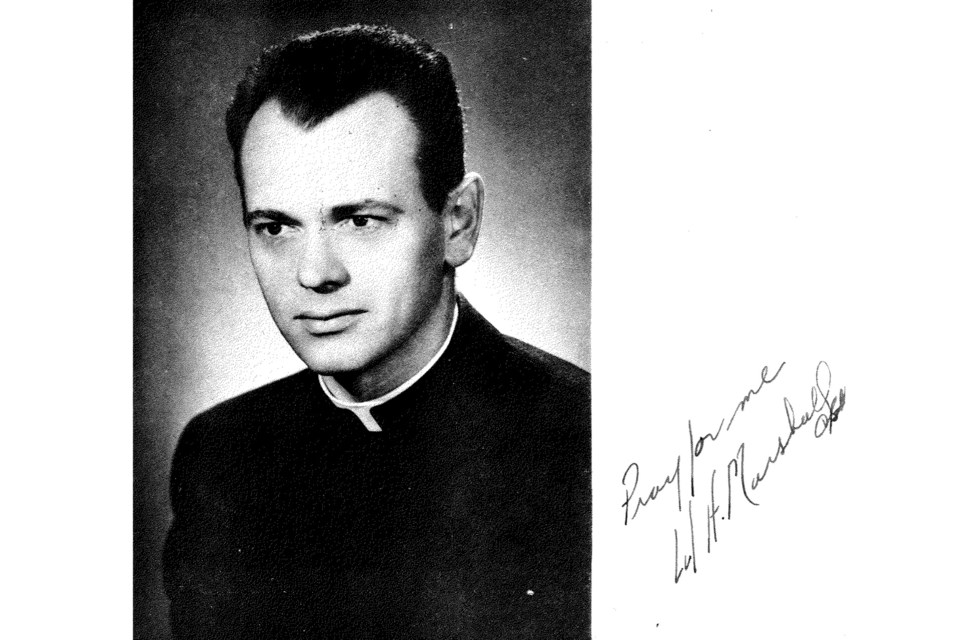 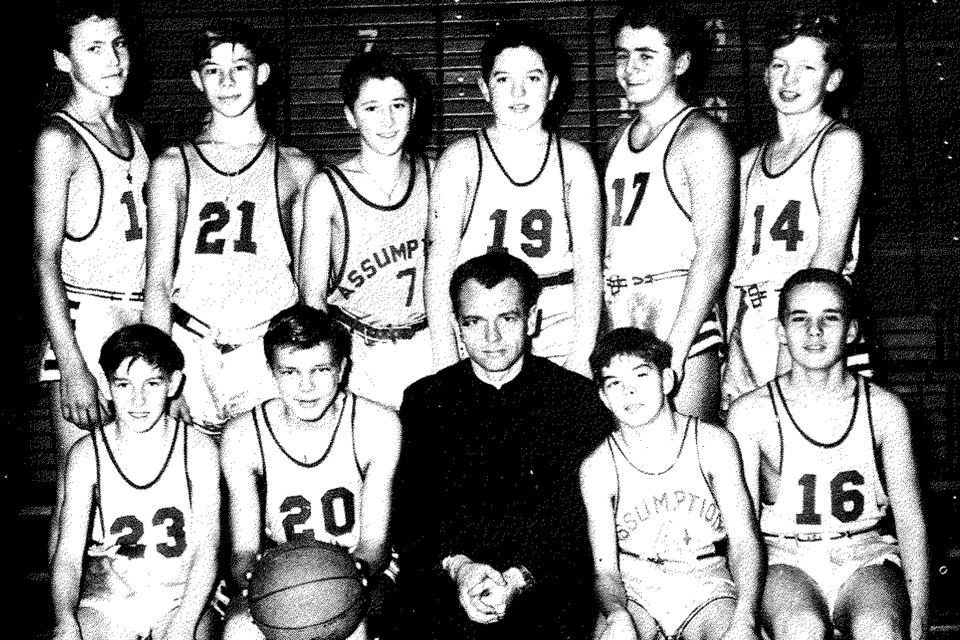 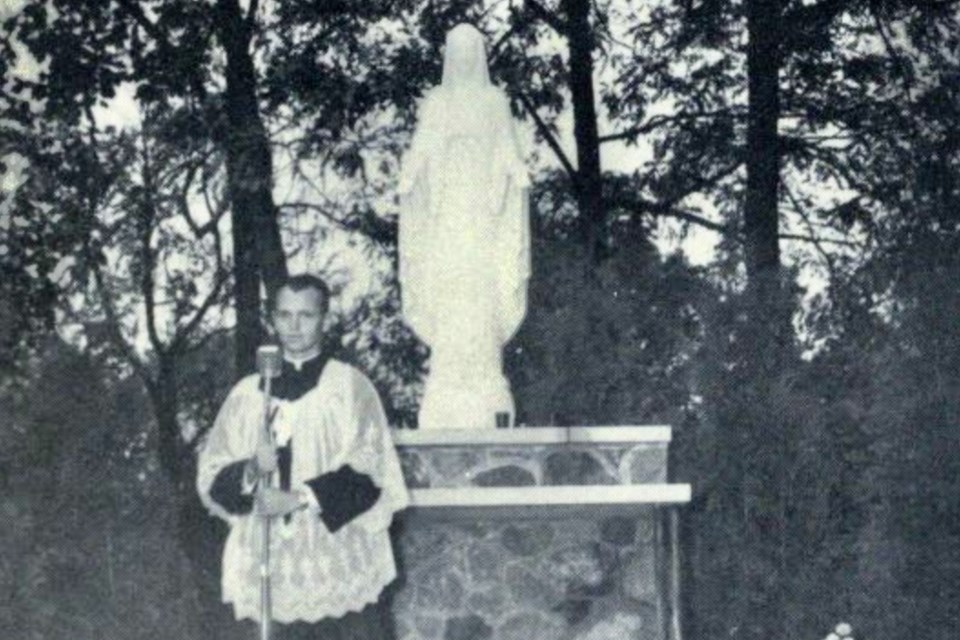 1956 address by Father Marshall at dedication of Shrine to our Lady of Grace, St. Michael’s College High School in Toronto. Photo from St. Michael’s yearbook, The Tower 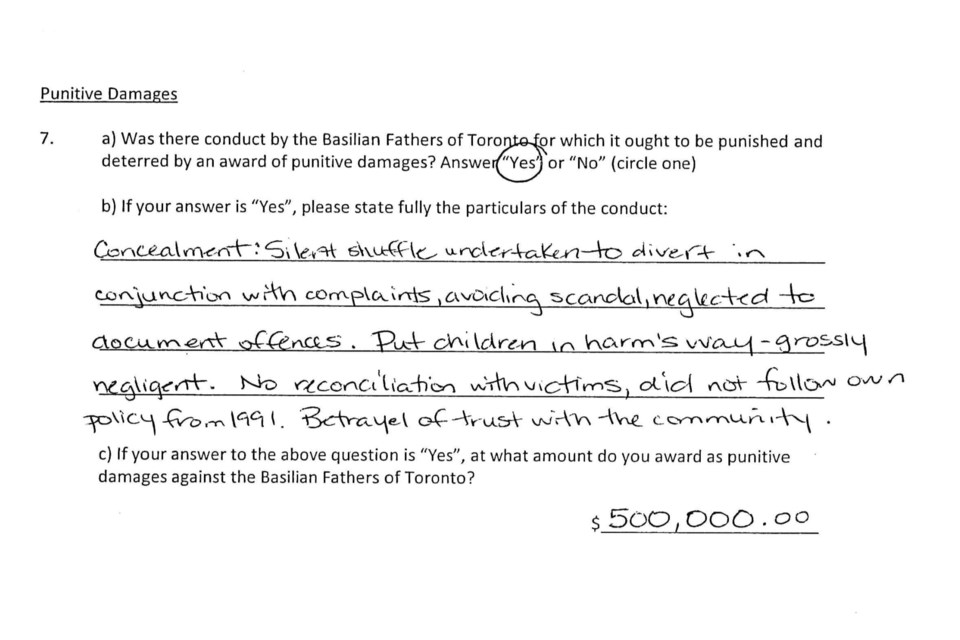 In a landmark civil judgment against the Catholic Church, a 68-year-old man has been awarded $2.6 million for sexual abuse suffered a half-century ago at the hands of a former principal of Sault Ste. Marie’s St. Mary’s College.

Rod MacLeod was a student at Sudbury’s St. Charles College from 1963 to 1967 when he was abused by Father Hodgson ‘Hod’ Marshall, known to students by the nickname ‘Happy Hands’ because of his regular attendance at basketball games.

The judgment awarded Friday to MacLeod by a Toronto jury included $500,000 in punitive damages against the Basilian Fathers of Toronto, who ran both the Sudbury and Sault Catholic high schools.

“This represents the largest award of punitive damages against the Catholic Church in Canada and is the first time that a jury of average citizens has judged the church’s handling of sexual abusive priests,” said London, Ont.-based Beckett Personal Injury Lawyers, which represented MacLeod.

“Punitive damages are a rare and exceptional device only used by the courts to note reprehensible conduct which offends society’s sense of decency. The goal of punitive damages is to punish, denounce and deter,” the law firm said in a written statement.

The award to MacLeod “marks a turning point for the church in Canada, who to date have only been required to pay for the damage they caused victims but have never been fined or punished for their institutional conduct and complicity,” Beckett said.

The jury hearing the civil case was sharply critical of the Basilians for responding to accusations against Father Marshall by repeatedly transferring him to sidestep scandal.

“The jury heard evidence that Father Marshall – who served in Rochester, Toronto, Windsor, Sudbury, and Sault Ste. Marie – was reported a total of six times over his career but was allowed to continue in his role as a priest and teacher,” Beckett Personal Injury Lawyers said.

“The reports of sexual abuse of boys started in 1947, occurred twice in the 1950s, twice in the 1970s and again in 1989 around the time of his retirement from teaching. A further report in 1996 was the most disturbing. Father Marshall, then ministering on the Caribbean island of St. Lucia, ultimately admitted to his Basilian superiors that he had abused upwards of almost 90 boys over his career.”

“The Basilian response was limited with no effort at outreach to the boys, no involvement of police and no publication of the fact that one of their own had left such a wake of devastation across the land,” the law firm said.

Despite repeated allegations about Father Marshall’s relationships with young boys, the priest was quietly shuffled to St. Mary’s College in 1978.

Marshall remained there as principal until 1985, when he was replaced by Father Lee Campbell, another Basilian who was himself later accused of sexual assaults in a million-dollar civil suit launched after Campbell died in 2008.

“The Basilian pattern of response to such complaints appeared to simply be to transfer Marshall,” Beckett said.

“Obviously there was not an iota of concern for the fate of those unfortunate boys,” said Sylvia MacEachern, who blogs exhaustively about convicted and accused pedophile priests at theinquiry.ca, also offering comfort to their victims.

“I really and truly do not understand the minds of Roman Catholic priests who constantly recycled Hod Marshall from school to school,” MacEachern wrote, responding to the latest jury judgment.

In notes attached to its judgment, the jury said the Basilians needed punishment because of:

Notwithstanding his $2.6 million judgment, Rod MacLeod is hoping change will now occur within the Catholic church.

“I hope this outcome will cause the Basilians to rethink their position on how they treat sex abuse victims; stop listening to their legal experts and listen to their hearts and the teachings of Jesus Christ,” MacLeod said.

EDITOR’S NOTE: SooToday does not permit comments on court stories