“Sask. priest to be extradited to Scotland to face sexual and physical assault charges” & related article 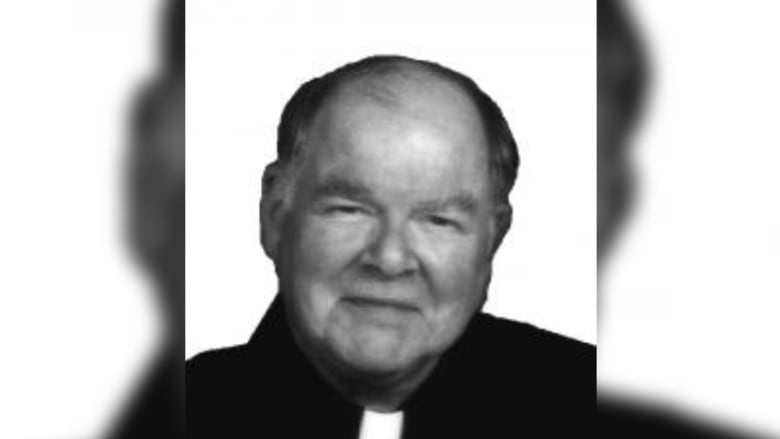 Father Robert MacKenzie will be extradited to Scotland to face charges of physical and sexual abuse. (Archdiocese of Regina)

Authorities in Scotland have charged a long-serving pastor in a Saskatchewan archdiocese with physical and sexual abuse and have been authorized by the Canadian government to extradite him, according to a letter issued by the Archdiocese of Regina.

The Canadian government approved the extradition of Father Robert MacKenzie on March 22.

The allegations in question date back to a period spanning the 1950s to the 1980s when MacKenzie was working at day and boarding schools in Scotland.

According to Archbishop Donald Bolen of the Archdiocese of Regina, MacKenzie moved to Canada in 1988.

He served as an associate pastor at Blessed Sacrament and Holy Trinity in Regina. He was then assigned to work in Marquis and Central Butte, Sask., for one year.

Between 1990 and 2002 MacKenzie practised in Cupar, Dysart and Lipton, Sask. 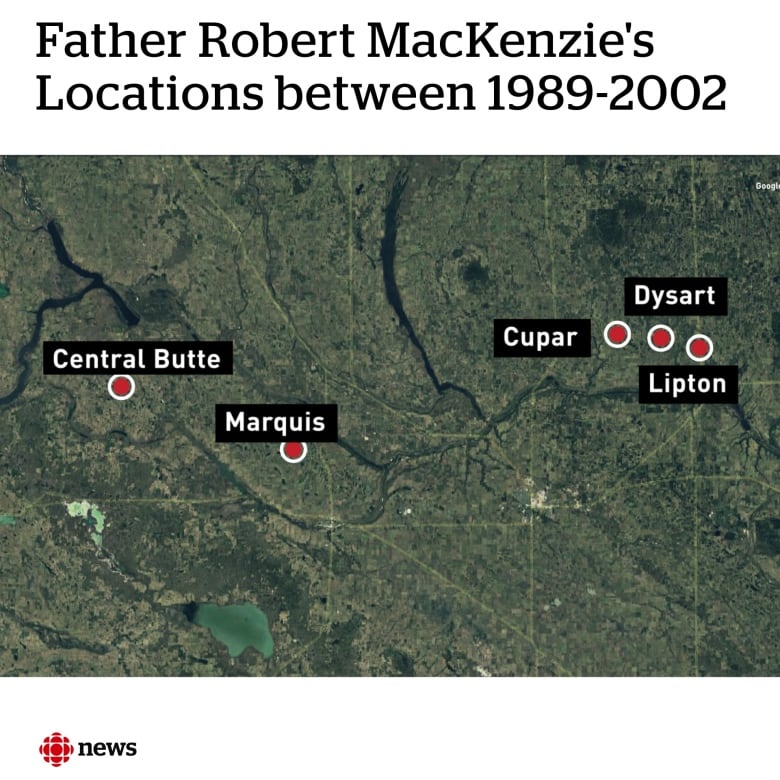 After his retirement, he still served in Cupar conducting mass there until the archdiocese restricted his ministry in 2013 because one alleged victim had come forward.

That restriction was lifted in 2015, before Bolen had taken over as leader of the archdiocese.

“In retrospect I don’t think it was a good idea to lift those restrictions,” Bolen said. “We wouldn’t today. But we’re in the process of learning how to be responsible and place victims first in all circumstances.”

Bolen said the archdiocese was informed criminal proceedings against MacKenzie would get underway in 2017.

MacKenzie, who was then 84, was moved from his church-appointed home to a retirement home where his movements were more restricted, according to Bolen.

In 2017, more information about the allegations MacKenzie faced were brought to the archdiocese’s attention and he was suspended. Specifically, it learned there are as many as 13 alleged victims.

Bolen said he sees MacKenzie, whose health is ailing, from time to time. He said MacKenzie has, all along, denied the allegations against him.

Potential victims given chances to tell their story

Two years ago, the archdiocese held a meeting in Cupar where they shared what they knew about the case, according to Bolen. People were invited to ask questions or share concerns they had. 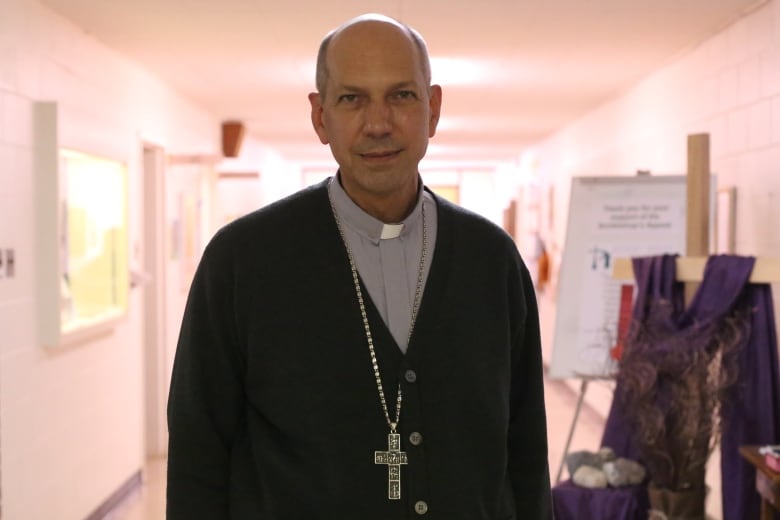 Bishop Donald Bolen said meetings have been held in an effort to provide a safe space for victims of physical or sexual abuse to come forward. (Bryan Eneas/CBC News)

He said no more allegations of physical or sexual abuse against MacKenzie came to light in any of those gatherings.

Bolen said the archdiocese is working to create safe spaces through services for all victims of sexual or physical abuse to come forward.

Bolen said the archdiocese isn’t holding services for victims of physical or sexual abuse by clergy because of the alleged actions against MacKenzie.

“There is a history and legacy of sexual abuse in the way back in the archdiocese, there are many victims and we want to indicate to other victims that they could come forward, and as a church to learn how to walk compassionately, listening attentively to victims,” Bolen said.

Saskatchewan priest might be extradited on decades-old sex abuse charges

A Catholic priest who served for decades in Saskatchewan could be facing extradition on sexual abuse charges relating to his time as a Benedictine monk in Scottish boys’ schools.

The allegations against Father Robert MacKenzie span roughly 30 years — from the 1950s to the 1980s — and involve several complainants who attended two boarding schools in Scotland. That was confirmed by MacKenzie’s lawyer, who stressed that his client maintains his innocence.

“Father Robert MacKenzie categorically denies now, and he has denied under oath to the minister of justice, that he was involved in any sexual impropriety,” said lawyer Alan McIntyre.

The Archdiocese of Regina sent a letter to its pastors and parishes on Monday, advising them that Scottish authorities have charged MacKenzie, now in his mid-80s, with offences relating to sexual and physical abuse. It said the authorities obtained a surrender order last month from Canada’s minister of justice. That is an important step in clearing the way for extradition to Scotland.

But McIntyre said his client will fight extradition. He plans to ask for judicial review of the minister’s decision at the Saskatchewan Court of Appeal.

He also faulted the minister for not taking MacKenzie’s “very poor” health into account.

A spokeswoman for the minister of justice declined to comment specifically on the case, citing a publication ban on aspects of the extradition proceedings.

“What we can confirm is that the Ministerial process in this case is ongoing,” she said.

MacKenzie arrived in Canada in the late 1980s, serving briefly in Regina before a lengthy ministry in Cupar and neighbouring Lipton and Dysart. He retired in 2002, but continued to assist other priests with their tasks.

The archdiocese first learned of the Scottish allegations against MacKenzie in 2013, according to spokesman Deacon Eric Gulash. He said the archdiocese acted to keep MacKenzie away from children. The Scottish investigation subsided shortly after, but picked up steam around 2016. As the allegations became more concerning, the archdiocese relieved MacKenzie of his priestly duties and moved him to a home for retired priests in Regina.

He remains there today, free under certain conditions while his case moves forward.

No allegations of sexual abuse against MacKenzie have surfaced in the communities he served while in Saskatchewan, according to the archdiocese. Father Brad Fahlman, the archbishop’s delegate for clergy sexual abuse, said the church is trying to offer support for anyone who may choose to report abuse.

“There’s efforts made at each of the parishes where he served to make them aware of the situation, and an invitation as far as it can go to invite victims to come forward.”

He said the archdiocese has requested that its parishes put on prayer services designed by and for victims of sexual abuse.

According to what Fahlman has heard, MacKenzie was well-loved in Cupar. Karie Battyanie, who manages a restaurant in town and once worked at the local grocery store, remembers him as a kindly old man who came in every week to buy lottery tickets. Like many, she called him “Father Bob.”

Though the allegations first became common knowledge years ago, her reaction remains one of disbelief.

“A person just doesn’t want to think evil of such a nice man,” she said. “He was just so friendly, happy and just kind of a jolly old guy.”

Battyanie hopes the proceedings in Scotland, if they take place, will give MacKenzie a chance to clear his name.

Media in the United Kingdom have been reporting on abuse in the two Catholic boarding schools — Fort Augustus Abbey School and feeder school Carlekemp — since 2013. Alleged survivors of sexual abuse there have told harrowing stories about a pedophile ring involving multiple monks and horrific abuse of students. MacKenzie worked in both and has been named in the reporting.

In an interview with the Observer, one alleged victim called what he endured “systematic, brutal, awful torture.”

But McIntyre said it was irresponsible for the archdiocese to send out a letter to parishes and the media on what remain allegations, unproven in court.

He noted that his client has spent more than 30 years in Saskatchewan without “a scintilla of evidence” of abuse at any the parishes he worked at. He said the publicity will further tarnish MacKenzie’s reputation.

“All his life’s work will turn to ashes,” McIntyre said.

Fahlman explained that the archdiocese is taking its cue from victims of sexual abuse, and making a gesture of transparency to show it has nothing to hide.

“We’re caught in an in-between position,” Fahlman said. “Unfortunately, perpetrators get off scot free and the victim is further victimized. So we’re walking a very fine line, and our preference is for the victim.

“It’s very gruelling for them to put themselves through this.”

By Stephanie Taylor The Canadian Press

The Archdiocese of Regina says Rev. Robert MacKenzie is accused of physical and sexual abuse from when he worked at two schools in Scotland from the 1950s to the 1980s.

The archdiocese says Scottish authorities have obtained a surrender order from Canada’s Ministry of Justice authorizing the extradition.

Al McIntyre, MacKenzie’s lawyer, said Tuesday that his client is devastated and will be looking for a judicial review of the decision.

He said MacKenzie has lived in Canada for the better part of 30 years without a blemish to his name and maintains his innocence, McIntyre said.

In the meantime, Deacon Eric Gurash of the Regina archdiocese said Scotland is putting together a care plan to transport MacKenzie to stand trial there.

MacKenzie is in his mid-80s. During his time with the archdiocese, he mostly served in small communities around Regina, Gurash said.

Scottish police began investigating MacKenzie in 2013 and criminal proceedings were underway by 2017.

Upon learning about the investigation in Scotland, Gurash said the archdiocese held meetings in parishes where MacKenzie had served to determine if there were any other reports of abuse.

Archbishop Donald Bolen of Regina recently sent a letter to pastors and parishes explaining that MacKenzie was to be extradited. He said MacKenzie was moved two years ago from a rectory to a retirement home, “where his movement and activities were further restricted.”

“As more revelations regarding the outstanding criminal sexual allegations pending against (Father) MacKenzie in Scotland were brought to our attention, his faculties to minister as a priest were suspended,” Bolen wrote.

A spokesman for Scotland’s prosecution service said he could not release details of the charges but did say no trial date had been set.

In a statement to The Canadian Press, a spokeswoman for the federal department also said it could not provide any details on the case because of a publication ban.