priest, Archdiocese Moncton, New Brunswick.  Ordained 18 May 1939.  February 2012 a committee comprised of members of the Knights of Columbus and parishioners at St. Theresa in Cap-Pele, New Brunswick asked for a name change for the Pere-Camille-Leger arena;  they allege that Father Camille Leger sexually abused multiple children in the community between 1957 and 1980. Norbert Gaudet , a member of town council is one of those alleging sex abuse by Father Camille Leger who lobbied to have the name of the arena changed.  Reports indicated that the community was divided on the matter.  Town council decided that a plebiscite would be be held in the  Spring of 2012 to decide if the name of the arena will be changed.  The plebiscite required a vote of  60% to pass.

The plebiscite was not held.  On 11 March 2012 Andre Richard, the current Archbishop of Moncton, told parishioners at Sunday Mass in Cap Pele that he believes the victims.  On 12 March 2012, after a town council meeting, the sign bearing the name of child molester Father Camille Leger was torn down.

Leger was once coach and manager of the town’s now defunct junior hockey team. 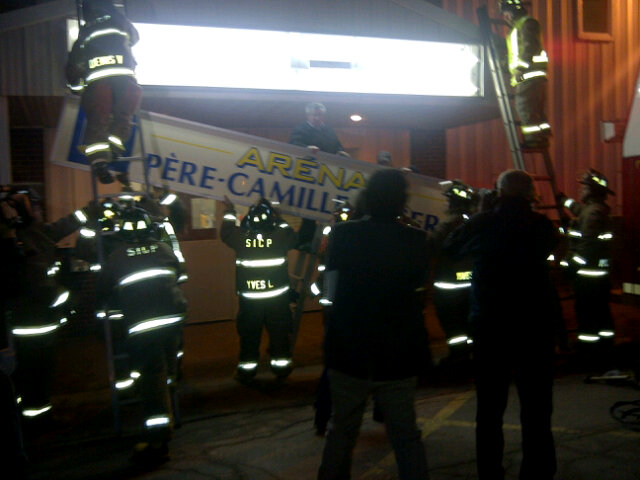 28 November 2017:  ‘He was a monster’: Alleged victim of priest Camille Leger explains why he’s suing church

16 November 2017:  Catholic Church might be too broke to compensate sex abuse victims

15 November 2017:  56 lawsuits against Catholic Church that allege sexual abuse are before N.B. courts

01 February 2013: “EXCLUSIVE – An alleged victim of former priest Yvon Arsenault lodges complaint to the police” & “‘They tried to make me believe that this was normal’” (with original French text)

Undated: Michel Bastarache undated Press Release re abuse by Father Camille Leger and/or other priests and  his conciliation process

15 November 2017:  56 lawsuits against Catholic Church that allege sexual abuse are before N.B. courts

07 December 2012: Article re the Bastarache Report (Moncton) which was to be submitted on Friday 07 Dec. (English google translation and original French text)

04 June 2012: The Church reaches out to alleged victims of Father Camille Leger

29 May 2012:  Normand Brun, a victim of Father Camille Leger, speaks out.  The  archdiocese paid Brun an undisclosed amount of money in 1997 (M)

12 March 2012:  following a council meeting the sign bearing the name of Father Camille Leger was taken down from the arena (M)

1997:  Normand Brown received an out-of-court settlement from the archdiocese for the abuse he suffered at the hands of Father Camille Leger.(Brown spoke out to reveal the settlement  in late May 2012.  Bishop Valery Vienneau, then Father Vienneau and a priest with the Archdiocese of Moncton was involved in the settlement.  Vienneau then became the Bishop of Bathurst, New Brunswick. In 2012  he became Archbishop of Moncton)

late 60s:  Archbishop Andre Richard, while still a priest, assisted at Cap Pele while Father Camille Leger was there

Cap-Pelé to vote on taking priest’s name off arena

A plebiscite on renaming the Cap-Pelé arena will be held on May 14. (Marc Genuist/CBC)

Cap-Pelé will hold a plebiscite this spring on whether to remove the name of a former priest from the village’s arena.

Camille Léger died in 1990, but several people now allege he sexually assaulted children in the community when he worked there between 1957 and 1980.

Léger was never charged with any crimes.

The village council has agreed to put the issue of renaming Aréna Père-Camille-Léger to Aréna de Cap-Pelé to a vote during the May 14 municipal elections.

“We have a black cloud that is on top of Cap-Pelé and we want that cloud to go out and let the sun come in,” said Coun. Norbert Gaudet, who alleges he was one Léger’s victims.

Gaudet claims he’s met dozens of men over the years who say they were also assaulted by the former priest of the Ste Therese d’Avila Roman Catholic parish.

“I can’t tell you the exact number, but it’s a lot,” said Gaudet.

“I don’t have enough fingers on my hand and enough toes on my feet. It’s too much.”

But people never talked about it, said Gaudet.

“Back then, the priest [had] an awful power on the public,” he said.

Even after Léger’s death, people were afraid, he said.

“One on one I was talking with people, maybe 10 years ago, that the name shouldn’t be there and a lot of people were telling me ‘Don’t start that, leave that aside, there’s no need to bring that back.’

Gaudet said he doesn’t want to be reminded of what happened to him every time he goes to the arena to watch his grandson play hockey.

“I don’t like to look at the name and even the picture there is of [Léger]. I don’t want to see that. It brings back memories and I don’t need that.”

Gaudet says he would have preferred if council had made a decision on the renaming. But he’s willing to live with the results of the plebiscite.

“I hope that when it’s done that the people will vote the right way to take the name off.”

A plebiscite vote must have 60 per cent to pass.

This is the second confirmed plebiscite that will be held on May 14.

Grand Manan is asking its citizens whether they want the village council to ask the provincial government to remove the fares on the ferry that connects the island to the mainland.

Grand Manan Mayor Dennis Greene said on Wednesday he think the vote will be close.