“It didn’t surprise me at all,” Rob Talach, of Ledroit Beckett Litigation Lawyers, a London, Ont., law firm, said Friday.

“I sensed there were more (victims). This is a confirmation of where my gut was all along.”

Police allege the incidents occurred between 1977 and 1982 involving two boys ages 10 and 14 at locations in Niagara Falls, Haldimand County and the United States.

During that time, Grecco was a priest at St. Thomas More Church in Niagara Falls, St. Kevin’s Church in Welland and St. Stephen’s Church in Cayuga.

Grecco, who now lives in Peel Region, has been charged with two counts of gross indecency and two counts of indecent assault on a male. He is scheduled to appear in a Cayuga court to answer to the latest charges on Dec. 8.

Grecco previously served as a pastor at St. Mary’s in Welland, St. Alexander in Fonthill, St. George’s in Crystal Beach and St. Vincent de Paul in Niagara-on-the-Lake. He was ordained in 1966.

In March 2010, Grecco pleaded guilty to three counts of gross indecency after he sexually abused three teenaged altar boys in the 1970s and parts of the 1980s in Welland and Cayuga.

He was sentenced to 18 months behind bars and two years’ probation.

Grecco’s victims from that trial launched civil lawsuits in 2010 against the St. Catharines native, the Roman Catholic Diocese of St. Catharines and its former bishop, James Wingle.

Talach, who represented the victims, said the civil suits have been settled but he could not discuss the financial aspects of the cases.

Wingle resigned from his position as bishop by letter in April 2010. It is not known if his resignation was related in any way to the Grecco case.

“Nothing, as far as I know, surfaced about (Wingle) knowing,” Talach said of the previous cases.

“But, this might breathe new life into that because potentially there are two new victims who may have had interaction with the diocese.”

Donald Grecco spent time in jail earlier this decade after being found guilty of sexual assaults involving altar boys in the 1970s and 1980s.

Police say the allegations relate to incidents that occurred between 19777 and 1982, in locations around Haldimand County, Niagara Region and the United States.

During that time period, Grecco worked as a priest at churches in Cayuga, Welland and Niagara Falls.

The alleged victims of these incidents were boys aged 14 and 10 at the time.

With files from CTV Toronto 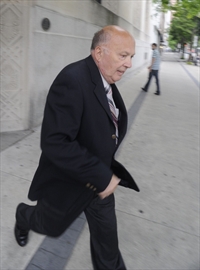 The newest round of charges, like the earlier ones, arise from incidents alleged to have taken place more than 30 years ago while he was a priest in the Niagara and Haldimand regions.

Donald Grecco, 75, faces two charges of gross indecency and two of indecent assault and is to appear in court in Cayuga on Dec. 8.

Grecco, whose family produced three priests and a bishop, left the priesthood in 2000, married and became a grief counsellor in Picton.

In 2008, he was charged with a dozen counts of sexual abuse involving three altar boys, and eventually pleaded guilty to three charges of gross indecency. He was sentenced to 18 months in jail and two years of probation, and was released after spending a little over a year in jail.

The abuse in the original group of charges followed a similar pattern: Grecco would befriend the victim’s family and ask the boys to do odd jobs or take them out on trips. Once alone with a boy, Grecco would initiate play fights that progressed to sexual activities.

Victim impact statements filed with the court revealed his grown victims suffered from insomnia, loneliness and an inability to connect with their own children.

All three victims filed civil suits against Grecco and his bishop, at least one of which was settled.

The new charges relate to incidents alleged to have occurred while Grecco was a parish priest at St. Stephen’s in Cayuga, St. Kevin’s in Welland and St. Thomas More in Niagara Falls.

Officers with the Haldimand County OPP have laid charges against a former priest stemming from a series of historical sexual assaults.

75-year old Donald Grecco of Peel Region has been charged with two counts of gross indecency and two counts of indecent assault on a male based on incidents alleged to have occurred between 1977 and 1982.

Police have been investigating the assaults for several months, which are said to have occurred against boys who were 10 and 14 at the time. The assaults took place at locations in the Niagara Region, Haldimand County, and the United States, according to OPP.

Grecco will appear in court in Cayuga in December to answer to the charges.