No. Never. Not true. It didn’t happen.

Eric Dejaeger stuck to his guns while on the witness stand Jan. 21, saying over and over, for the benefit of his lawyer, that he did not commit repeated sexual offences against dozens of complainants who have testified against him.

Dejaeger, a former Oblate priest who faced 80 charges during a trial that began in November 2013 — most of them sexual offences against children in Igloolik — has pleaded guilty to eight.

After a five-week break, the judge-only trial before Justice Robert Kilpatrick resumed this week at the Nunavut Court of Justice in Iqaluit with defence lawyer Malcolm Kempt presenting his case.

Kempt began Jan. 21 by taking evidence from the man at the centre of this emotional trial: Dejaeger.

Wearing a prison-issued blue sweat suit, his large grey beard stretching to his chest, the 66-year-old walked to the stand with ease, put his hand on the Bible, stood upright, stated his name, and when asked to swear to tell the truth, promptly said “I do.”

Half an hour into the examination, Kempt asked about the eight charges Dejaeger pleaded guilty to at the beginning of the trial.

“I want to take my responsibility for them,” Dejaeger said.

Dejaeger described how each one of those eight incidents unfolded.

In each incident, the complainants, all boys, wandered individually up to his room, alone, at St. Stephen’s Church in Igloolik, he said.

He said that’s when he touched each boy in the crotch area, over their pants. He added that he touched one of the boys in a sexual way on his buttocks — but again, over the pants.

The eight complainants claimed more than just inappropriate touching, however.

Defence lawyer Malcolm Kempt repeated witness testimony about how some of them said he penetrated their buttocks and touched their penises under their pants.

Kempt described how one witness alleged he had been sexually touched 10 times or more during “sleepovers.”

Most of his answers were similarly brief, consisting of only two or three words. He spoke English with a Flemish accent and barely moved during three hours of questioning.

Dejaeger spoke softly and clearly into the microphone, although at one point, Kempt had to tell Dejaeger to slow down for the court reporter.

Addressing allegations made against Dejaeger in court before Christmas, Kempt said some complainants had testified that Dejaeger, making threats, warned them not to tell others about the touching, and that they had been assaulted as well.

“I’ve never threatened anybody, but for sure not those boys,” Dejaeger said.

While his memory seemed clear on that point, he could not recall the order in which he sexually assaulted the eight witnesses, or in what time of year.

Dejaeger said he “never do anything to those people,” when asked about charges alleged by other complainants.

Kempt said many of the complainants were female — noting that eight of the charges he pleaded guilty to involved males — and asked Dejaeger to respond to that.

“Except that it didn’t happen, I don’t know,” Dejaeger said.

Dejaeger said he did pick up children and put them in his lap, but never in an inappropriate, sexual manner.

He also denied charges of bestiality.

“No. I like my dogs, but not in that way. I never had anything sexual to do with dogs,” Dejaeger said.

While giving evidence, he denied allegations that he fed children pills or hypnotized them.

He also denied that he told children they would go to hell and added that the Catholic mission was a positive place. He said he handled situations “the way Jesus would do it.”

Also, in response to an allegation that he put kids in a dark room and locked them inside, he said, “No, I never did that.”

Dejaeger was found guilty of sexual assaults stemming from the 1980s, when he worked as a priest in Baker Lake.

He said he feels “very bad” about those incidents, but since then he said has taken counselling sessions and had phallometric testing completed while in prison.

“I can say, honestly, nothing has happened since,” Dejaeger said.

After a lunch adjournment, Dejaeger’s defence lawyer went through each witness allegation, to give his client an opportunity to speak to each one.

Dejaeger remained defiant and said little more than “no,” “not true,” “no, didn’t do that,” and the occasional “no, I didn’t do anything like this.”

In one of the allegations, Kempt said the witness alleged that Dejaeger wanted to get a gun and kill people.

He also said he “never, ever” invited people to the church for food other than for special occasions like Easter or Christmas.

Kempt also brought up a witness who said Dejaeger had drugged and raped her, then put her on a toilet when her vagina started bleeding.

To the allegation of intercourse, either vaginally or anally, Dejaeger said: “Oh, no, no.”

When asked if Dejaeger did, in fact, put her on the toilet to control the bleeding from her vagina: “No, I didn’t.”

As to drugging the girl with pills: “I don’t think there were pills in the mission.”

Dejaeger had said earlier he didn’t “even think there were aspirins in the mission.”

When Kempt questioned Dejaeger about a woman who said she had to defecate on him to escape being abused, Dejaeger denied that happened, saying, “No, no.”

Dejaeger also denied throwing her into a slushy river, threatening her with violence, or telling her never to tell anyone about the incident.

The resumption of the trial this week began with Kempt filing “non-suit applications” to seek dismissal of 10 charges.

Justice Kilpatrick threw out three charges on Jan. 30 related to a witness who did not testify and then dismissed a fourth charge on Jan. 21.

Kilpatrick also amended one of the charges from sexual intercourse to buggery.

Kempt will likely finish his questioning of Dejaeger on Jan. 22, when Crown prosecutors will begin their cross-examination.

IQALUIT, Nunavut – A former priest accused of sexually abusing dozens of Inuit children in a remote Arctic community took the witness stand Tuesday and denied all charges against him.

Eric Dejaeger pleaded guilty to eight counts when his trial began in November, but on Tuesday he said he committed none of the remaining 68 assaults he’s accused of. They stem from his time in Igloolik, where he was posted as an Oblate missionary between 1978 and 1982.

“It’s not true at all,” said Dejaeger, speaking quickly with a Flemish accent.

Dejaeger confirmed earlier reports from The Canadian Press that legal officials tacitly encouraged his flight to Belgium in the mid-1990s after he had served time for one set of sex offences and learned that he would be charged again.

“I was free,” said the Belgian-born accused, referring to the time in 1995 after he was released from prison.

“I was out of jail. I was out of probation. I went to see my lawyer again. He told me, ‘You have at least two years, or write me a card from Belgium.’ I understood him.”

Dejaeger returned to his home country, where he fulfilled several functions for the Oblates until he was returned to Canada in 2011.

Earlier in the trial, Crown prosecutors produced a long line of witnesses from Igloolik, who recounted a list of terrible assaults. Court heard Dejaeger abused children in his bedroom, on a piano stool, a kitchen counter, in hunting camps, and in a common room while other children coloured pictures of Bible stories nearby.

Those allegations ranged from furtive fondling to the savage sodomy of a little girl duct-taped to his bed. Several people testified Dejaeger forced them to watch him sexually assault his dog.

Witnesses said he used hunger to lure them, then threatened them with hellfire or separation from their parents if they told.

On Tuesday, Dejaeger said none of it happened.

“I like my dogs, but not in that way,” he said, sometimes speaking so quickly that court staff recording the proceeding had to ask him to slow down.

Defence lawyer Malcolm Kempt took his client through the particulars of each of the charges, all of which Dejaeger denied.

The former priest went on to question the memory of Crown witnesses, who were all young children at the time.

He said the mission in Igloolik had no piano. He denied teaching religion classes to small children.

To accusations that assaults took place in the mission’s confessional, Dejaeger said he never gave confession since his Inuktitut wasn’t good enough. To charges from several witnesses that he gave them a pill before assaulting them, Dejaeger said he couldn’t have found an Aspirin in Igloolik, let alone a tranquilizer.

He couldn’t have assaulted a boy in a tent at a hunting camp, said Dejaeger, because the boy “was still bed-wetting so it wasn’t very pleasant.”

To charges that he rewarded victims with cookies, Dejaeger responded that priests in Igloolik had to bake their own and he doesn’t know how.

He denied that he commonly wore his priestly robes, a frequent point of witness testimony.

Describing the assaults he did plead guilty to, Dejaeger said that, in every case, they involved the victim appearing alone and unannounced at his room. He fondled the victims over their clothes and that was it, he said.

“All in the bedroom, all alone, all by them wandering into your room and you take advantage of them?” asked defence lawyer Malcolm Kempt.

Dejaeger’s testimony was preceded by a defence request to drop 10 charges. Justice Robert Kilpatrick, who is hearing the case alone, agreed Monday to drop three of them because the witness didn’t appear to testify. The judge dropped another charge Tuesday.

The trial includes allegations from Feb. 19, 1995, when Dejaeger was originally charged with three counts of indecent assault and three counts of buggery, a charge no longer in the Criminal Code.

That year, Dejaeger had just completed a five-year sentence on 11 counts of sexual assault and indecent assault against children in Baker Lake, where he was posted after Igloolik.

He was scheduled to return to court on the Igloolik charges on June 13, 1995, but never showed. By then, he was in Europe.

Dejaeger was eventually returned in January 2011 when a Belgian journalist realized that Dejaeger had lost his Belgian citizenship in 1977 when he became a naturalized Canadian. He had been living in Belgium since 1995 without a visa and was kicked out.

Former priest pleads guilty to 8 charges of molestation, says other charges ‘not true at all’ 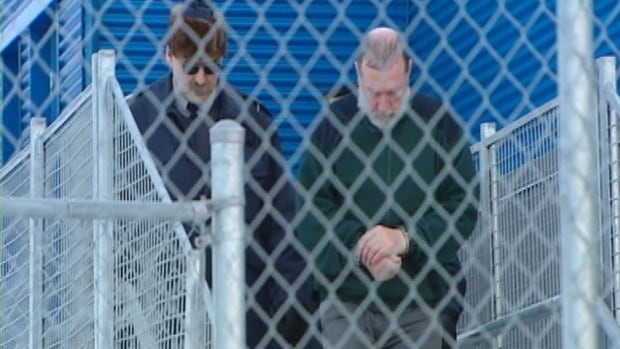 Eric Dejaeger is escorted outside the Iqaluit courthouse in 2011. The former Roman Catholic priest spoke in his own defence on January 21. (CBC)

Former Catholic priest Eric Dejaeger spoke in his own defence January 21 at his trial in Iqaluit.

His appearance marked the first time he has addressed the court.

He has pleaded guilty to eight of the charges.

Dejaeger told the court he wanted “to take responsibility for his actions,” relating to those eight charges.

Defence lawyer Malcolm Kempt lead the former oblate priest to discuss his eight guilty pleas, one by one.

According to Dejaeger, the eight incidents of sexual abuse took place in his bedroom at the mission and involved only young boys.

In each case, Dejaeger claimed he touched the boys on the crotch, over their pants. He told the court this happened once only with each child.

Kempt then questioned Dejaeger about the other charges of sexual abuse, some of which involved girls. Dejaeger said “that didn’t happen.”

Dejaeger told the court the allegations are “not true at all” and presented a very different version of events that what is alleged by complainants and the prosecution.

He also told the court he never was involved in any sexual acts with dogs.

Dejaeger spoke calmly and several times stumbled as his first language is Flemish. On those occasions the court Justice asked him to slow down and speak more clearly.

Later this week Dejaeger will face cross-examination from the prosecutor.