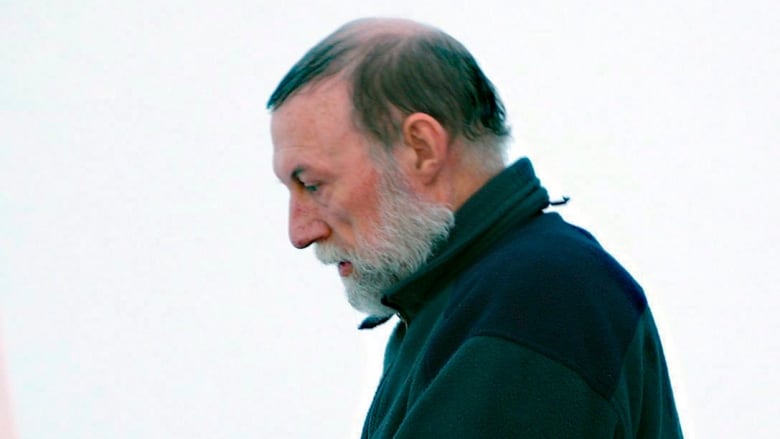 Catholic priest Eric Dejaeger leaves an Iqaluit, Nunavut courtroom Jan. 20, 2011 after his first appearance for 6 child sexual abuse charges in Igloolik dating back to the 1970s. He recently lost an appeal for his 19-year sentence. (Chris Windeyer/Canadian Press)

The Nunavut Court of Appeal has dismissed another appeal from ex-priest Eric Dejaeger, who was convicted of 24 counts related to the sexual abuse of Inuit youth and one adult woman during his time with the Roman Catholic mission in Igloolik more than 40 years ago.

In September, the court did not grant Dejaeger a new trial after he appealed his conviction. This time, the court also threw out an appeal for his 19-year sentence.

In 2015, Dejaeger was sentenced for 32 counts out of the 80 he was charged with. He pleaded guilty to eight counts, and not guilty to 24. He was sentenced to 19 years, but with time served that number was pared down to eight.

Dejaeger appealed the sentence, arguing the judge erred by not taking into consideration a previous sentence for his conviction for similar crimes he committed in Baker Lake. In the early 1990s, Dejaeger was sentenced to five years for crimes he committed against children in that community.

Dejaeger argued an absence of criminal convictions since his release from prison in 1992 from the Baker Lake charges shows a capacity for rehabilitation. He said that should have been taken into account in the sentencing for his Igloolik convictions.

The appeal judges dismissed this argument, pointing out Dejaeger was living in Belgium, in breach of parole, unlawfully at large and the subject of extradition proceedings during this period.

“It was not possible for the trial judge to conclude that he was capable of being rehabilitated in the face of evidence of a complete lack of remorse and the illegality of his flight from Canada,” states the decision.

In a six-page Nunavut Court of Appeals decision dated Nov. 22, three judges dismissed the appeal, finding “the trial judge carefully considered the evidence in the context of each of the 80 counts before him and that his reasons are clear, comprehensible and sufficient.”

The 71-year-old was eligible to apply for parole as of Sept. 30.

in this news story, the Flemish-language newspaper De Morgen described Eric Dejaeger as “Pater Pedo,” hiding in plain sight in the Belgium town of Blanden, where the Oblate order of Roman Catholic priests maintained a residence. Dejaeger lived at that Oblate residence while on the run from Canadian authorities.

Eric Dejaeger enters the Nunavut courthouse during one of his court appearances in 2013. (FILE PHOTO)

The notorious serial pedophile, ex-Nunavut priest Erik Dejaeger, is now a two-time loser at the Nunavut Court of Appeal.

That’s because of two written judgments that the appeal court released on Monday, Nov. 26: one says no to 70-year-old Dejaeger’s appeal of a 19-year prison sentence, while the other says no to his appeal on 24 convictions for sex crimes against Inuit children, most of them in Igloolik.

After a hearing in Iqaluit this past Sept. 25, a panel of three appeal court judges orally dismissed Dejaeger’s appeal on 24 convictions that Justice Robert Kilpatrick entered against him on Aug. 12, 2014, following a long trial that began in November 2013.

Dejaeger had also appealed Kilpatrick’s findings of fact in eight additional charges to which Dejaeger had pleaded guilty.

The Nunavut appeal court released its written reasons for that decision on the verdict appeal today.

In their judgment, the appeal court found that Kilpatrick, in his massive 212-page trial decision, had carefully considered the evidence in each of the original 80 counts that Dejaeger faced and found that Kilpatrick gave reasons that are “clear, comprehensible and sufficient.”

This means Dejaeger’s convictions on the following crimes still stand:

• Ten counts of indecent assault on a female

• Five counts of indecent assault on a male

• Three counts of buggery on a male

• One count of bestiality

• One count of sexual assault on a female

• One count of unlawful confinement

In the other judgment, which the appeal court had reserved until this month, they found the 19-year prison sentence that Kilpatrick imposed on Dejaeger in January 2015 is “fit and proper.”

“He was a wolf masquerading as a good shepherd. His life as a priest was a lie,” Kilpatrick, then the senior judge of the Nunavut court, said in his January 2015 decision, which sentenced Dejaeger on 32 convictions: the 24 charges Dejaeger had been found guilty of after the trial, plus the eight he pleaded guilty to.

In it, Kilpatrick settled on the 19-year “global” sentence after whittling it down from a 75-year-plus sentence that could have been imposed by simply adding up all the appropriate penalties.

After that, he gave Dejaeger about eight years credit for time already served, which meant the ex-priest had about 11 years left in prison.

But Dejaeger’s lawyer argued that his client should have got at least a five-year reduction to account for an earlier five-year sentence he had served for crimes committed against Inuit children in Baker Lake in the mid-to-late 1980s.

The Igloolik crimes, though prosecuted much later, had been committed earlier, between 1978 and 1982.

That meant Kilpatrick had to sentence Dejaeger on the Igloolik convictions as if he were a first-time offender.

But he was also sentenced for the Baker Lake convictions as a first-time offender, the appeal court said.

“If we were to accept his argument that the Baker Lake sentence should serve to reduce his sentence for his Igloolik offences, he would receive a benefit which could well result in an unfit sentence,” their judgment said.

And they also rejected the idea that Dejaeger should have received a lighter sentence because of the absence of any criminal convictions after 1992.

That’s because, in 1995, after being charged with eight new crimes he committed in Igloolik, Dejaeger fled Canada for Belgium, the country of his birth, an act that broke the law in several ways.

In Belgium, he remained unlawfully at large for 17 years, ignoring a series of Interpol arrest warrants and enjoying the protection of the Oblate order of Roman Catholic priests.

“We further observe that Mr. Dejaeger can hardly be considered to have been living a crime-free life back in Belgium during that period, considering that he was unlawfully at large, in breach of both his parole and bail conditions in Canada and was the subject of extradition proceedings,” the appeal court found.

Dejaeger was forcibly returned to Canada in 2011, after the Belgian government discovered that Dejaeger was not a Belgian citizen and expelled him from their country.

That’s because Dejaeger had renounced his Belgian citizenship many years earlier and had become a Canadian citizen.