“Anybody can get to heaven. There’s no Catholic section in heaven.”

In Nunavut court Jan. 22, Crown prosecutor Doug Curliss grilled Eric Dejaeger on his work at St. Stephen’s Catholic Church in Igloolik between 1978 and 1982, questioning what he did as a priest during his time there.

Dejaeger returned to the witness box on the morning of Jan. 22 so Crown prosecutors could begin their cross-examination of the former Oblate missionary, who gave evidence in his own defence Jan. 21.

The trial began in November 2013. Since then, Dejaeger has pleaded guilty to eight counts on the 80-count indictment. Another four charges have since been dismissed by Justice Robert Kilpatrick, who is handling the trial on his own, without a jury.

Curliss asked several times if Dejaeger ever heard confessions as part of his job with the church — Dejaeger replied that he never did.

That could be because he could not speak Inuktitut — even though he spoke English, as well as most people his age and younger at the church, he said.

Confession is a sacrament in the Catholic faith. It’s when people admit they have committed a sin, so they can be absolved by a priest.

“I think the language was a problem,” Dejaeger said.

Dejaeger said most people went to Father Robert Lechat for confessions because he had been there longer and was older.

But Dejaeger said confession was more of a counselling service.

And even when Lechat left Igloolik for Europe for eight months between the fall of 1980 and the summer of 1981 — leaving Dejaeger as the only priest in Igloolik — Dejaeger did not perform a single confession, he said.

“I didn’t find it unusual,” Dejaeger said. “I was a young priest who was supposed to learn things.”

Curliss said over the period when Father Lechat was away, Christmas and Easter period occurred — a time when Catholics usually go to confession.

But Dejaeger maintained he never heard confessions with anybody in Igloolik. Only afterwards, when he left for Baker Lake in the 1980s, did he perform confessions.

Dejaeger said he would baptize children, manage weddings and do chores around the church.

The role of a priest as a missionary, Dejaeger said, is to make the church able to run by itself.

“Our task was, and still is, to get people running the church,” Dejaeger said.

Dejaeger said he would never force people to come to church. When asked if he thought he was a good Catholic, Dejaeger nodded his head and replied, “Yeah.”

“I was there to serve the people,” Dejaeger said.

To that, Curliss replied, “When you went to school for six years [to become a priest], washing dishes wasn’t a class, correct?”

At one point, Curliss asked Dejaeger if a priest was just a “fancy social worker.”

Dejaeger, later on in questioning, said that he would counsel others about their social life — for example, if there was a fight between a husband and a wife.

Curliss and Dejaeger also debated heaven and hell, and how one would get into heaven.

When asked if Dejaeger ever taught the kids the concept of heaven or hell, Dejaeger said, “No, no, no.”

Curliss then asked what Catholics have to do to get into heaven, and asked if they would ever need forgiveness — or need to confess their sins before they die.

Dejaeger said it doesn’t matter if sins are confessed before one dies but you have to “ask for forgiveness,” in order to go to heaven in the afterlife.

“Anybody can get to heaven,” Dejaeger said. “There’s no Catholic section in heaven.”

Dejaeger mentioned that being a priest was a “calling.” He also said he was interested in the North — while most Belgium missionaries went to Africa, he wanted to go to the North.

“It was attractive to me to come to the North,” he said.

Dejaeger’s cross-examination was expected to continue through the afternoon of Jan. 22. 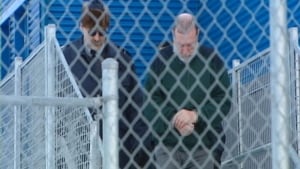 Eric Dejaeger is escorted outside the Iqaluit courthouse in 2011. Under cross examination Wednesday, the former Oblate priest denied having listened to confessions while working in Igloolik, Nunvaut. (CBC)

Former Catholic priest Eric Dejaeger was back on the stand this morning facing cross examination in Iqaluit.

The 66-year-old is facing dozens of charges related to alleged sexual abuse of children in Igloolik, Nunavut three decades ago.

Some of the complainants have told the court they were abused by Dejaeger while he heard their confession.

Today, Dejaeger denied having listened to confessions while working in Igloolik at the mission for four years. He says that was the job of the main priest, Father Robert Lechat.

Dejaeger was the priest in training. He says he conducted mass, performed baptisms, marriages and provided counselling.

Crown prosecutor Doug Curliss asked if he heard confessions over religious holidays like Easter and Christmas. There was one period when Lechat was gone eight months straight.

Dejaeger said it was not unusual for there to be no confessions. He said he didn’t speak Inuktitut, which is one reason why he didn’t hear confessions.

Now says he should have learned Inuktitut instead of English.

Dejaeger told the court his role in the community was to serve the people and that becoming a priest was his calling. The crown will continue the cross examination this afternoon.