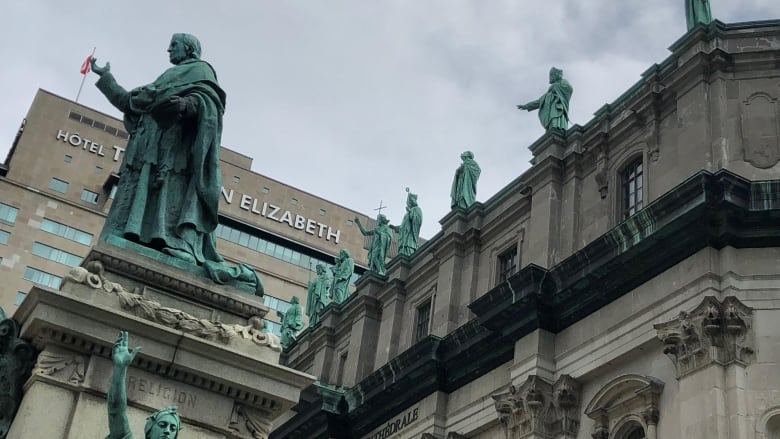 The victim, known by the initials A.B., says Montreal’s auxiliary bishop and vicar general, Thomas Dowd, asked him to attend a meeting at a Montreal archdiocese building located behind Mary Queen of the World Cathedral. (Louis-Marie Philidor/CBC)

A.B. says he had no idea what he was walking into when he was asked by the auxiliary bishop of the Roman Catholic Archdiocese of Montreal to attend a meeting with church officials in late 2016.

He’d recently come forward to make a police complaint about the years of sexual abuse he’d endured as a child at the hands of a Montreal priest.

He was told the Church now needed to do its own internal investigation of the matter.

“It seemed like it was just going to be a normal day, to go talk to people,” the man said in an exclusive interview with CBC/Radio-Canada. He is known by the initials A.B., as his identity is protected under a court publication ban. 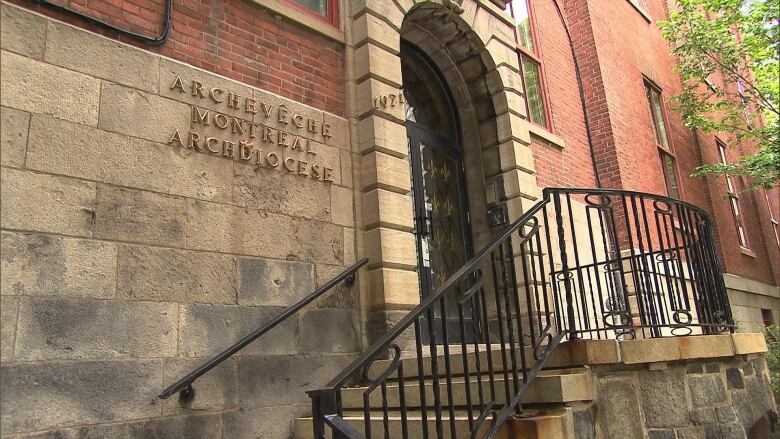 A.B. says it was clear his meeting with church officials at this Montreal archdiocese building was anything but ordinary: a group of clergymen gathered there listened, questioned and, at times, challenged the details he gave of the abuse he’d suffered at the hands of Rev. Brian Boucher. (Louis-Marie Philidor/CBC)

However, when he arrived at an archdiocese building that houses a priests’ residence and meeting rooms, tucked behind Mary Queen of the World Cathedral on René-Lévesque Boulevard, he was met by nine members of the clergy, some robed in their red and purple vestments.

He says he was grilled for hours, as some of the priests tried to poke holes in his story, looking for inconsistencies.

It felt to him like he was on trial.

“In the moment, you feel like you’re trying to win a war,” he said.

For almost two decades, A.B., now in his 30s, had kept secret his parish priest’s abuse that began when he was 10 years old.

He finally decided to open up after he was approached by Montreal’s auxiliary bishop and vicar general, Thomas Dowd, in the spring of 2016.

At the time, Dowd was looking into rumours that a child had been abused by Rev. Brian Boucher when the priest worked at St. John Brébeuf parish in Montreal’s LaSalle district.

Boucher was already under investigation. A year earlier, a former altar boy from a different parish, this one in the Town of Mount Royal, had gone to police with allegations he’d been abused by Boucher starting when he was 12. 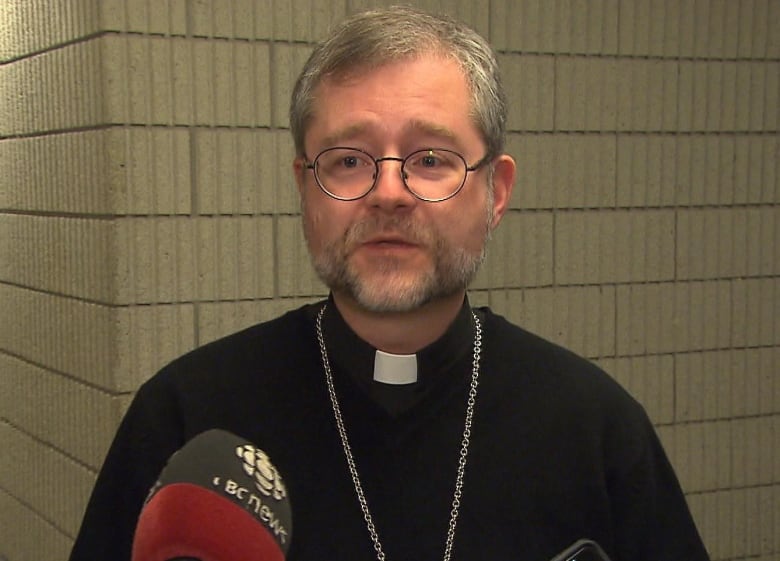 The auxiliary bishop and vicar general of the Montreal archdiocese, Thomas Dowd, contacted A.B. after he heard rumours Rev. Brian Boucher had abused a child at St. John Brébeuf parish in Montreal’s LaSalle district in the late 1990s. (CBC)

A.B. told Dowd that Boucher, an assistant pastor at the LaSalle parish in the late 1990s, had sexually assaulted him over a period of three years, until he was 13.

He says the effort of coming forward and talking about such a deeply painful experience was emotionally and physically crippling.

“It’s like all the oxygen in the room is gone,” he explained. “You can’t breathe. You can’t focus. You don’t know what to say.

“The only thing you feel is this emotion that doesn’t know how to control itself. It just kind of ends up everywhere. It comes from somewhere so deep inside — it’s so sore — you don’t know how to express it.”

A.B. was waiting for the police to complete their investigation, he recalled, when Dowd asked him to speak with some church officials in the fall of 2016.

At the time, he was still feeling raw from the pain of recounting, in detail, what he describes as the most “heartbreaking story” of his life.

He was stunned when he got to the building behind Montreal’s Roman Catholic cathedral where the meeting was to take place. It was, sadly, all too familiar.

“I was like, ‘This was literally where I was molested,'” A.B. recalled telling the auxiliary bishop, who’d arranged the meeting.

“You’d think they’d know,” A.B. said. “They know the years he was there and the years I was a victim.”

The victim, known by the initials A.B., said he’d hardly told anyone the ‘heartbreaking’ story of his abuse before he was summoned to a meeting of nine clergy at a Montreal archdiocese building in the fall of 2016. (CBC)

He was led into a room where he says nine clergymen were gathered. It quickly became clear to him this was no ordinary meeting.

Besides the police, A.B. had only recounted his entire story to one other person — Dowd, who had taken notes and recorded his testimony.

It appeared the other clergy had reviewed that material.

He says some appeared sympathetic, some were neutral, and some challenged his story.

Many questions zeroed in on perceived contradictions over certain dates or at what age the abuse happened, he said.

A.B. said he found it insulting that some of the priests seemed to cast doubt on the truthfulness of his account.

“For someone to question that, it brings out a level of stress and anxiety you don’t know how to deal with,” he said.

“I’ve never been more vulnerable in my life,” said A.B., who spent the entire meeting on the verge of tears. 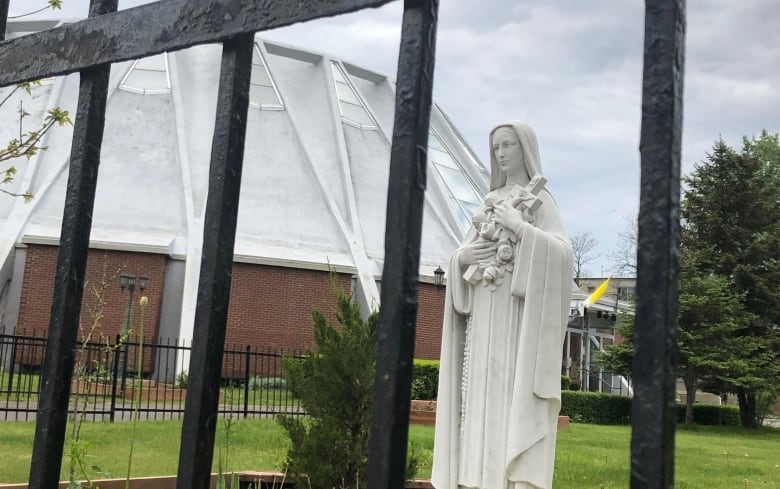 Rev. Brian Boucher was the assistant pastor at this parish, St. John Brébeuf in LaSalle, in the late 1990s. He sexually abused an altar boy there, from the age of 10 to 13. The victim, now in his 30s, is leading a class action lawsuit filed against the Roman Catholic Archdiocese of Montreal. (Louis-Marie Philidor/CBC)

A.B. said he was never told how the information would be used.

Although it was outside the judicial system, A.B. thought whatever he said there could be used in Boucher’s future trial. He had brought a friend along for support, but he did not have a lawyer present.

At the end of the meeting, which went on for several hours, the priests simply thanked him and shook his hand.

“Now, when I look at it, I don’t even know why I did it,” he said, reflecting on the ordeal. “I don’t know why I was there and why I put myself through that.”

On Jan. 8, 2019, Brian Boucher was found guilty of sexually assaulting the former altar boy from the Town of Mount Royal over a period of three years, between 2008 and 2011.

In March, the priest was sentenced to eight years in prison. 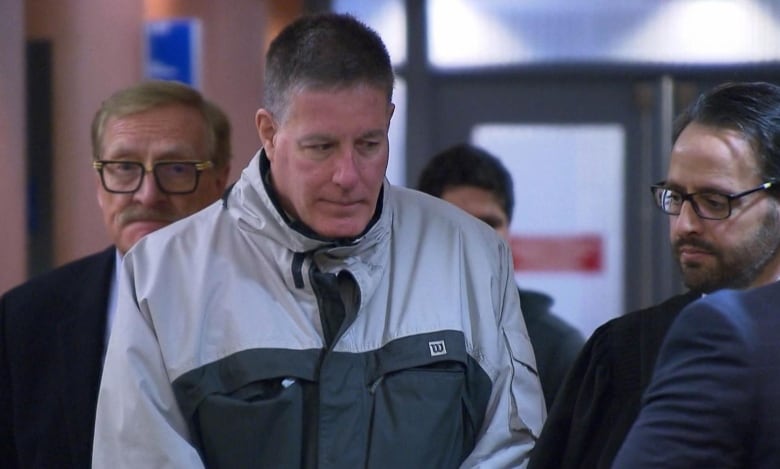 In March 2019, Boucher was sentenced to eight years in prison for the sexual abuse of two former altar boys when they were children. (CBC)

In April, shortly after Boucher’s sentencing, A.B. became the lead plaintiff in a class action lawsuit against the Roman Catholic Archdiocese of Montreal.

The suit, which is still awaiting judicial approval to proceed, is seeking compensation for anyone who may have been sexually assaulted by a Montreal priest or church staff member since 1940.

The court filing accuses the archdiocese of failing to protect children.

Virginie Dufresne-Lemire, whose law firm Arsenault Dufresne Wee filed the suit, says she was shocked to learn the archdiocese had arranged for the group of priests to interrogate A.B. about what had happened to him.

She says this kind of approach is risky.

“It would be enough for certain victims to decide not to talk anymore,” said Dufresne-Lemire. “It’s very traumatizing to have to tell your story.”

Not only were the priests who questioned him dressed like A.B.’s abuser, she said, but the victim had no lawyer present.

Given the trauma of reliving his abuse through that interrogation, she said, the archdiocese should have offered A.B. followup care with a psychologist or some other therapist, as the justice system offers victims who are called on to testify.

Dufresne-Lemire says while Boucher was not present at that meeting, the way A.B. was questioned made him feel as if he was the one on trial.

“The Church, the Vatican, they state publicly that they want to believe the victims and help them and be a part of the reconciliation — and they’re doing the contrary,” said Dufresne-Lemire.

‘Horrific attempt at getting information’

Thomas Doyle, a now-inactive American priest of the Dominican order who, in the 1980s, became one of the first in North America to expose sexual abuse by the clergy, said A.B.’s encounter with the archdiocese was not just inappropriate but counterproductive.

“It was a horrific attempt at getting information,” said Doyle, who has testified as an expert witness on behalf of hundreds of Catholic clergy abuse victims around the world. He said he’s never heard of anything like the interrogation A.B. endured. 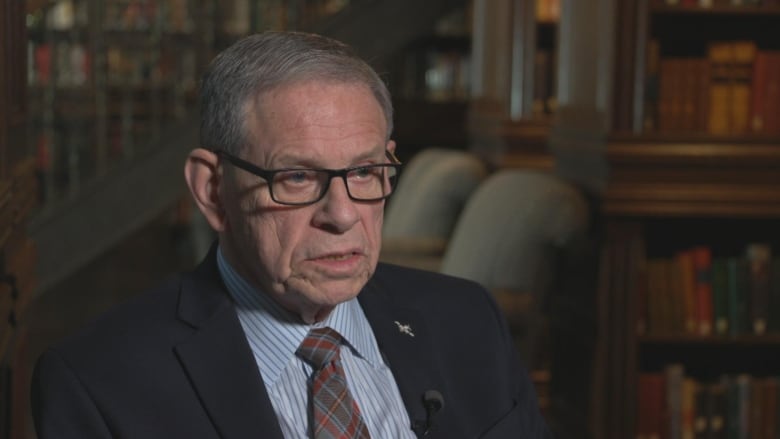 Thomas Doyle, an inactive American priest who has been called on as an expert witness in civil cases involving Catholic Church abuse victims worldwide, says the Montreal archdiocese should have left the investigation of the Boucher case to police and the courts. (CBC)

He believes the Church should leave investigations to the professionals — the police and the court system.

Nothing about A.B.’s experience sounds pastoral, compassionate or sympathetic, he said.

Doyle’s impression is that “their goal was to somehow or other intimidate the victim and perhaps try to convince him to back off or to discredit whatever his story might have been.”

The spokesperson for the Montreal archdiocese, Erika Jacinto, declined to comment on this story. Given the pending class action lawsuit, she said, the archdiocese “must respect the judiciary process now before the Superior Court of Quebec.”

None of the allegations in the suit against the archdiocese has been tested in court.

Jacinto confirmed to CBC/Radio-Canada that the archdiocese did do a “preliminary investigation” into Boucher’s abuse of A.B. and turned its findings over to police.

She also said an “administrative penal process” was held into Boucher’s conduct.

Jacinto did provide CBC/Radio-Canada with a link to the archdiocese’s protocol for handling allegations of abuse of a minor.

However, she would not answer any questions about the meeting A.B. was called to attend.

A.B. says he may never know the full extent of the damage Boucher caused him.

“I am a full-grown man now, but we’re talking about kids,” he said.

Leah Hendry is a TV, radio and online journalist with CBC Montreal Investigates. Contact her via our confidential tipline: 514-597-5155 or on email at leah.hendry@cbc.ca.