[Unofficial translation of French text below]

He is accused of sexual interference and sexual assault

Moncton-  An Ex-priest who is facing several charges of a sexual nature will be back in Court on the 24th of February.  Yvon Arsenault is accused of sexual interference, gross indecency and sexual assault.

A man in his 70ʼs and a native of Aldouane was expected in the Moncton Court on Monday to enter a plea and for election (method of trial). Instead, his lawyer appeared before Judge Troy Sweet to request an adjournment in order to more clearly understand the Crown’s case.

The prosecutor voiced no objection.

The alleged male victims were minors from south-eastern New Brunswick when the assaults would have taken place in the years during the 1970ʼs and 1980ʼs.

Arsenault was formally charged the 05 December 2013 without being arrested. The Shediac R.C.M.P. entered into this investigation after the complaints received in December of 2012.

Yvon Arsenault is also the subject of several civil lawsuits .The alleged victims claim they were sexually assaulted by the priest when they were young.They are also accusing the Moncton Archdiocese of not taking appropriate action against him. None of the allegations have been proven in Court.

In January of 2013 the archdiocese produce a press release indicating that Yvon Arsenault had been removed from ministry because of the allegations against him..

The alleged victims were subsequently invited to participate in the conciliation process headed by retired Supreme Court Judge, Michel Bastarache. The participants have received a monetary compensation and were required to sign a confidentiality agreement; as well they had to agree to refrain from taking civil action against the Church. 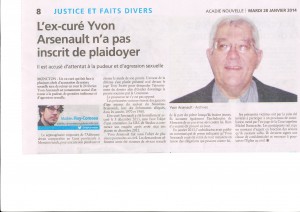