Yvon Arsenault, accused of abusing 4 boys, to return to court on Dec. 9 for preliminary inquiry

The case of a former New Brunswick Roman Catholic priest, who is facing eight sex abuse charges involving boys dating back to the 1970s, has been adjourned for three months. 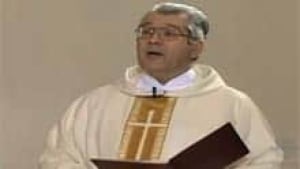 Yvon Arsenault, who was suspended by the Archdioces of Moncton in July 2012, is scheduled to have a preliminary inquiry on Dec. 9. (CBC)

​Yvon Arsenault, 71, of Aldouane, was scheduled to have a preliminary inquiry in Moncton court on Tuesday.

But the matter was set over until Dec. 9 at the request of his defence lawyer, who wanted all of the alleged victims to be present.

Arsenault did not appear in court.

He is charged with three counts of indecent assault, four counts of gross indecency and one count of sexual assault involving four boys under the age of 18.

The incidents are alleged to have occurred in Shediac, Rosaireville and Collette, N.B., in the 1970s and early 1980s.

The RCMP started an investigation in December 2012 as a result of a complaint.

Arsenault was removed from his position by the Archdiocese in Moncton in July 2012 and retired the same month.

He was charged in December 2013 and elected earlier this year to be tried by judge and jury.