Cardinal George Pell is going to trial.  According to media reports, he will face multiple charges from multiple complainants.  Some of the more serious charges have been dropped,  but those were charges which were based on allegations from one complainant who died recently, and another complainant who is medically unfit to testify.  Here is the news as it comes from the courtcase, followed by a report from CNN.  The Guardian reports are as it happens and, at this time,  the most up-to-date:

Pell to stand trial after significant day in court

It’s been a critical day in the Pell case. He was committed to stand trial in the county court on multiple charges involving multiple complainants, but also managed to have many other allegations, including the most serious, thrown out.

Pell for the first time entered formal pleas of not guilty to the remaining charges.

My colleague Melissa Davey has written a more comprehensive report on today’s judgment. She will continue to follow the case as it progresses towards a trial.

What next? We’re still a while away from a trial. But Pell will go to the county court for the first time tomorrow for a directions hearing on the remaining charges. Directions hearings are generally administrative in nature.

We’re going to wind down the live blog for now.

Thanks for sticking with me, and for your patience as we navigated the legal complexities of live reporting on the committal.

Cardinal George Pell leaves @MagCourtVic committed to stand trial on charges of historical sex offences. He will return to the County Court tomorrow for a directions hearing @9NewsAUS 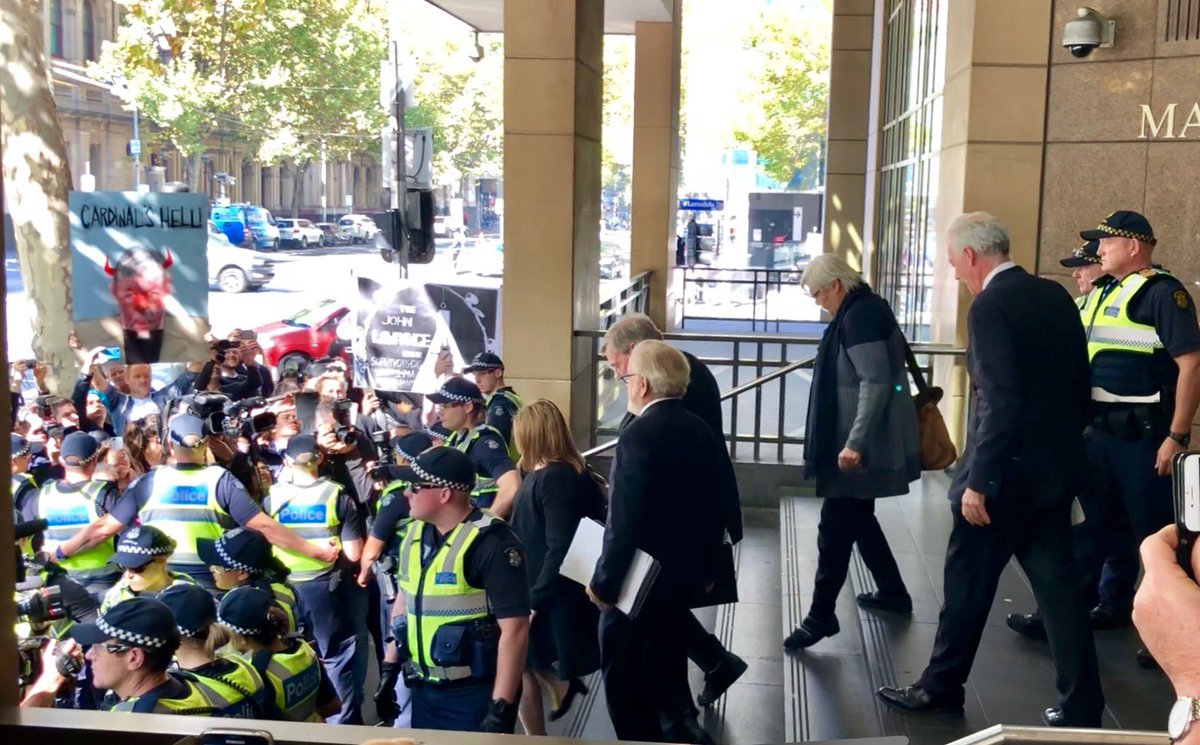 Cardinal George Pell has left the Melbourne magistrates court following his committal. He was flanked by his lawyer, Robert Richter, QC, and police.

Protesters shouted at Pell as he was escorted away. One yelled “hip, hip, hooray”.

There #Pell goes. It’s over – for now. @knausc My story will be up on @GuardianAus in a bit.

They are all still waiting for Pell to emerge from the court. We can expect more chaotic scenes when he does.

A woman is now screaming outside of the court “NO MORE SILENCE”. #Pell

While we take a breath, it’s worth re-reading this summary of the four-week committal hearing. Much of the evidence was heard in closed court, preventing media access, but the parts that were open were illuminating. Melissa Davey writes:

Pell sat each day in courtroom 22 on level five of Melbourne magistrates court in the same seat, head bowed, sometimes taking notes, always dressed in the same outfit; black pants, black shirt and a beige jacket. His friend and director of communications for the Archdiocese of Sydney, Katrina Lee, sat in the court with him most days, one row behind him, one seat to his left. Occasionally, Pell looked up at the witnesses. Apart from being softly asked the occasional question by Richter – who is a progressive atheist – or accepting well wishes from supporters before court began each day, Pell was largely silent.

Pell very clearly stated he will plead “not guilty” to those charges he will stand trial on. Half of the charges have been thrown out including the most serious charges (the nature of which I can not report for legal reasons).

The committal hearing is now closed and court attendees broke into applause once Magistrate Belinda Wallington dismissed the court. He has been committed on multiple charges. More than half were thrown out.

The trial will first be heard on 2 May at 9am for a first directions hearing, which is purely to go over administrative matters. His plea has been entered as not guilty. The trial will go for many months.

Pell’s bail is being set and the court has heard he has agreed he will not leave the country. But Richter told Wallington “there may be an overseas visitor who comes and arrives who the cardinal may see”.

Robert Richter, QC, has told the court he wants it known that the most serious charges against Pell have been thrown out.

He has also indicated he may push for separate trials against Pell, given the nature of the remaining charges.

Wallington has now finished delivering her judgment. A large number of charges have been thrown out, including the most serious.

But roughly a third of the charges against Pell will proceed to trial. He today pleaded not guilty to all of the remaining allegations.

That’s the first time Pell has formally entered pleas to the charges.

Pell again says he is ‘not guilty’

Pell has just been committed to face trial on another batch of charges.

The magistrate tells him he can plead not guilty or guilty at any point.

Pell tells the court he is not guilty

We’ve just received some vision of Pell arriving at court earlier. The cries of protesters are clearly audible as he makes his way into the court building, escorted by police.

As Wallington continues to deliver her decision, just a reminder that he complexities of this case make some details difficult to report.

Further description of the charges cannot be given for legal reasons.

But what we know so far is:

The Archdiocese of Melbourne has issued a short statement. It simply says:

The Archbishop of Melbourne Denis Hart has declined to make any comment in relation to the decision of the magistrate Belinda Wallington to commit Cardinal Pell to face trial in the county court.

Archbishop Hart expressed his confidence in the judicial system in Australia and said that justice must now take its course.

The magistrate is still delivering her decision.

But my colleague Melissa Davey says the magistrate has indicated that Pell will face trial on multiple charges, from separate complainants.

A number of charges against Pell have been withdrawn. We already knew that would occur.

We’ve also learned that Wallington has thrown out further charges relating to one complainant. She said it was impossible for the offences to have occurred given the complainant did not live at St Joseph’s boy’s home during the 12 month period when he said the alleged offences occurred.

Another charge against another complainant has also been thrown out.

Pell likely to stand trial on at least one charge

The court hears Pell is likely to stand trial on at least one charge. But many other charges have been thrown out. 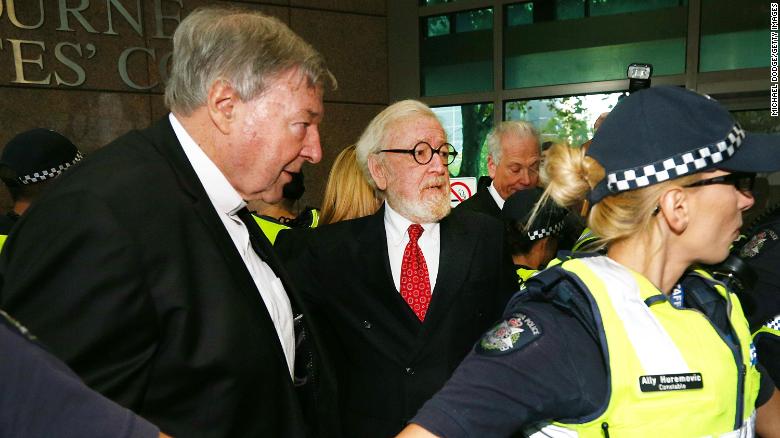 Cardinal George Pell (L) arrives with his lawyer at Melbourne Magistrates’ Court on May 1 in Melbourne, Australia.

While several of the more serious charges against Pell were dropped, Magistrate Belinda Wallington announced the cardinal would still be committed to trial.

The 76-year-old cardinal was facing multiple charges of historical sex assault offenses from a number of complainants. He has vigorously denied all charges.

The magistrate’s decision is still being read with the possibility of additional charges.

One of the country’s most senior Catholic figures, Pell arrived at Melbourne Magistrate’s Court early Tuesday, accompanied by his lead barrister, Robert Richter QC, as dozens of police sought to keep media and protesters at bay.

During a month-long committal hearing in March, dozens of witnesses including a number of accusers gave evidence against Pell.

Pell was charged last June and given leave by Pope Francis from the Vatican to contest the charges in his native country. He is the most senior figure in the Holy See to ever face criminal charges. 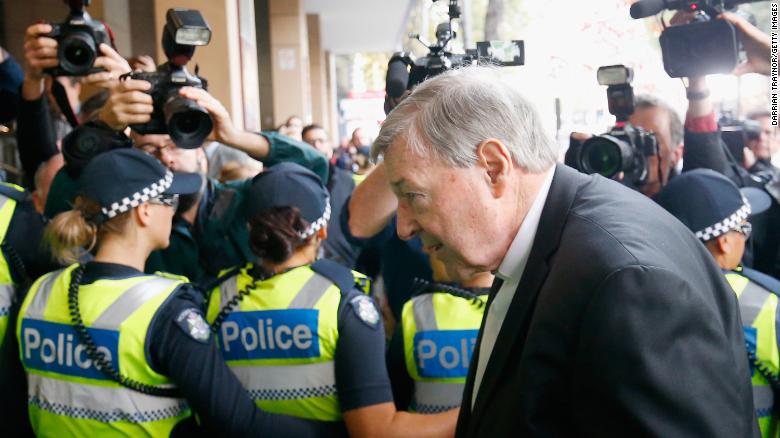 Police cordon off the media as Cardinal Pell walks into Melbourne Magistrates’ Court on May 1, 2018.

The cardinal has repeatedly denied the allegations against him. After the announcement of the charges was made in June 2017, he said the idea of sexual abuse was “abhorrent” to him.

The defense had argued strongly for the case to be dropped, saying it would be a “waste of public money, time and effort.” His attorney, Richter, said the allegations were an attempt to destroy the cardinal’s reputation.

When allegations of historic sexual abuse by Cardinal Pell first came to light in 2016 the Pope stressed that “we must avoid a media verdict based on gossip.”

Please keep the complainants and their families in your prayers.  Say a special prayer for the family of the deceased complainant, and for the complainant who is medically unfit to testify.