VATICAN CITY (Reuters) – A senior Vatican official who was transferred after he exposed a web of corruption begged to be allowed to continue his crusade and denounced a “vulgar and insolent” cleric behind a plot to destroy him, according to a leaked letter on Friday.

The letter from Archbishop Carlo Maria Vigano, who is now the Vatican’s ambassador to Washington, will increase consternation in the Vatican which has been put on the defensive by the growing scandal.

Vigano wrote on May 8, 2011, to Vatican Secretary of State Cardinal Tarcisio Bertone imploring “your eminence to radically change your opinion of me,” according to the letter published by the Italian daily Il Fatto Quotidiano, one of two news organizations which have been leaked the correspondence

Vigano wrote that letter nearly two months after Bertone, the second-most powerful man in the Vatican after the pope, informed him that he was being removed from his position three years before the scheduled end of his tenure.

Letters broadcast on Wednesday by the investigative program “The Untouchables” on the private television La7 showed Vigano was transferred against his will after complaining to Bertone and Pope Benedict about corruption and mismanagement.

The Vatican has not contested the authenticity of the letters, which sometimes read like a Renaissance drama of court intrigue, but has criticized the media’s handling of them.

As deputy governor of the Vatican City for two years from 2009 to 2011, Vigano was the number two official in a department responsible for maintaining the tiny city-state’s gardens, buildings, streets, museums and other infrastructure.

Vigano said in one of the earlier letters that when he took the job he discovered corruption, nepotism and cronyism linked to the awarding of contracts to outside companies at inflated prices.

In one letter, Vigano writes of a smear campaign against him

by other Vatican officials who were upset that he had taken drastic steps to clean up the purchasing procedures.

In the May 8, 2011, letter published on Friday Vigano, who has not yet commented on the letters, makes a desperate attempt to keep his job and salvage his reputation.

CONSPIRACY INSIDE THE VATICAN WALLS

He names two people, one a monsignor and one a layman, who he says were behind the plot to discredit him and behind anonymous stories criticizing him that were published in the Italian newspaper Il Giornale earlier that year.

In the May letter, Vigano pleads with Bertone to see “the plot to destroy me in the eyes of your eminence.”

He also accuses the monsignor of corruption and mismanagement in a previous Vatican post and says that if the Vatican does not discipline him “I will consider it my duty to go to the civil justice system.”

Vigano accuses the monsignor of being “vulgar in behavior and language and arrogant and insolent” to staff in the Vatican department where he worked.

He then names a third official, a layman, and accuses him of being responsible for “denigration and calumny against me.”

He appeals to the pope not to transfer him, even if it means promotion, because it “would be a defeat difficult for me to accept.” In October he was named ambassador to Washington after the sudden death of the previous envoy to the United States.

In another letter to the pope on April 4, 2011, Vigano says he discovered the management of some Vatican City investments was entrusted to two funds managed by a committee of Italian bankers “who looked after their own interests more than ours.”

Vigano said Vatican-employed maintenance workers were demoralized because “work was always given to the same companies at costs at least double compared to those charged outside the Vatican.”

VATICAN CITY – An Italian news program has obtained letters from a top Vatican official to the pope in which he begs not to be transferred after exposing corruption in the awarding of Vatican contracts that cost the Holy See millions of euros (dollars).

Archbishop Carlo Maria Vigano was removed in October as the No. 2 administrator of the Vatican city-state and was named the pope’s ambassador to Washington. While the job is highly prestigious, the posting took Vigano far from headquarters and out of the running for the Vatican’s top administrative job, which carries with it the rank of cardinal.

The investigative news program “The Untouchables” on the private La7 network broadcast a series of letters Vigano sent Pope Benedict XVI and the secretary of state last year in which he claimed to have exposed corruption and abuse of office in the running of the Vatican’s administration.

Vigano said he corrected them during his two years as secretary-general of the Vatican city-state, the Vatican department that is responsible for everything from maintaining the pope’s gardens to running the Vatican Museums.

But in the process of cutting costs, Vigano made enemies who he blamed for launching a smear campaign in the Italian media in 2011 calling for his removal that, he claimed, sealed his fate.

“Blessed Father, my transfer in this moment would provoke confusion and discouragement for those who thought it was possible to clean up so many situations of corruption and abuse of office” that for a long time have been rooted in the Vatican administration, Vigano wrote Benedict on March 27, 2011.

Seven months later he was named ambassador to Washington after the sudden death of the previous envoy following complications from surgery.

Vigano claimed that when he came into office in 2009 he discovered a small coterie of businesses held the vast majority of Vatican contracts and charged the Holy See twice the going rate for services, according to the letters shown on the La7 report.

He denounced the workings of an unofficial group of Italian bankers appointed after the global financial crisis to try to shore up the Vatican’s finances, charging that their management of two investment funds “resulted more in their own interests than ours.”

In one Dec. 9 transaction they lost the Vatican $2.5 million, the letter on La7 said.

An email seeking comment from Vigano at the Vatican’s embassy in Washington was not returned Wednesday. The Vatican spokesman said he had no immediate comment on the report.

Cardinal Velasio De Paolis, the recently retired head of the Vatican’s finance department, was asked by the show’s host if Vigano’s claims of corruption were well-founded.

“From what I know, I don’t think there was actual corruption,” De Paolis said. But he suggested that there may well have been “instances of a lack of correctness” that can happen anywhere.

Giovanni Maria Vian, the editor of the Vatican newspaper L’Osservatore Romano, insisted on the show that Vigano’s transfer to Washington wasn’t a punishment for exposing wrongdoing or stepping on too many toes. He noted that Vigano had been in the Vatican’s diplomatic service for years and said he was being promoted to the Holy See’s most important overseas post.

“He wasn’t sent away. He was made the pope’s representative in Washington!” Vian said.

The show was hosted by Gianlugi Nuzzi, author of Vatican SpA, a 2009 book outlining the shady dealings of the Vatican bank that was based on a trove of leaked Vatican documents. 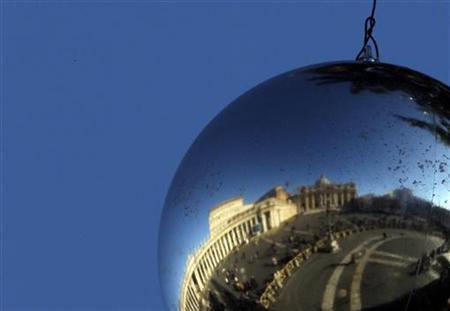 (Reuters) – The Vatican was shaken by a corruption scandal on Thursday after an Italian television investigation said a former top official had been transferred against his will after complaining about irregularities in awarding contracts.

The show “The Untouchables” on the respected private television network La 7 on Wednesday night showed what it said were several letters that Archbishop Carlo Maria Vigano, who was then deputy-governor of Vatican City, sent to superiors, including Pope Benedict, in 2011 about the corruption.

The Vatican issued a statement on Thursday criticising the “methods” used in the journalistic investigation. But it confirmed that the letters were authentic by expressing “sadness over the publication of reserved documents”.

As deputy governor of the Vatican City for two years from 2009 to 2011, Vigano was the number two official in a department responsible for maintaining the tiny city-state’s gardens, buildings, streets, museums and other infrastructure.

Vigano, currently the Vatican’s ambassador in Washington, said in the letters that when he took the job in 2009 he discovered a web of corruption, nepotism and cronyism linked to the awarding of contracts to outside companies at inflated prices.

In one letter, Vigano tells the pope of a smear campaign against him (Vigano) by other Vatican officials who wanted him transferred because they were upset that he had taken drastic steps to save the Vatican money by cleaning up its procedures.

“Holy Father, my transfer right now would provoke much disorientation and discouragement in those who have believed it was possible to clean up so many situations of corruption and abuse of power that have been rooted in the management of so many departments,” Vigano wrote to the pope on March 27, 2011.

In another letter to the pope on April 4, 2011, Vigano says he discovered the management of some Vatican City investments was entrusted to two funds managed by a committee of Italian bankers “who looked after their own interests more than ours”.

Vigano says in the same letter that in one single financial transaction in December, 2009, “they made us lose two and a half million dollars”.

The programme interviewed a man it identified as a member of the bankers’ committee who said Vigano had developed a reputation as a “ballbreaker” among companies that had contracts with the Vatican, because of his insistence on transparency and competition.

The man’s face was blurred on the transmission and his voice was distorted in order to conceal his identity.

In one of the letters to the pope, Vigano said Vatican-employed maintenance workers were demoralised because “work was always given to the same companies at costs at least double compared to those charged outside the Vatican”.

For example, when Vigano discovered that the cost of the Vatican’s larger than life nativity scene in St Peter’s Square was 550,000 euros in 2009, he chopped 200,000 euros off the cost for the next Christmas, the programme said.

Even though, Vigano’s cost-cutting and transparency campaign helped turned Vatican City’s budget from deficit to surplus during his tenure, in 2011 unsigned articles criticising him as inefficient appeared in the Italian newspaper Il Giornale.

On March 22, 2011, Vatican Secretary of State Cardinal Tarcisio Bertone informed Vigano that he was being removed from his position, even though it was to have lasted until 2014.

Five days later he wrote to Bertone complaining that he was left “dumbfounded” by the ouster and because Bertone’s motives for his removal were identical to those published in an anonymous article published against him in Il Giornale that month.

In early April, Vigano went over Bertone’s head again and wrote directly to the pope, telling him that he had worked hard to “eliminate corruption, private interests and dysfunction that are widespread in various departments”.

He also tells the pope in the same letter that “no-one should be surprised about the press campaign against me” because he tried to root out corruption and had made enemies.

Despite his appeals to the pope that a transfer, even if it meant a promotion, “would be a defeat difficult for me to accept”, Vigano was named ambassador to Washington in October of last year after the sudden death of the previous envoy to the United States.

In its statement, the Vatican said the journalistic investigation had treated complicated subjects in a “partial and banal way” and could take steps to defend the “honour of morally upright people” who loyally serve the Church.

The statement said that today’s administration was a continuation of the “correct and transparent management that inspired Monsignor Vigano”.