Prelates who do not comply with child protection norms adopted by their bishops’ conferences and approved by the Vatican must face real consequences, Cardinal Seán O’Malley has said.

The president of the Pontifical Commission for the Protection of Minors said the commission “is very, very concerned about this whole area of [bishops’] accountability” and has a working group drawing up recommendations for Pope Francis.

The proposed new norms, the cardinal told reporters at the Vatican on February 7, “would allow the Church to respond in an expeditious way when a bishop has not fulfilled his obligations”.

“We think we have come up with some very practical recommendations that would help to remedy the situation that is such a source of anxiety to everybody” on the pontifical commission, he said. The recommendations will be presented to Pope Francis.

The cardinal and members of the commission, which includes survivors of clerical sex abuse, spoke to reporters at the end of their February 6-7 meeting at the Vatican.

Peter Saunders, an abuse survivor and commission member, said: “Bishop accountability is most definitely something that is a concern and central to some of the work that is going to be carried out by the commission.”

Mr Saunders, who is from London, said he knows the Vatican and the Church at large “operate in a slightly different time dimension” where the definition of “quick” may be months or years. “I get that,” Saunders said, “but when it comes to time, children only get one stab at childhood.”

Fr Hans Zollner, a Jesuit psychologist and member of the commission, said, “as far as we know”, the number of bishops who have not followed their conference’s child-protection norms is not large, “but it is certainly a huge problem in terms of publicity and in terms of the authenticity of the Church. If you have bishops who do not comply with the Church’s own norms, we have a problem.”

Currently, he said, even though bishops are part of a bishops’ conference, they are accountable only to the Pope and there is no procedure for investigating the way a bishop complies with the norms and nothing that spells out the consequences of non-compliance.

“Until now every bishop has been a little pope” in his diocese and “can do whatever he wants” with regard to national guidelines, Fr Zollner said. “Only the Pope has authority over him.”

Mr Saunders told reporters that if in the next year there is not “firm action” on accountability and the implementation of child protection policies around the world, he would leave the commission.

Marie Collins, an Irish survivor of clerical abuse, who was appointed to the commission about eight months before Saunders, told reporters she also would leave if no progress is seen soon.

“We’re not here for lip service,” Mr Saunders said, but to protect children.

Cardinal O’Malley said 96 per cent of the world’s bishops’ conferences have sent the Vatican their child-protection norms, as requested in 2011 by the Congregation for the Doctrine of the Faith.

Some of the norms are “weak”, he said, and the commission will work with those countries and countries without norms to bring them to full compliance.

Fr Zollner said only five of the world’s 112 bishops’ conferences have not submitted norms. All five are in French-speaking West Africa and are facing the challenges of civil strife, the Ebola epidemic, poverty and a lack of people familiar with both canon and civil law, something necessary for drawing up effective guidelines.

Cardinal O’Malley publicly thanked Pope Francis for a letter, released on February 5, insisting that the protection of children – and not the avoidance of scandal or bad publicity – must be the priority for the way all bishops deal with accusations of sex abuse by Church personnel.

The Pope’s letter also encouraged bishops to meet with and listen to survivors, which is something Cardinal O’Malley said “many bishops have not yet done”.

Mr Saunders told reporters: “There are far too many bishops around the world who have refused to meet with survivors.”

If a victim of clerical sexual abuse feels able, he said, the first thing he or she should do is report the crime to police “because we know there is an abysmal record” of “ill-judged responses” from bishops and priests.

Cardinal O’Malley said the commission also has set up working groups to design child protection workshops for members of the Roman Curia and for the courses for newly appointed bishops that the Vatican runs each September.

“The commission is also preparing materials for a Day of Prayer for all those who have been harmed by sexual abuse,” he said, which “underscores our responsibility to work for spiritual healing and also helps raise consciousness among the Catholic community about the scourge of child abuse.”

In addition, he said, commission members are contacting Catholic funding organisations “to ask them to include some requirements concerning child protection in their guidelines for eligibility for funding” and to consider giving poorer countries grants to establish child protection.

Members of Pope Francis’s newly established sex abuse commission yesterday sharply criticised his remarks that it is appropriate for parents to spank their children, saying: “You don’t hit kids.”

The 17-member Vatican commission, which was meeting for the first time, announced that it would be making recommendations to the papacy on protecting children from corporal punishment as a result of his remarks.

Peter Saunders, a commission member who was sexually abused by a Catholic priest as a teenager, said the Pope should revise his comments, given that “millions of children around the world are physically beaten every day”.

“It might start off as a light tap, but actually the whole idea about hitting children is about inflicting pain,” Mr Saunders told a press conference.

“That’s what it’s about and there is no place in this day and age for having physical punishment, for inflicting pain, in terms of how you discipline your children.”

Another commission member, Dr Krysten Winter-Green, a New Zealand native now working in the United States with abused young people, said there was no type of corporal punishment for children that was acceptable. “There has to be positive parenting, in a different way,” she said.

The commission also announced progress on drafting policies for holding bishops accountable when they cover up for paedophile priests. It has been tasked with organising educational seminars for Vatican officials and newly minted bishops about protecting children from predators.

But commission members got an unexpected and urgent new responsibility when Pope Francis said at his general audience this week that it was OK for parents to spank their children if their dignity was respected.

“One time, I heard a father say, ‘I sometimes have to smack my children a bit, but never in the face so as to not humiliate them,’” the Pope said. “How beautiful!”

He added: “He knows the sense of dignity! He has to punish them, but does it justly and moves on.” In December 2013, Pope Francis announced his intention to set up a commission for the Protection of Minors, which was formally established last March. The 17-member commission, headed by Cardinal Sean O’Malley of Boston, is winding down its first plenary meeting, which took place in Rome from Feb. 6-8.

One of the key points in the commission’s agenda has been the question of bishop accountability, and what sort of sanctions should be imposed on bishops suspected of cover-ups or of failing to prevent abuse.

Last November, O’Malley wrote a column that was posted on the website of the archdiocesan newspaper. “We are all aware that Catholics want their leaders to be held accountable for the safety of children, but the accountability has been sporadic,” he said. “We need clear protocols that will replace the improvisation and inertia that has often been the response in these matters.”

In a press conference on Saturday, O’Malley said that the commission has proposed new norms that “would allow the Church to respond in an expeditious way when a bishop has not fulfilled his obligations.”

“We think we have come up with some very practical recommendations that would help to remedy the situation that is such a source of anxiety to everybody,” he said.

According to Peter Saunders, a member of the commission who was abused by priests as an adolescent, “Bishop’s accountability is most definitely something that is of concern and central to some of the work that is going to be carried out by commission.”

Both Saunders and another member of the group, Marie Collins of Ireland, said they would resign unless something was done to make bishops accountable.

BishopAccountability.org, an American association that monitors sexual abuse in the Church, urged the commission to recommend “tough and unambiguous” measures.

Pope Francis sent a letter Thursday to all presidents of bishop’s conferences and religious superiors, asking for their full cooperation with the Vatican commission.

In the letter, Pope Francis told bishops that families “need to know that the Church is making every effort to protect their children.” He also underscored that “priority must not be given to any other kind of concern, whatever its nature, such as the desire to avoid scandal, since there is absolutely no place in ministry for those who abuse minors.”

Cardinal O’Malley expressed his gratitude for the Pope’s letter, which, he said, was a suggestion the commission had made some time ago. 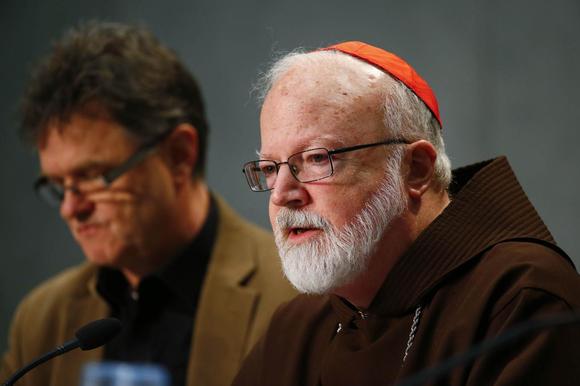 Cardinal Sean Patrick O’Malley, a member of a commission tackling sexual abuse, holds a news conference at the Vatican, February 7, 2015.

(Reuters) – A commission advising Pope Francis on how to root out sexual abuse of children by clergy in the Catholic Church is studying sanctions for bishops suspected of cover-ups or of failing to prevent abuse, members said on Saturday.

“There have to be consequences,” Cardinal Sean O’Malley of Boston, the head of the commission, told a news conference.

Victims groups have been urging the Vatican for years to make bishops more accountable for abuse in their dioceses even if they were not directly responsible for it.

O’Malley said the commission, holding its first full meeting since it was established last year, was drafting recommendations for the pope on how to make bishops more accountable, including possible sanctions.

“We think we have come up with some practical recommendations,” he said, without giving details but adding that they would “hopefully be implemented”. Under current Church law only the pope can dismiss a bishop.

On Thursday, Francis ordered bishops the world over to cooperate as a matter of priority with the commission to root out “the scourge” of the sexual abuse even if it unearths new scandals.

Both he and another member, Marie Collins of Ireland, said they would resign unless something was done to make bishops accountable.

However, Survivors Network of those Abused by Priests (SNAP), which has long campaigned for bishops to be held accountable, called O’Malley’s comments “insulting and deceptive” to victims and demanded immediate action.

“O’Malley knows that the Church has plenty of ways, right now, to respond when bishops are complicit in clergy sex crimes and cover ups. The Pope can oust them,” the U.S.-based group said in a statement.

BishopAccountability.org, a American documentation service on sexual abuse in the Church, called on the commission to recommend “tough and unambiguous” measures.

Part of the task of the commission, which is made up of 17 clerics and lay people from around the world, is to help dioceses put in place “best practices” to prevent abuse and work with victims in a process of healing. Eight members are women.

The worldwide scandal, which first became prominent in Boston in 2001, has seen known abusers shunted from parish to parish instead of being defrocked and handed over to authorities.