By Manya A. Brachear | Tribune reporter

The college of cardinals will get off to a late start Monday when they assemble for the first time to prepare for the next conclave, Chicago’s Cardinal Francis George told reporters today.

George had expected the meetings to begin the day after Pope Benedict XVI officially resigned. But the memo summoning the College of Cardinals arrived from the Dean of the College by fax only this morning.

The summons includes two formal assemblies called general congregations on Monday — a break from the norm of formal meetings in the morning and smaller more informal gatherings in the afternoon.

The summons did not set a date for the conclave.

Only the cardinals can do that after they’ve had a chance to meet and determine whether they’re ready, George said.

“You have to get into that discussion and have a sense of security at a certain point that says we’re ready,” he said. “You begin rather tentatively and then you start to fill things in both about the mission and about people.”

Recalling the last conclave in 2005 that elected Pope Benedict XVI, “I remember thinking to myself ‘I’m ready to go into conclave now,'” George said.

George emphasized the importance of hearing input from retired cardinals who turned 80 before Thursday. They can participate in the general congregations but are not allowed to vote in the conclave.

“They want to have time to tell us what they think,” said George, who said he heard and took seriously the pleas of the retired cardinal of Barcelona Thursday. “There’s a lot of wisdom there and this is the only occasion they have to influence the voting. You’ve got to respect their situation and give them time to talk.” 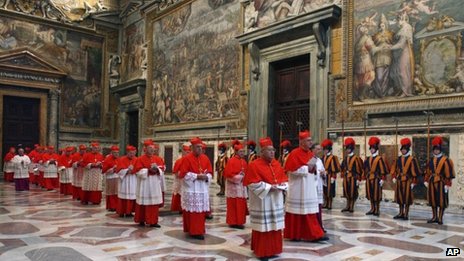 When you go into the Conclave it’s very strange: you’re cut off, you can’t bring a telephone and you are guarded.

During those days you have secret meetings with other cardinals to discuss names of possible Popes – what challenges there are for the Church and who might be most suitable to face them.

So it was in that way I came to a conclusion as to who I’d vote for – at least in the beginning.

Without giving anything away, I can say certainly there were Third World, Latin American concerns – not so much candidates but concerns – regarding poverty, and the Church on the side of the poor.

These were very much on a lot of the cardinals’ minds.

The most momentous bit was processing into the Sistine Chapel, which is quite dramatic with all the cardinals dressed in scarlet.

Someone says “Extra omnes” – which means “Everyone out” – leaving just the cardinal-electors before the door closes with a thud.

I remember looking around at all of the other 114 cardinals and thinking: “One of us will be going out with a white cassock on.”

Three cardinals are elected to be scrutineers and one by one we’d go up with our voting slip and place it in a golden urn. 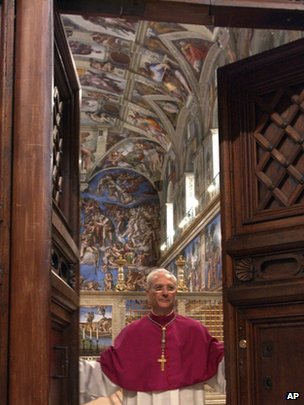 And that’s a solemn moment, as above you is Michelangelo’s Last Judgement.

The votes are read out by the scrutineers after they’ve examined them.

When the majority was reached, after 77 or 78 votes, there was sort of a gasp all around, and then everyone clapped.

Cardinal Ratzinger had his head down. I think he must have said a prayer.

The senior cardinal went up to him and said: “Do you accept?”

So we all waited with bated breath.

I remember that moment very well and the silence that reigned. He looked very solemn, and not only lucid, but also calm. 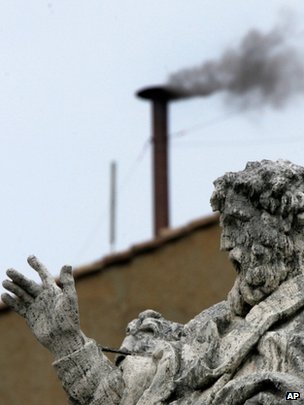 When he was asked what he’d call himself, he said Benedict – he must have thought about it beforehand. I think every cardinal had a name up his sleeve.

(I had two or three in mind, like Adrian, the only English Pope, or Gregory who sent Augustine to the UK – or, in fact, Benedict.)

Then he went out and there was a papal tailor outside with three white cassocks – large, medium or small.

After 10 minutes or so, Benedict came back in to the middle of the room and we all went up and kissed his ring.

And it doesn’t matter how you voted – he’s the Pope.

After the conclave, Benedict said, “I’d like you all to stay for dinner and we’ll have a convivial dinner together.”

And indeed we did… and in he comes, all dressed up. I often wondered what he felt, really. So anyway, we gave him a great clap, we had a very pleasant dinner with some champagne to drink a toast.

Then we tried some songs. It was very difficult when you have about 100 different languages to get one song… and then he went to rest.

Last conclave, the voting was over quickly. This one might take a bit more time.

Cardinal Cormac Murphy-O’Connor is the archbishop emeritus of Westminster. He voted in the conclave that elected Benedict XVI as Pope in 2005 but, as he turned 80 last August, he will be too old to vote for Benedict XVI’s successor.

Conservative thinkers dominate those who vote for Pope

Not many liberals in current College of Cardinals

David Perlich is in Rome to provide analysis of the election of the next pope for CBC News. Perlich has previously worked for Al-Jazeera in Washington D.C., and was the managing editor of the Belgian daily newspaper De Morgen. He also spent 10 years with CBC News in Calgary. He has a Master’s degree in Journalism from Columbia University, where his thesis was on the Holy See and media transparency. Perlich covered the last papal conclave, in 2005, for CBC News. It’s unlike any election you’ve ever heard of.

A conclave has no official candidates. There are no parties, no party platforms, no manifestos, no pledges, not even any stump speeches or slogans.

There are also no factory tours, baby kissing, robo-calls and certainly no banners or bunting.

Nevertheless, it is an election. And all elections cause division and consternation. But speaking of “factions” within the Cardinals of the Catholic Church has lost much of its meaning.

The College of Cardinals for the upcoming conclave will be composed of 115 electors (as of this writing).

That’s 115 men from diverse parts of the world, with their own nuanced values, and their own concepts of spiritual and temporal leadership of the Roman Catholic Church.

Between them, the last two popes appointed every cardinal who will vote in the conclave.

As both popes could reasonably be described as doctrinal conservatives, it means a certain form of orthodoxy, some might say rigidity, exists amongst those who will soon cast their ballots into the golden urn.

In previous conclaves, it was possible to describe factions, even voting blocs, within the College of Cardinals.

These divisions usually revolved around the implementation or interpretation of the reforms of Vatican II, the gathering of the world’s bishops in Rome in the mid-1960s that discussed the role of the Church in the modern world and led to changes such as the end of the Latin mass. Pope Benedict blesses the faithful for the last time on Thursday, from the balcony of his summer residence in Castel Gandolfo. (Tony Gentile / Reuters)

Sometimes, those divisions were relatively apparent, even if only quietly discussed over late-night dinners in darkened restaurants along the quiet side streets near the Vatican.

In the early- and mid-twentieth century, a split emerged between the so-called progressives and conservatives, even if knowledge of it came only after the fact, and in the form of well-founded rumour.

But those times have, for the most part, passed. The spectrum has shrunk.

Long gone are the days when cardinals could be described as being deeply divided over issues like “modernity,” “democracy” or “the Latin Mass.”

Long piled onto the dustbin of history are divisions such as French cardinals against Italian, or when Austrian archdukes attempted to veto specific candidates who were too “pro-Slav.” This time, it looks like most everyone is on the same playing field, and there are few obvious divisions.

At best, it is possible to describe some cardinals as more moderate, and some as more conservative, which, compared to the divisions of yesteryear, looks rather like shades of beige.

With the death of the highly respected Jesuit Cardinal Carlo Maria Martini in 2012, the “great voice” of the more Progressive wing of the church was silenced.

If one puts any credence into reports that have widely circulated in the Italian press (which quote an anonymous cardinal’s diary), Martini actually gave Cardinal Josef Ratzinger — who became Pope Benedict XVI — a serious run for his money in the early voting during the last conclave.

Martini was a candidate with reform ideals that many others could get behind.

Eight years later, those divisions seem to have passed.

Rather than opposing value sets, the nuance between conservatives and moderates within the Catholic Church is more likely found in what a particular cardinal thinks the Church should be focusing on.

In the broadest of terms, moderates may want the focus more on social justice issues, especially economic social justice and a greater role for the laity.

Conservatives may be more concerned with maintaining traditional values, and the Church’s stance on issues such as marriage and abortion.

Many of the cardinals are undoubtedly dynamic, extraordinarily articulate and deeply reasoned men. Some have highly developed thoughts on the future of the Church around the world.

But given the complexity of geographic, linguistic and experiential differences amongst those within the College of Cardinals, no singular visions appear to have come to the fore.

There is an old Roman expression: “Those who know do not speak. Those who speak do not know.”

And that’s what makes trying to understand the nuanced undercurrents of any division within the current College of Cardinals miserably difficult to parse. The pope has gone. Cardinal Tarcisio Bertone seals the door of the apartment of Pope Benedict XVI at the Vatican on Thursday. (Osservatore Romano / Reuters)

This is in no small measure because there are no serious knockout candidates.

The upcoming conclave has its “papabili” — those cardinals who are realistic candidates — but unlike Ratzinger or Martini in 2005, there are no big, obvious, divisive personalities to rally behind.

There may also be no candidates who offer truly diverse visions for the way ahead.

That is not to say there are not some highly controversial points on which cardinals disagree.

Certainly the recent statement by British Cardinal Keith O’Brien that priests should be allowed to marry was the Vatican’s version of a “shocker story.”

So was the very public dispute between Cardinal Christoph Schönborn (Austria) and Cardinal Angelo Sodano (Italy) over the particular handing of a particular sexual abuse case, which required an intervention from the pope himself.

But such public events make news because they are highly unusual.

Many in the Church would likely praise the uniformity of vision within the College of Cardinals, describing it as a sign of consensus and agreement, even tranquility of vision.

Still, during the speeches and discussions the cardinals will have in the General Congregation before the conclave begins, there is always the possibility that someone will step up and wow everyone with his particular vision for the future of the Church.

That could create something for a true faction to form around.