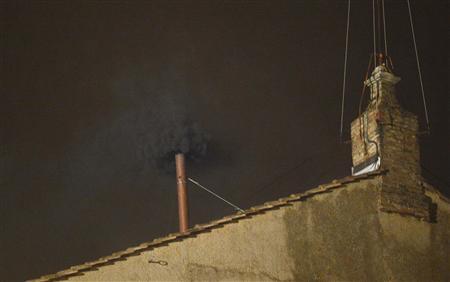 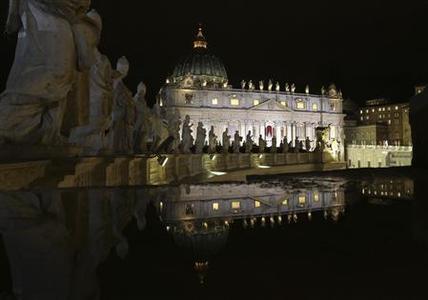 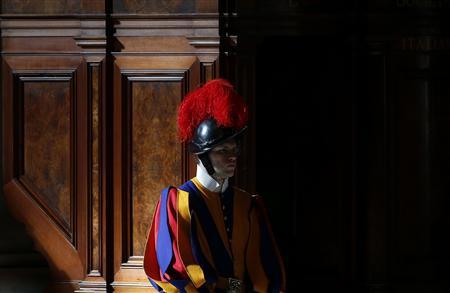 By Crispian Balmer and Philip Pullella

(Reuters) – Thick black smoke billowed from the Sistine Chapel’s chimney on Tuesday, signaling an inconclusive first vote in the conclave to elect a new pope at a time of strife and scandal for the Roman Catholic Church.

Thousands of faithful huddled in St. Peter’s Square to watch the smoke pour out of the narrow flue in the rain-laden gloom following a day rich in ritual and pageantry.

Earlier, after praying for divine guidance, the red-hatted cardinals took a solemn vow in Latin never to divulge any details of their deliberations. They then secluded themselves behind the chapel’s heavy wooden doors.

No conclave in the modern era has chosen a pope on its first day, and some cardinals speculated this week that it might take four or five days to pick the man to replace Pope Benedict, 85, who unexpectedly abdicated last month.

The so-called “Princes of the Church” will spend the night in a Vatican hotel before returning to the frescoed Sistine Chapel at 9:30 a.m. (0830 GMT) on Wednesday to continue voting, with two rounds set for the morning and two for the afternoon.

Until they choose a new pontiff, their only communication with the outside world will be the smoke from the Chapel chimney – black when voting sessions end with no result and white when a pontiff is elected.

The crowd’s excited cheers when the first puffs of smoke emerged swiftly turned to disappointed sighs when they saw that it was signaling no surprise early decision.

“I am on vacation and can’t believe how lucky I am to be here at this moment,” said Patricia Purdy, a retired teacher from New York, adding it was time for a younger pope.

“It would be good if he was young, so he can relate to younger people and bring them closer to the Church.”

Whoever becomes the 266th pontiff in the Church’s 2,000-year history will face a daunting array of problems, including sex abuse scandals, infighting within the Vatican bureaucracy and the spread of secularism in its European heartland and beyond.

No clear-cut front runner has emerged, with some prelates pushing for a strong manager to control the much criticized central administration, known as the Curia, while others want a powerful pastor to promote their faith across the globe.

Italy’s Angelo Scola and Brazil’s Odilo Scherer are spoken of as strong contenders. The former would return the papacy to Italy after 35 years in the hands of Poland’s John Paul II and the German Benedict XVI. Scherer would be the first non-European pope since Syrian-born Gregory III in the 8th century.

However, a host of other candidates have also been mentioned as “papabili” – potential popes – including U.S. cardinals Timothy Dolan and Sean O’Malley, Canada’s Marc Ouellet and Argentina’s Leonardo Sandri.

Latin chants accompanied the cardinals as they processed into the Sistine Chapel, with Michelangelo’s depiction of Christ delivering the Last Judgment on the back wall and his image of the hand of God giving life to Adam on the ceiling.

The doors were shut at 5.34 p.m. (1634 GMT) after the master of ceremonies, Guido Marini, said “Extra Omnes” (Latin for “Everyone Out”), asking all those not associated with the gathering to leave the room.

Maltese Cardinal Prosper Grech, who at 87 is too old to participate in the voting, remained inside to give a sermon to remind the 115 cardinal electors of the gravity of their responsibility.

Earlier, at a pre-conclave Mass in St. Peter’s Basilica, Italian cardinal Angelo Sodano called for unity in the Church and urged his brother cardinals to support the future pope.

“My brothers, let us pray that the Lord will grant us a pontiff who will embrace this noble mission with a generous heart,” he said in his homily.

There are constant reminders of the scandals and controversies facing the Church.

In the past month, the only British cardinal elector recused himself from the conclave and apologized for sexual misconduct.

Police detained two women who staged a brief topless protest against the Church before the massed ranks of television crews who have come from around the world to follow the conclave.

All the prelates in the Sistine Chapel were appointed by either Benedict XVI or John Paul II, and the next pontiff will almost certainly pursue their fierce defense of traditional moral teachings.

But Benedict and John Paul were criticized for failing to reform the Curia, and some churchmen believe the next pope must be a good chief executive or at least put a robust management team in place under him.

Vatican insiders say Scola, who has managed two big Italian dioceses without being part of the Vatican’s central administration, could be well placed to understand its Byzantine politics and introduce swift reform.

The still-influential Curia is said by the same insiders to back Scherer, who worked in the Vatican’s Congregation for Bishops for seven years before leading the Sao Paolo diocese – the largest in Brazil, the country with the most Catholics.

With only 24 percent of Catholics living in Europe, pressure is growing to choose a pontiff from elsewhere in the world who would bring a different perspective.

Latin American cardinals might worry more about poverty and the rise of evangelical churches than questions of materialism and sexual abuse that dominate in the West, while the growth of Islam is a major concern for the Church in Africa and Asia. Vatican City: The famous smoke from a chimney to indicate whether cardinals locked away in the Sistine Chapel have elected a pope is not created just by burning used ballots, the Vatican said Tuesday.

“We use smoke flares,” Paolo Sagretti, who was in charge of setting up the chapel for the election conclave, told AFP.

The ancient signalling system – still the only way the public learns whether a pope has been elected – used to involve mixing wet straw with the ballots to produce white smoke, and pitch to create black smoke.

After several episodes in which greyish smoke that could be interpreted as white or black created confusion, the Vatican introduced the surer system starting with the last conclave in 2005.

The Vatican now uses a mixture of potassium perchlorate, anthracene and sulphur to produce black smoke and potassium chlorate, lactose and rosin for white, the Vatican says on its website.

Two stoves stand in a corner of the chapel, one for burning the ballots and the other for the chemicals, with the smoke from both stoves going up a common flue.

An electronic control panel allows the choice between the two, and the correct compound is burned at the same time as the used ballots.