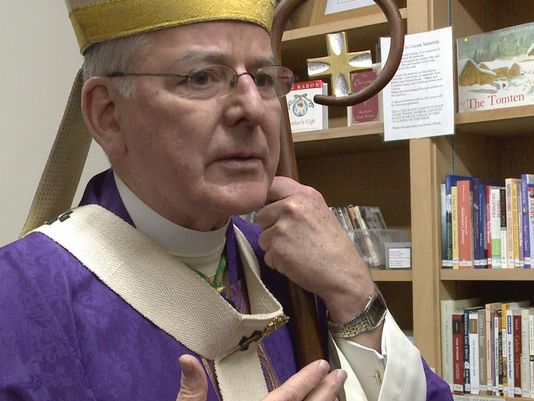 The Vatican said Monday that Pope Francis has accepted the resignations of Nienstedt and Auxiliary Bishop Lee Anthony Piche. The archdiocese was recently charged with ignoring repeated reports of inappropriate behavior by a priest who was later convicted of molesting two boys.

Nienstedt said in a statement Monday that his leadership has drawn attention away from the good works of the church. He asks for prayers for his successor.

In a separate statement, Bishop Piche says he is stepping down because his continued service prevents healing and hope for the people he has served.

Rev. Bernard Hebda, the Coadjutor Archbishop of Newark, New Jersey, has been named temporary administrator of the archdiocese.

US Archbishop Quits After Archdiocese Charged With Cover-Up

The embattled archbishop of St. Paul and Minneapolis and a deputy bishop resigned Monday after prosecutors there charged the archdiocese with having failed to protect children from unspeakable harm from a pedophile priest.

The Vatican said Pope Francis accepted the resignations of Archbishop John Nienstedt and Auxiliary Bishop Lee Anthony Piche. They resigned under the code of canon law that allows bishops to resign before they retire because of illness or some other “grave” reason that makes them unfit for office.

Earlier this month, prosecutors charged the Archdiocese of St. Paul and Minneapolis as a corporation of having “turned a blind eye” to repeated reports of inappropriate behavior by a priest who was later convicted of molesting two boys. No individual was named in the complaint.

The resignations came on the same day that the Vatican announced it was putting its former ambassador to the Dominican Republic, Jozef Wesolowski, on trial in a Vatican court on charges he sexually abused boys in the Caribbean country and possessed child pornography. Wesolowski, who has already been defrocked after being convicted in a canon law court, now faces possible jail time if convicted by the criminal tribunal of the Vatican City State.

The charges against the Archdiocese of St. Paul and Minneapolis came after a diocesan canon lawyer-turned-whistleblower alleged widespread cover-up of clergy sex misconduct in the archdiocese, saying archbishops and their top staff lied to the public and ignored the U.S. bishops’ pledge to have no tolerance of priests who abuse.

In a statement, Nienstedt said he was stepping down to give the archdiocese a new beginning. But he insisted he was leaving “with a clear conscience knowing that my team and I have put in place solid protocols to ensure the protection of minors and vulnerable adults.”

He had refused to resign as recently as last year after his former archivist, canon lawyer Jennifer Haselberger, charged that the church used a chaotic system of record-keeping that helped conceal the backgrounds of guilty priests who remained on assignment.

She said she repeatedly warned Nienstedt and his aides about the risk of keeping priests accused of abuse in ministry, but they took action only in one case. As a result of raising alarms, she said she was eventually shut out of meetings about priest misconduct, and later resigned.

In a statement, Piche said: “The people of the Archdiocese of Saint Paul and Minneapolis need healing and hope. I was getting in the way of that, and so I had to resign.”

The criminal charges against the archdiocese stem from its handling of Curtis Wehmeyer, a former priest at Church of the Blessed Sacrament in St. Paul, who is serving a five-year prison sentence for molesting two boys and faces prosecution involving a third boy in Wisconsin.

Prosecutors say church leaders failed to respond to “numerous and repeated reports of troubling conduct” by Wehmeyer from the time he entered seminary until he was removed from the priesthood in 2015. The criminal complaint says many people — including parishioners, fellow priests and parish staff — reported issues with Wehmeyer, and many of those claims were discounted.