By the CNN Wire Staff 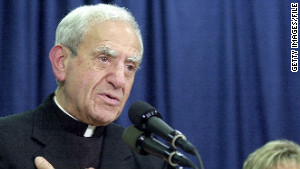 Cardinal Anthony Bevilacqua, who died on January 31, testified 10 times before grand juries in 2003 and 2004.

(CNN) — A Philadelphia archdiocese official on trial for allegedly covering up the sexual abuse of children has asked a court to throw out charges against him based on a 1994 memo showing Cardinal Anthony Bevilacqua ordered a list of suspected abusive Catholic priests to be destroyed.

Attorneys for Monsignor William Lynn asked a Philadelphia court to dismiss charges of conspiracy and child endangerment based on documents that Lynn had informed his superiors — including the cardinal — that priests in the archdiocese were assaulting children.

“The recent unexpected and shocking discovery of a March, 1994 memorandum composed by Monsignor James Molloy, Monsignor Lynn’s then-supervisor, on the topic of this review, clearly reveals that justice demands that all charges against Monsignor Lynn be dropped,” Lynn’s attorneys said in a filing.

As revealed in court papers filed on Friday, Molloy’s handwritten memo dated March 22, 1994, informed Bevilacqua that the secret list of 35 priests had been shredded per his instructions.

“On 3-22-94 at 10:45 AM I shredded, in the presence of Reverend Joseph R. Cistone, four copies of these lists from the secret archives,” Molloy’s memo stated. “The action was taken on the basis of a directive I received from Cardinal Bevilacqua at the Issues meeting of 3-15-94 ….”

According to the filing, the document was discovered in a locked cabinet in an archdiocese administrative office. It did not elaborate on how the document came to light.

Bevilacqua, who died on January 31, testified 10 times before grand juries in 2003 and 2004. A final grand jury report said it had no doubt that the cardinal knew about the danger posed by the accused priests and that his actions endangered thousands of children in the archdiocese.

The grand jury also concluded that Lynn had carried out the cardinal’s policies exactly as the cardinal directed.

“It should not be surprising to learn documents about child abusing priests were destroyed,” said Marci Hamilton, an attorney who has represented victims in many clergy sex abuse cases, including suits against the Philadelphia archdiocese. “That is consistent with the pervasive pattern of secrecy and the rule against scandal.”

According to the Philadelphia district attorney, this case represents the first time that U.S. prosecutors have charged not just the priests who allegedly committed the abuses, but an official who stands accused of failing to stop the assaults. Lynn had been responsible from 1992 until 2004 for investigating reports that priests had sexually abused children.

The grand jury alleged that Lynn knowingly allowed dangerous priests to continue in the ministry in roles in which they had access to children, according to the district attorney’s office.

A gag order imposed by a Philadelphia judge in the case remains in effect, barring all parties involved in the criminal case from talking to the media.