Investigation: Pope Benedict XVI has ordered the first inquiry of its kind in Britain

The Vatican has ordered an inquiry into claims of decades of sexual abuse at a London abbey and school.

A number of monks and teachers at Ealing Abbey and neighbouring St Benedict’s independent school in west London have been linked to alleged abuse from as far back as the 1960s right up until 2009.

The Congregation for the Doctrine of the Faith – which oversees the Church’s doctrine – has ordered a top-level investigation into the mistreatment of children there.

The apostolic visitation, as it is called, is the first inquiry of its kind in Britain and could be the first step towards disclosure of other sexual abuse by clerics that have been covered up.

It is being led by Bishop John Arnold, an auxiliary Bishop of Westminster, and Father Richard Yeo, president of the English Benedictine Congregation.

The move, which is acknowledgement by the Vatican that this is a serious issue, comes after an investigation by The Times last year revealed four decades of abuse by Father David Pearce, a priest at Ealing Abbey and a former headmaster of St Benedict’s junior school. Under scrutiny: The investigation is looking into claims of abuse at St Benedict’s from as far back as the 1960s

It sends a message to Ealing Abbey that a previous inquiry it commissioned by Lord Carlile of Berriew QC into the school will not be the final word on the scandal.

The report by Lord Carlile – a senior government adviser – will be published at the end of the month and given to the Department for Education, Charity Commission and Independent School’s Commission.

He was asked by the abbey last year to look into ‘past mistakes’ at St Benedcict’s.

Such an unprecedented move may also be interpreted as a high-level rebuke for the Catholic hierarchy in england, who regularly insist that it has very strong child protection policies.

Bishop Arnold said that recommendations following the visitation will be sent to the the Doctrine of the Faith who will decide whether they should be implemented. But the Vatican has come under fire after it emerged the results will not automatically be made public. After the revelations about Fr Pearce came to light, allegations of abuse were made against other former priests and teachers at St Benedict’s and other schools over the decades as further victims came forward, prompting police to begin a fresh inquiry.

Victims have said offenders were allowed to leave the school without a warning issued to future employers, leaving them free to go on and abuse pupils at other independent schools, The Times reported.

A CENTURIES-OLD WAY OF ROOTING OUT PROBLEMS

The rules for apostolic and other canonical visitations were established in the 16th century by the Council of Trent.

The recommendations or conclusions of the investigations, which usually take place behind closed doors, are rarely published.

They are ordered from the highest level of the Roman Catholic Church – in this case the Congregation for the Doctrine of the Faith on behalf of the Pope.

The role of apostolic visitors is to investigate the problem and report back to the Vatican, which then decides what, if any, action to take.

Father Laurence Soper, former Abbot of Ealing Abbey, is being sought by police after he jumped bail before he could be charged with child abuse offences.

A spokesman for the Archbishop of Westminster said that Bishop Arnold and Father Yeo had met senior members of Ealing Abbey last month.

‘The effective safeguarding of children and vulnerable adults is a priority for the Catholic church and Ealing abbey’s safeguarding policies and procedures formed part of the remit of the apostolic visitation.

Father Martin Shipperlee, Abbot of Ealing Abbey told The Times: ‘The visitors and the holy See will want to know that child protection is a priority here and that we’ve done all we can to ensure that what has happened in the past does not recur.’

The Pope called for a similar apostolic visitation to Ireland last year after reports were published into abuse in Catholic institutions in Dublin. 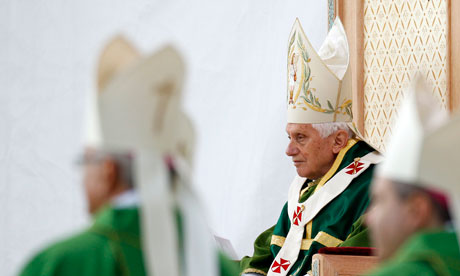 Pope Benedict has set a May 2012 deadline for the completion of a progress report into the abuse of children at Ealing Abbey but campaigner say it is unlikely to be met. Photograph: Max Rossi/Reuters

Alleged victims of sexual abuse have reacted coolly to the news of a  Vatican investigation into a London abbey, and have called for inquiries into other Roman Catholic institutions where children are claimed to have been mistreated.

The Congregation for the Doctrine of the Faith in Rome has ordered an “apostolic visitation” to uncover the scale of abuse at Ealing abbey, where monks and lay teachers have been accused of mistreating children at a neighbouring school, St Benedict’s, over decades.

It is the first inquiry of its kind into sexual abuse in Britain. Father David Pearce, a priest at Ealing abbey, was jailed in 2009.

Groups supporting alleged victims have questioned the effectiveness and integrity of an internal inquiry, especially given that its findings will remain secret.

Pete Saunders, of the National Association for People Abused in Childhood, said it was a public relations exercise and akin to “putting Dracula in charge of a blood bank”.

Anne Lawrence of Ministry and Clerical Sexual Abuse Survivors, said although the Ealing inquiry showed the Catholic hierarchy was beginning to understand the concept of institutional responsibility, there were other schools and other places that warranted investigation. There were, she alleged, “more than 20 schools where there was systematic abuse and we would like to see inquiries into all of them”.

They described them as shambolic, toothless and unlikely to achieve anything by May 2012, when the pope’s deadline for a progress report expires.

The talks were intended to come up with a care package for survivors of clerical sexual abuse.

Graham Wilmer, who heads the Lantern Project and says he was abusedby a Catholic priest as a teenager, said: “We were prepared to talk to [the institution] that had harmed us, even though it was uncomfortable … [But] we can’t trust them. What has effectively has happened is nothing.”

The Catholic church in England and Wales has not suffered the same fate as those in Ireland and the US, which have been left reeling by abuse allegations.

It has defended its child protection procedures, describing them as robust, and has apologised for past behaviour. But there is evidence to suggest that for all its commitment to healing and contrition, old attitudes prevail.

Two civil cases show the church continuing to engage in a war of attrition with victims who were abused as children.

It has denied responsibility for the alleged sexual abuse of a Portsmouth woman by one of its priests, saying the cleric was not an employee. Should the church win, it will avoid having to pay compensation to victims in the future.

In another case, involving more than 150 former pupils suing for an estimated £8m for sexual and physical abuse they claim to have suffered at St William’s boys home in Market Weighton, Yorkshire, the diocese of Middlesbrough is contesting a court ruling that it is jointly liable with the De La Salle Brotherhood, a Catholic order of lay teachers, for the alleged abuse. St William’s was owned by the diocese but many of the staff were members of the Brotherhood.

Claims were first launched in 2004 when the home’s former principal, Brother James Carragher, was jailed for 14 years for abusing boys. The appeal will be heard next July in the supreme court.