Police investigating allegations of sex offences against boys and young men by a retired Church of England bishop said seven more people have come forward claiming they were abused.

The Rt Rev Peter Ball, 80, was arrested at his home near Langport, Somerset, on Tuesday on suspicion of sex offences against eight boys and young men aged from 12 to their early 20s in East Sussex and elsewhere in the late 1970s and 1990s, sources said.

Since his arrest, Sussex Police said a further seven people have come forward making allegations of abuse against them.

A number of people have also stepped forward with potentially useful information, although not alleging that offences had been committed against them.

Mr Ball, a former Bishop of Lewes who resigned as Bishop of Gloucester in 1993, was released at his home on the afternoon of his arrest on medical advice. Police will now question him at a later date.

He was arrested at around the same time as a second clergyman, an unnamed 67-year-old retired priest, who was held at his home near Haywards Heath, West Sussex, on suspicion of separate sex offences against two male teenagers aged 17 and 18 in East Sussex between 1981 and 1983.

Police said three more people have alleged abuse by him since his arrest, mainly in Sussex. He has been freed on police bail until November 29, pending further inquiries.

Detectives said they were interested to hear from anyone else as part of their inquiry, codenamed Operation Dunhill, saying that every report was being followed up.

Detective Chief Inspector Carwyn Hughes, who is leading the investigation, said: “Calls are treated with great sensitivity. The force will always take seriously any allegations of historic sexual offending, and every possible step is taken to investigate whenever appropriate.

“Allegations of historic offences are treated just as seriously as any more recent offences.”

The arrests follow a review and subsequent inquiry over the past six months by a team of Sussex Police detectives.

The investigation followed receipt by police in May this year from Lambeth Palace of two reports from a CofE safeguarding consultant.

They contained reviews of Church files relating to safeguarding matters of young people in the Diocese of Chichester during the 1980s and early 1990s.

Officers described it as a “very complex inquiry” during which many people, who are all now adults, have had to be traced along with witnesses and records.

Police said there were still no allegations of recent or current offending, and there was no suggestion that any young people are at risk.

The Rt Rev Paul Butler, Bishop of Southwell and Nottingham and chair of the Churches National Safeguarding Committee, has said that the Church was working closely with Sussex Police with their investigation.

And the Bishop of Chichester, the Rt Rev Martin Warner, said the Church authorities were committed to bringing any alleged criminal matters to the attention of the police and “to ensure that the Diocese of Chichester is a safe place for all in our Church communities”.

A retired bishop has been arrested over suspicions that he sexually abused children in the 1970s and 1980s.

The Right Reverend Peter Ball, who is thought to be the highest-ranking clergyman in the Church of England to be arrested over child abuse, faces allegations that he molested eight boys and young men aged between 12 and their early 20s. He was detained at his home in Langport, Somerset.

The 80-year-old served as the Bishop of Lewes and Gloucester before resigning in 1993. The claims against him relate to his time serving in the Diocese of Chichester.

The investigation into him began in spring this year following a review of his files by the Church.

A retired priest man was also arrested in West Sussex over separate allegations that he abused two boys between 1981 and 1983, though the 67-year-old suspect has not been named.

Detective Chief Inspector Carwyn Hughes of Sussex Police, who is leading the investigation, said: “The Church of England, including the Diocese of Chichester, are co-operating fully with police.

He added: “Allegations of historic offences are treated just as seriously as any more recent offences.”

The police said that no children are thought to have been at risk from either men in recent years.

London (CNN) — A retired bishop and a retired priest have been arrested by British police on suspicion of sexual offences against boys and young men — one as young as 12 — in the 1980s and 1990s.

The 80-year-old former Church of England bishop, from Somerset in south-west England, was questioned in connection with eight alleged offences before being released on medical advice.

Police say the man — the highest-ranking church official to be arrested on abuse allegations — will be questioned again at a later date.

His former colleague, a 67-year old retired priest from West Sussex, in southern England, was questioned over two alleged offences before being released on bail pending further inquiries.

The pair are understood to have worked alongside each other in the Chichester Diocese, but police say the allegations are being treated separately, and that there is no suggestion that the men acted together.

The latest sexual abuse scandal to hit the UK — this one rocking the Anglican Church — comes after two other British institutions, the BBC and the NHS, were caught up in the case of Jimmy Savile, a British TV presenter accused of assaulting vulnerable teenagers.

Peter Saunders, of the National Association for People Abused in Childhood (NAPAC), told CNN his organization had been inundated with reports of abuse since the Savile allegations came to light: “We’ve had four or five times as many calls to our support line and emails and messages… just in these last few weeks — it is overwhelming. I think what’s happening is that we are recognizing, as a country, the huge extent of the problem of child abuse.”

Detective Chief Inspector Carwyn Hughes of Sussex Police, who is leading the investigation, known as Operation Dunhill, said the Church of England was co-operating fully with police.

The Right Reverend Paul Butler, Bishop of Southwell and Nottingham and Chair of the Churches National Safeguarding Committee said in a statement: “The Church of England takes any allegations of abuse very seriously and is committed to being a safe place for all.

“We have robust procedures and policies in place, but we can never be complacent. We would like to urge any victims or those with information to feel free to come forward knowing that they will be listened to in confidence.”

Butler said the CofE — which wanted its churches to be “places of safety and joy, righteousness and justice” — had offered support to those involved in Operation Dunhill.

One of the alleged victims in the case told CNN he was grateful to the Archbishop of Canterbury, Rowan Williams, for instigating the review which had led to police investigating the abuse allegations, but said he wanted the Church of England to issue an official apology.

Sussex Police insists that there are “no allegations of recent or current offending” and that there is nothing to suggest any young people are currently at risk. 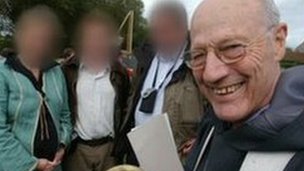 The bishop resigned in 1993 after receiving a police caution

The Church of England has carried out an investigation into a former Sussex bishop, the BBC has learnt.

The Right Reverend Bishop Peter Ball resigned in 1993 after receiving a police caution for committing an act of gross indecency against a teenager.

Files kept at Lambeth Palace about the former Bishop of Lewes are being scrutinised by police.

A Church of England spokesman said the church had instigated a review of the files and could not comment further.

A church spokesman said: “At our instigation a former police officer, now a safeguarding adviser, has undertaken a review of all files relating to a retired bishop.

“On the basis of the findings, this review has now been forwarded to Sussex Police.

“We cannot comment further at this stage while the police are conducting their inquiries and processing the information.”

A spokesman for Sussex Police said: “Over the past 10 days we have received from Lambeth Palace two reports from a Church safeguarding consultant, which contain reviews of Church safeguarding files relating to historic issues in the Chichester Diocese. We have also received the files themselves.

“The reports and files relate to matters more than 20 years ago and we will review the contents in order to establish whether any police investigation of possible criminal offences would be merited.

“This review is likely to take several weeks. We are not prepared to expand on this statement at this time.”

Ann Lawrence, from the sexual abuse survivors group Minister and Clergy Sexual Abuse Survivors, said it was “a major first step” for the Church of England.

Neil Todd, a victim of the bishop who waived his anonymity to give an interview to the BBC, said: “It is an investigation which to be honest is well overdue.”

Mr Todd, who first met Bishop Ball at the age of 16 and was abused while he was a trainee monk, said: “It stayed with me throughout my life’s journey and even this far down the track it doesn’t feel like there’s any real closure.”

Speaking from his home in Australia, he said: “The abuse was varied. The worst of it was mental abuse.

“Obviously there was a component of sexual abuse. But basically it was mind games and controlling behaviour.”

And he said: “When it came to the abuse, the abuse was sexual, mental and physical. He was just not a very nice human being.”

After his resignation, Bishop Ball, who is now 80, was given permission to officiate by the Church and he continued working in churches until 2010.

A spokesman for Bishop Ball said the clergyman would not be making a comment. 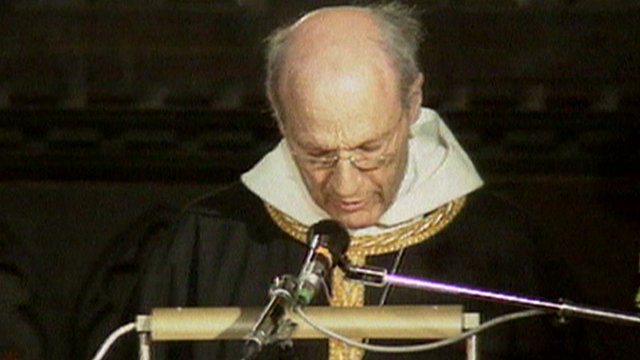 A dossier of information about The Right Reverend Bishop Peter Ball, a former Bishop of Lewes, has been passed to Sussex Police

THE BISHOP of Gloucester, the Rt Rev Peter Ball, has resigned after admitting gross indecency with a 19-year-old man apparently interested in joining a monastic order that the bishop had founded.

Bishop Ball was formally cautioned yesterday morning after admitting his guilt and announced his resignation immediately afterwards. No further charges will be brought.

The Archbishop of Canterbury, Dr George Carey, said the Bishop’s resignation was a cause of great sorrow. ‘Bishop Peter is a highly gifted and original man who has inspired many people to deepen their faith in Jesus Christ.

‘However, given that he has accepted the caution, his resignation is a responsible decision made in the best interests of the diocese of Gloucester and the wider Church.’

Bishop Ball, who has been in seclusion on the Archbishop’s orders since the news of police inquiries broke in December, issued a statement saying: ‘The last 12 weeks of isolation and anxiety have produced particular strains, causing serious damage to my health. I regret, with great penitence and sorrow, the circumstances which have led to this police caution.’

Bishop Ball has an identical twin brother, Michael, who is Bishop of Truro. The two men founded together a monastic order near Telford, Shropshire, in 1960. Both usually wear a monastic habit in public.