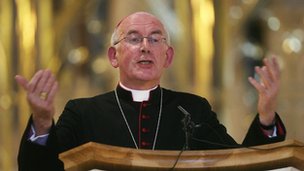 Cardinal Sean Brady has issued his response to the BBC’s This World documentary, The Shame of the Catholic Church.

Here is the full text of his statement.

“On Tuesday 1 May 2012, the BBC ‘This World’ series broadcast a programme entitled ‘The Shame of the Catholic Church’ on the BBC Northern Ireland network. In the course of the programme a number of claims were made which overstate and seriously misrepresent my role in a Church Inquiry in 1975 into allegations against the Norbertine priest Fr Brendan Smyth.

“In response to the programme I wish to draw attention to the following:

“Six weeks before broadcast (15 March 2012) I drew the attention of the programme makers to a number of important facts related to the 1975 Church inquiry into Brendan Smyth, which the programme failed to report and which I now wish to restate for all other media who report on this matter:

“I deeply regret that those with the authority and responsibility to deal appropriately with Brendan Smyth failed to do so, with tragic and painful consequences for those children he so cruelly abused. I also deeply regret that no guidelines from the State or the Church were available to guide the sincere and serious effort made to respond to the allegations made by the two boys interviewed in the Inquiry process. With many others who worked regularly with children in 1975, I regret that our understanding of the full impact of abuse on the lives of children as well as the pathology and on-going risk posed by a determined paedophile was so inadequate. It is important to acknowledge that today both the Church and the State have proper and robust procedures in place to respond to allegations of abuse against children. I fully support these new procedures which include the obligation to report such allegations promptly to the civil authorities. I have worked with others in the Church to put these new procedures in place and I look forward to continuing that vital work in the years ahead.”