Cardinal George Pell maintains he is innocent of historical child sexual assault allegations as police decide whether to charge the senior Catholic figure.

Victoria Police received advice from the Director of Public Prosecutions about its investigation into Cardinal Pell, days after fresh details of the claims were aired. Speaking in Rome on Wednesday, Cardinal Pell reiterated his rebuttal of all the allegations of abuse made against him.

Talking to reporters, the Cardinal said he would “just like to restate my innocence”.

“I stand by everything I have said at the royal commission [into institutional responses to child sexual abuse] and in other places,” he said.

“We have to respect due process, wait until it is concluded and obviously I will continue to co-operate fully.” Meanwhile, one of Australia’s most senior Catholic clerics has defended Cardinal Pell from “relentless character attacks” in relation to the allegations.

Archbishop Anthony Fisher released a strongly worded statement on Wednesday, saying Cardinal Pell was entitled to the presumption of innocence.

“Justice must be left to run its course,” he said.

“It is unfortunate that in the very week this happens, media and authors publish and repeat allegations, some of which have already been thoroughly answered.

“This cannot assist the impartial pursuit of justice. What is clear, however, is that Cardinal Pell has co-operated in every way with multiple police, parliamentary and royal commission investigations.

“Everyone supports just investigation of complaints but the relentless character attacks on Cardinal Pell, by some, stand the principle of innocent-until-proven-guilty on its head.

Andrew Halphen, from the Law Institute of Victoria, said it was “completely inappropriate” that information about the investigation into Cardinal Pell had again been leaked to the media.

He said the “lack of regard” for the Cardinal’s rights were “a startling affront” to the cornerstone of the legal system.

“In the event [Cardinal] Pell is charged I hold grave concerns that he will receive a fair trial,” said Mr Halphen, the co-chair of the Criminal Law Section.

“There is a serious risk a stay application could be made should this matter reach the courts owing to the prejudicial material that has been published.

“I can think of no other matter in recent memory where a DPP’s advice to the police in respect of whether or not to charge a person finds its way to the front page of a major news publication before a person is actually charged.”

He said Cardinal Pell could refuse to step outside the Vatican walls to avoid prosecution, as there is no extradition treaty in place legally compelling him to return to Australia.

However, Professor Rothwell said that was highly unlikely. He said Cardinal Pell had so far co-operated with police, sought to engage in legal proceedings and vehemently denied any allegations of misconduct.

If the Cardinal did not agree to an extradition, Professor Rothwell conceded it would be difficult for Victoria Police to force him to return.

Yet, Australia could appeal to Italy to make the extradition request on its behalf.

Under this situation, any clergy wanted on charges in Australia could be arrested by Italian authorities if they left the holy city.

“The mere fact there is no extradition treaty does not create an impossible barrier to extradition because Australia has diplomatic relations with the [Vatican],” Professor Rothwell said.

“There are legal relations between the two countries [Australia and Italy], so theoretically, an extradition request could be made.”

It is believed the DPP in Victoria has said that any decision to charge Cardinal Pell would be “an operational one” and should be made by senior police.

Traditionally, the decision to lay charges is based on whether it is “more likely than not” that the charges would result in a successful prosecution.

In historic sex crime investigations, police must consider the severity of the allegations, the credibility of witnesses, potentially corroborating evidence, and a lack of forensic evidence.

Cardinal Pell has always vehemently denied sex abuse allegations made against him.

On the weekend, lawyers for Cardinal Pell strongly denied the allegations, and said they were false, “unjustifiable, scandalous, deliberate and calculated to cause the most shocking damage imaginable to Cardinal Pell”.

Justice must run its course: Sydney archbishop on abuse claims against Cardinal Pell 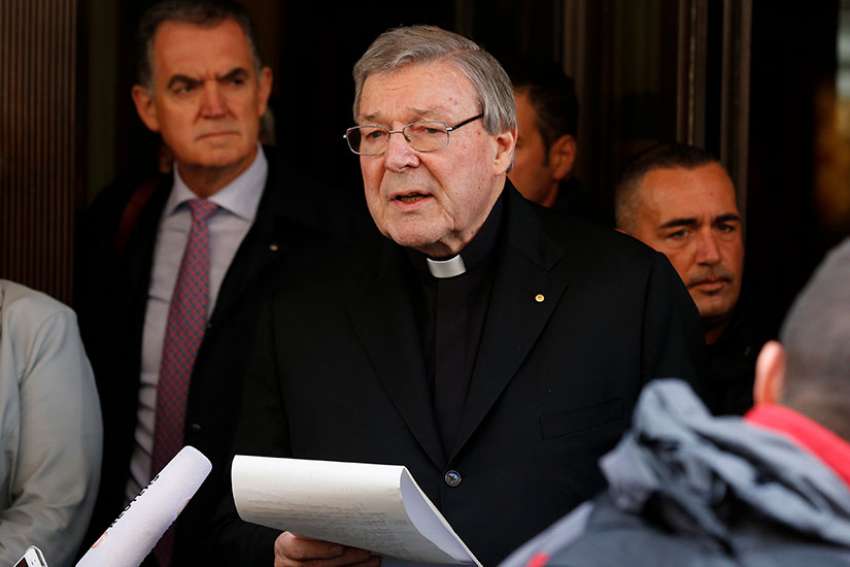 Australian Cardinal George Pell reads a statement to media March 3, 2016. Public prosecutors have submitted recommendations to Victoria Police on whether to try Australian Cardinal Pell on decades-old abuse allegations, but their advice has not been made public. CNS photo/Paul Haring

SYDNEY – Public prosecutors have submitted recommendations to Victoria Police on whether to try Australian Cardinal George Pell on decades-old abuse allegations, but their advice has not been made public.Until police decide how to proceed, Sydney Archbishop Anthony Fisher said he will not be commenting on the case.

“Justice must be left to run its course,” Archbishop Fisher said in a statement May 17.

Archbishop Fisher said Cardinal Pell, currently head of the Vatican Secretariat for the Economy, “has cooperated in every way with multiple police, parliamentary and Royal Commission investigations.”

“Everyone supports just investigation of complaints, but the relentless character attacks on Cardinal Pell, by some, stand the principle of innocent-until-proven-guilty on its head,” Archbishop Fisher said. “Australians have a right to expect better from their legal systems and the media. Even churchmen have a right to ‘a fair go.'”

Last July, allegations surfaced in a report by the Australian Broadcasting Corp. featuring several people who accused Cardinal Pell of sexual assault; at least one of the accusations had been found to be unsubstantiated by an Australian court in 2002. Some accusations dated to the late 1970s, when Cardinal Pell was a priest in Ballarat, Australia.

At the time the allegations surfaced, Cardinal Pell dismissed them as “nothing more than a scandalous smear campaign,” and a statement issued by his office said that “claims that he has sexually abused anyone, in any place, at any time in his life are totally untrue and completely wrong.”

In October, Australian police questioned Cardinal Pell in Rome regarding the accusations.