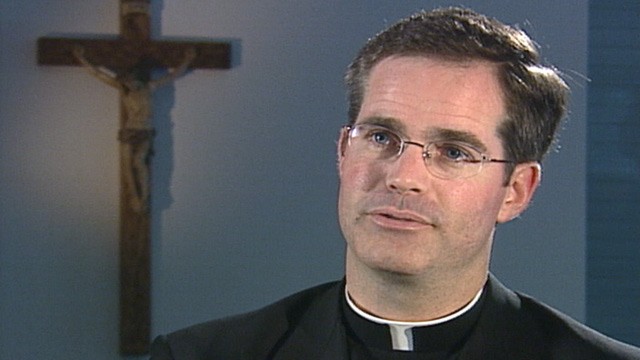 Father Thomas Williams, a spokesman for the embattled Catholic order known as the Legion of Christ, has issued a statement acknowledging that he had a sexual relationship with a woman and fathered her child. (ABC News)

A prominent American priest in the Legionaries of Christ, a troubled Catholic order whose founder was denounced by the Vatican for sexual improprieties, has admitted having a sexual relationship with a woman and fathering her child.

Father Thomas Williams, who has appeared on CBS and NBC and was interviewed by ABC News for a 2010 report on the Legion, made the acknowledgement after an activist who had sought reform in the order contacted the Vatican with his suspicions.

“I am truly sorry to everyone who is hurt by this revelation,” said Williams in a statement. He said that he would be taking a year’s leave from his public duties “to reflect on my commitments as a priest.”

According to the National Catholic Reporter, the Legion has confirmed that seven other priests are now being investigated for the alleged abuse of minors. The Legion has more than 800 priests.

The Legion of Christ was founded by Mexican priest Marcial Maciel in 1941, who built it into a powerful international order with 70,000 followers and many wealthy benefactors. Maciel, however, was accused of sexual abuse, drug abuse and of fathering multiple children with women in Europe and Mexico. In 2006, Pope Benedict banned Maciel from active ministry after 20 men testified that he had molested them when they were teens.

After Maciel’s death in 2008, the Legion issued a public statement acknowledging “reprehensible actions” by its founder. The Vatican began investigating the Legion’s finances. In 2010, the Vatican denounced Maciel and appointed an outsider to oversee the Legion and manage its reform. The Vatican said Maciel had committed “objectively immoral acts,” committed “true crimes,” and lived a “life without scruples or authentic religious sentiment.”

The Legion’s top official in North America sent a letter to members Tuesday after Williams made his public statement. “In the wake of all we have been through as a movement in the past several years, it won’t surprise me if you are disappointed angry or feel your trust shaken once again,” said Father Luis Garza.

Williams did not say give an age or gender for his child or identify the mother. “A number of years ago I had a relationship with a woman and fathered her child,” he said. “I am deeply sorry for this grave transgression and have tried to make amends. . . . I am truly sorry to everyone who is hurt by this revelation, and I ask for your prayers as I seek guidance on how to make up for my errors.”

The activist who alleged that Williams had fathered a child also claimed that Williams had been involved in sexual relationships with female students while stationed in Rome. Williams did not comment on those charges. Williams, a Michigan native, has appeared on CBS, NBC and other networks as a religion analyst and has authored more than a dozen books.