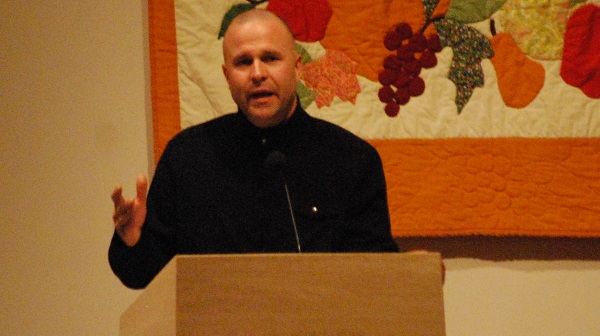 Father Joe Gorman, pastor of Aurora’s Our Lady of Grace Catholic Parish, announced his decision to leave the priesthood Saturday.

Fr. Gorman said, in a letter distributed to parishioners following Saturday’s mass, his decision was his and his alone.

His resolution comes after two months of speculation over his future after he was asked by Cardinal Thomas Collins of the Archdiocese of Toronto in January to “take some time away from the parish”, citing “financial irregularities” and “involvement in marriages not sanctioned by the Catholic Church.”

According to the Archdiocese, the marriage in question involved Fr. Gorman presiding at a ceremony where one of the individuals had been previously married and had not received an annulment, a requirement for marriage within the Catholic Church. After this initial incident, they say he presided at a wedding of two Catholics from the Aurora parish that was held in an Anglican chapel “after being advised on more than one occasion this was not permitted.”

They went on to say he completed marriage records following the ceremony “to indicate a minister from another denomination officiated even though Fr. Gorman officiated. This activity was contrary to the laws of the Catholic Church and violated the Civil Marriage Act, putting his own license in jeopardy.”

As for the financial irregularities, the Archdiocese said Fr. Gorman did not follow “clearly outlined procedures on accounting of certain special collections” but said they did not suspect Fr. Gorman had any personal financial gain from the irregularities.

“This ongoing pattern of disregarding church procedures led to a series of meetings with archdiocesan officials,” said Neil MacCarthy, spokesperson for the Archdiocese, at the time. “Ultimately, Cardinal Collins asked Fr. Gorman to step away from the parish for a period of prayer and reflection.”
The result of that reflection was made clear in Fr. Gorman’s letter, dated April 25.

“I first want to thank you for all the good wishes and support you have shown me over the last number of months,” wrote Fr. Gorman. “I love this parish. It is such a community of faith, I loved being a part of it. As your Pastor, I was always in awe of how you ministered to each other. You literally lived our Lord’s message of faith, love and peace. It was so inspiring to me.

“This journey we have been on, and I say ‘we’ because it affected all of us, has not been easy, but after a lot of prayer, thought and family support, I have decided to leave the priesthood. My heart and my mind are made up and I am happy with my decision. It is my decision and mine alone. Although I will miss seeing the parishioners of Our Lady of Grace on a daily basis, I feel truly at peace with myself and with God.

“Life is a gift that is meant to be lived with great love and faith, and always with hope. My hope for you is that you will continue to live your life in faith and love, and care for one another as you always have.”

Parishioners were told at Saturday’s Mass that Fr. Gorman asked the Archdiocese for the chance to address parishioners directly through this letter. They were duly left on a stack near the exit of the Yonge Street church, alongside a stack of letters to the OLG community by Cardinal Thomas Collins.

As parishioners exited the church, many told The Auroran they were left cold by the decision to leave the messages to be picked up on the way out, rather than read aloud at the front of the church, as was the case this past winter with the initial letter from Cardinal Collins.

In this second message, in which Cardinal Collins calls for “healing and reconciliation”, he said he was grateful for the Parish’s “patience and prayers.”

Since then, he said he had “remained in contact and dialogue” with Fr. Gorman regarding his request to “reflect on his responsibilities as a pastor and to follow a path of personal reflection that would enable him to grow in his priestly life before returning to pastoral ministry.

“Unfortunately, Fr. Gorman has declined my requests to participate in the proposed path of reflection and has recently informed me of his decision to leave the priesthood,” said Cardinal Collins. “We are all saddened any time a priest decides to leave the priesthood. I am grateful to Fr. Gorman for the many contributions to the faithful he has provided since his ordination in 2008 and know that you will join me in praying for him.”

In an email to The Auroran, Mr. MacCarthy declined to elaborate on just what was entailed in Cardinal Collins’ “proposed path of reflection” “out of respect for the discussions that took place between Cardinal Collins and Fr. Gorman,” other than “several options were presented to Fr. Gorman.”

Since Fr. Gorman was asked to “take some time away”, the parish has been served by Fr. Thomas Lim. Cardinal Collins said Fr. Thomas will continue in this role until a new pastor is named in the summer.

The Auroran reached out to Fr. Gorman for comment.