A former small claims court deputy judge pleaded guilty Thursday to stealing a quarter of a million dollars from the Catholic church, admitting he used the money pilfered from the St. Patrick’s Church cemetery to pay his own personal bills.

Ottawa lawyer Ronald Houlahan was the chair of the St. Patrick’s Church Fallowfield cemetery committee when he wrote cheques from the cemetery account to pay off his own expenses, such as bills for his law office phone, secretarial services, insurance, cellular phone, cable TV and personal credit cards, an Ottawa court heard.

In addition to the bill payments, assistant Crown attorney John Semenoff said some of the sales of burial plots and internment rights were deposited directly into the personal accounts of the 76-year-old Houlahan.

“Of the 269 contracts for sale of plots and internment rights, 50 payments did not go through the cemetery account and cannot be accounted for,” said Semenoff, adding that the missing sales added up to $72,721.

His duties as chair included managing the cemetery’s finances, including depositing money into a perpetual care and maintenance fund that would provide for the continued maintenance of the cemetery following the purchase of a plot and burial. A percentage of each sale was supposed to go into the fund, but Houlahan never once made a payment, leaving the account short $173,695, Semenoff said.

Houlahan also neglected to file tax returns or financial reports as he was legally required to do during his time as the chair of the cemetery committee, court heard.

The wheels came off the scheme in the summer of 2011, when Benoit Bariteau, the director of cemeteries for the archdiocese, contacted Houlahan about the deficiencies. Houlahan assured Bariteau everything was in order, despite the lack of financial reports. Bariteau persisted however, and asked parish priest Stephen Amesse to track down the records. Houlahan eventually provided the records in August 2011, and was removed from his duties.

Before handing the records over, Houlahan deposited a cheque for $3,435.11 — the exact amount he had paid to his own personal credit card to cover the purchase of a device used to lower coffins into a grave that was being used by a cemetery services company that Houlahan was running with his son. (The actual cost of the lowering device was $3,015.67, although Houlahan wrote a cheque from the cemetery account that covered the exact amount of the outstanding balance on his credit card, court heard.)

A subsequent audit conducted for the archdiocese revealed approximately $365,000 couldn’t be accounted for; however, the Crown said they were giving Houlahan the “benefit of the doubt” regarding the payment of honorariums and other monies that they couldn’t prove beyond a reasonable doubt were stolen.

Court heard that after the audit commenced, Houlahan produced invoices that he said showed he was owed $260,000 for services he provided.

“It would appear that Mr. Houlahan produced these invoices in an attempt to account for some of the missing money,” Semenoff said.

Houlahan also told the auditors he had done pro bono legal work on behalf of the cemetery, Semenoff said.

The Crown and defence agreed that $250,000 was taken by Houlahan, although the two sides agreed that a restitution order would only cover the $173,695 that was still outstanding from the maintenance fund.

Houlahan’s lawyer, Pat McCann, said his client intended to immediately pay back $70,000 of that amount when he was sentenced, and accepted that the court would order he pay back the rest of what was left over. A sentencing hearing has been scheduled for April 21.

The law society had been seeking to suspend the licence after learning that Houlahan was criminally charged more than two years ago but never reported it to the law society.

Houlahan and two other members of the cemetery committee who were never criminally charged had also been sued by the archdiocese in 2014, although that lawsuit is no longer active.

The Law Society of Upper Canada is seeking to suspend the licence of an Ottawa lawyer accused of defrauding the Catholic Church of hundreds of thousands of dollars.

Ronald Houlahan is scheduled to stand trial in March on criminal charges of fraud, theft and possession of the proceeds of crime after he was accused by the Catholic Church of receiving, misusing or failing to properly account for $365,870 over an eight-year period while he was the chair of the St. Patrick’s Church Fallowfield cemetery committee.

The law society brought a motion last month to have Houlihan’s licence to practise law suspended after discovering the 76-year-old lawyer and former small claims court deputy judge had been criminally charged more than two years ago in November 2014. The law society alleges that Houlahan never told it about the charges, as he is required to do under law society bylaws.

The law society alleges it only learned about the criminal case against Houlahan when one of its investigators was speaking to an Ottawa police fraud investigator about an unrelated investigation.

The law society intends to argue during a hearing scheduled for Friday that the licence suspension is necessary because there are reasonable grounds to believe there is a “significant risk” of harm to members of the public or the public interest in the administration of justice if his licence to practise law isn’t suspended.

Houlahan declined to comment on the law society’s efforts to suspend his licence when reached by the Citizen by email Tuesday. However, in a letter to the law society sent in November 2016, Houlahan indicated that he intended to plead not guilty to the charges, according to an affidavit filed in support of the law society motion.

Houlahan first came under a law society investigation in 2012 after the Roman Catholic Episcopal Corporation of Ottawa complained about him. However, the law society discontinued the investigation in March 2014 after the church filed a lawsuit against Houlahan and two other members of the cemetery committee.

The Catholic Church’s lawsuit — which is no longer active — alleged that Houlahan received $192,729 for “unknown disbursements,” $71,637 in missing sale and burial proceeds, and $22,690 for unsupported payments to other parties over an eight-year period between 2003 and 2011.

The statement of claim also alleges that Houlahan issued bills for legal services supplied to the parish; the church alleges he was never retained as legal counsel.

In his statement of defence, Houlahan denied the allegations, describing them as “unjustified, made in bad faith and with malice.” He further alleged the church’s auditors made their findings before he could provide records they had requested. Houlahan also filed a $100,000 counterclaim for defamation.

The lawsuit also named two other members of the cemetery committee, Michael Rooney and Glenn Clarke, although the allegations against them focused mainly on their receiving honorariums. Rooney was accused of diverting $24,800 and Clarke of $23,300. Both men also filed counterclaims alleging defamation and wrongful termination of their contracts.

In their statements of defence, Rooney and Clarke alleged that the payments to members of the cemetery committee were known to and accepted by the archdiocese and employees of St. Patrick’s parish. Neither man has been criminally charged.

Lawyers for all four parties either didn’t immediately respond or declined to comment on how or why the civil suit is no longer active, although court staff said a mediation session was held in March 2016. 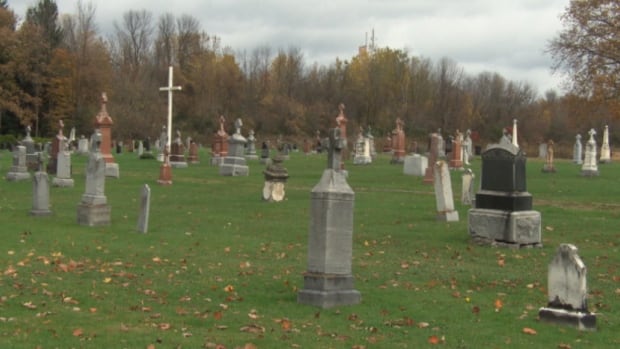 St. Patrick’s Roman Catholic Cemetery is at the centre of a civil suit. (CBC)

The Archdiocese of Ottawa is suing three men for nearly $750,000 for allegedly abusing their positions as members of a cemetery committee to misappropriate funds for nearly a decade.

The archdiocese alleged in a statement of claim that the men “undertook a series of deceitful transactions for the unlawful purpose of taking funds from the cemetery, and transferring or using said funds to their own benefit” between 2003 to 2011.

It claims the men were negligent, breached their fiduciary duties and involved in a conspiracy connected to the St. Patrick’s Roman Catholic Cemetery in west Ottawa, which is operated and managed by volunteers.

Ronald Houlahan, Michael Rooney and Glenn Clarke are accused of diverting $413,971 to themselves during their time on the committee.

Rooney and Clarke have also filed a crossclaim against Houlahan. In a statement of defence, the men argue Houlahan was responsible for managing the cemetery’s finances and the money they received was for services rendered.

The court has ordered a mediation session before mid-March 2015.

The Archdiocese of Ottawa said in a statement of claim that it discovered irregularities in the cemetery finances in 2011. It said it conducted a review because it had not received an annual report in eight years.

A “significant portion” of the “misappropriated” funds were distributed through cheques in Houlahan’s name that had been co-signed by Rooney, according to the statement of claim.

Houlahan, a lawyer who at the time also served as an Ontario Small Claims Court deputy judge, is accused of issuing bills for legal services rendered to the parish even though he was never retained as counsel.

Houlahan admitted in a statement of defence that he received $42,000 in honoraria — far short of the $365,870 the archidocese accused him taking.

He also claims his annual contract as a deputy judge was not renewed as a result of the allegations.

The archdiocese hired Deloitte to review the cemetery’s finances, but Houlahan claims that the report was completed before he could provide records and documents pertaining to the case.

Houlahan said in a statement of claim that an “impartial review of all of the records and documents and other evidence would explain and justify all of the receipts and disbursements of funds referred to in this litigation, such that there would be no claim.”

​In a statement of defence, Rooney said he has been paid between $24,000 and $38,000 annually for his cemetery committee work since 1997. His work included grass maintenance and burial services.

The statement also detailed that Clarke, who joined the committee in 2001, was paid between $600 and $4,100 annually for his work, which included marking graves, fixing headstones and assisting in burials.

Both claim that their termination from the cemetery committee, in letters received in the summer of 2011, was improper, and request 18 months of salary in lieu if reasonable notice. Both were paid to continue to dig graves and maintain the cemetery until Nov. 2011, according to the statement of defence.

Ottawa Catholic Archdiocese seeks $736,000 in damages after allegations of fraud

There are more allegations of fraud within Ottawa’s Catholic Church.

CTV News has learned the allegations target three men– including an Ottawa lawyer– who sat on the St. Patrick’s Fallowfield Cemetery Committee.

The Ottawa Archdiocese is suing the men for 736-thousand dollars in damages.

St. Patrick’s Fallowfield Catholic Church is one the most popular parish’s in west-Ottawa.

The troubling allegations date back more than a decade, reported for the first time now only after a CTV investigaton.

According to court documents, The Roman Catholic Episcopal Corporation of the City of Ottawa has launched a lawsuit seeking damages of 736-thousand dollars.  The civil lawsuit names three men, Ottawa lawyer Ronald Houlahan, Michael Rooney and Glenn Clarke, all former members of the church’s cemetery committee.

It’s alleged they used “deceitful transactions” to divert $413,970 from the St. Patrick’s Fallowfield Cemetery.  The allegations of fraudulent activity date back to 2003 and continued until 2011. A forensic investigation alleges that over those eight years money from the sale of plots had gone missing, honorariums were handed out, and unsupported payments were made through the signing of cheques by all three men.  The alleged irregularities only discovered after a review of the cemetery’s finances in 2010.

In the case involving St. Patrick’s Cemetery, the three men, through their lawyers, told CTV they had no comment while the case is in front of the courts. The archdiocese is also refusing to comment.

This is a civil lawsuit; it does not involve criminal charges. And it’s not clear if Ottawa police were ever called in to investigate.  The church is also facing countersuits by the three men.  They are seeking damages for defamation, all claiming in their defence that the honorariums were authorized.