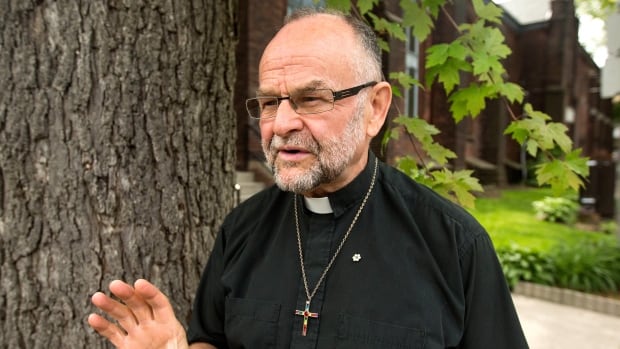 Brent Hawkes, pastor of the Metropolitan Community Church and a leading gay-rights activist, faces charges of gross indecency and indecent assault in connection with allegations from the 1970s in Nova Scotia. (Eric Foss/CBC)

It’s a sign of how prominent Rev. Brent Hawkes has been in the fight for gay rights in Canada that Toronto Mayor John Tory, Ontario Premier Kathleen Wynne, and future prime minister Justin Trudeau all sent him personal video messages for his 65th birthday last June.

Now Hawkes is facing charges of indecent assault and gross indecency in connection with what police in Nova Scotia describe as allegations from one complainant over events that date back 40 years.

One of the most prominent figures standing by Hawkes is Bob Rae, the former NDP premier of Ontario and former interim leader of the Liberal Party of Canada.

“He’s an enormously hard-working, decent and inspirational man,” Rae said Tuesday in an interview with CBC News. “He’s shown more courage and more guts on difficult issues in public life than anybody that I know.”

“I have no idea what happened or what didn’t happen and I’m not going to pre-judge that,” Rae said. “I have no intention of walking away from my friendship with him.”

Hawkes is senior pastor of Toronto’s Metropolitan Community Church, where he presided over Canada’s first same-sex marriage ceremonies in 2001.

“The outpouring of support for Brent has been absolutely unbelievable, by all the congregation,” said the chair of the church board, Anne Brayley.

“We have the highest regard for Brent. He’s a man of high integrity, he’s been a cherished and respected leader of our church for 38 years, and he has our full support.”

She said Hawkes remains in his position as senior pastor and she expects he will lead the service at the church next Sunday.

Charges date from the ’70s

Nova Scotia RCMP are giving few details about the circumstances that led to the charges against Hawkes.

“It’s a historical sexual assault investigation from the 1970s,” Const. Mark Skinner told CBC News. “At this time we only have one [alleged] victim that has come forward

“I am innocent of these allegations,” Hawkes said in a statement. “The purported events simply did not take place.”

The case is next due in court in April.

Hawkes is a member of the Order of Canada and officiated at the state funeral of the late NDP leader Jack Layton.

His 65th birthday party last June was a fundraising event for the church. Rae was one of the guest speakers, and video messages came from top Canadian politicians.

“You have lived the belief that Christianity is rooted in love and acceptance and you remind us that gay rights are human rights,” said Wynne in her birthday message to Hawkes.

“Happy birthday, my friend,” said Trudeau in his message to Hawkes. “I’m very happy to add my voice to the chorus of voices celebrating you today.”

Comedian Rick Mercer contributed a message as well. “The list of your life’s accomplishments is simply staggering,” he said. “You are a member of my personal gay hall of fame.” Ruby said his client was charged by the RCMP in December with indecent assault and gross indecency in Kings County, N.S. The incidents allegedly occurred in the 1970s.

The 65-year-old, who delivered the eulogy at former New Democratic Party leader Jack Layton’s 2011 funeral, has been the senior pastor at the Metropolitan Community Church of Toronto for nearly 40 years.

Hawkes is well-known in the LGBT community and has been recognized for his work by the City of Toronto, the United Nations Toronto Association, York University and the New Brunswick Human Rights Commission.

He was appointed to the Order of Canada in 2007 for his work in human rights and social justice in the LGBT community.

‘I am innocent,’ says Hawkes

In a statement posted to the Metropolitan Community Church website Monday, Hawkes denied the allegations.

“I want to be crystal clear: I am innocent of these allegations. The purported events simply did not take place. While it is impossible for me to understand where these almost 40-year-old accusations come from, I have a faith that will sustain me as well as faith in Canada’s justice system.” 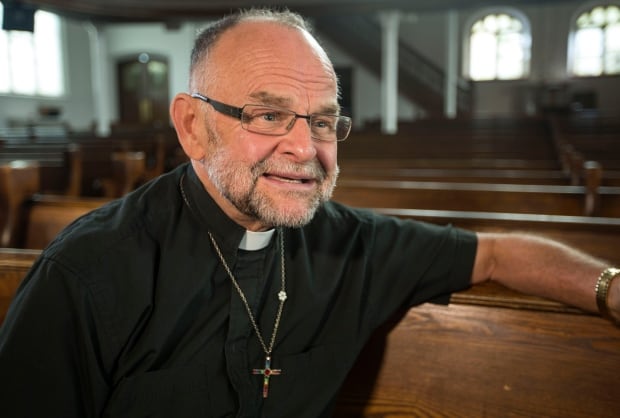 Rev. Brent Hawkes, of the Metropolitan Community Church in Toronto, has been charged with indecent assault and gross indecency in Nova Scotia. (Eric Foss/CBC)

Hawkes said he will fight the allegations “with all that I have.”

The board of the church also released a statement, saying, “Brent has our steadfast support.”

Ruby said he could not say much because the allegations are now before the courts. But he said in a statement that he is confident Hawkes will be “vindicated.”

Pastor of the Metropolitan Community Church of Toronto, a leader of gay rights movement, vows to fight allegations.

The openly gay pastor who performed the first same-sex marriages in Canada has been charged with sexually assaulting a male 40-odd years ago.

Brent Hawkes was summoned to court in Kentville, N.S., on Monday in relation to the assault that police allege occurred in the 1970s. He has been charged with offences from that era’s Criminal Code: indecent assault on a male and gross indecency.

The RCMP in Nova Scotia would not give any further details about the alleged crimes or age of the victim. The plea date was postponed until April 13.

Hawkes, who is a member of the Order of Canada, responded with a written statement, saying “I want to be crystal clear: I am innocent of these allegations. The purported events simply did not take place.”

His statement continued: “For 38 years, I have fought, with all that I have, for equality for my community. I have fought to give voice to those without voice.

“Now I will fight, with all that I have, these accusations. This time, however, my fight will be different; this time I will allow others to give voice for me.”

Hawkes, the senior pastor of the Metropolitan Community Church of Toronto, is being represented by well-known civil rights lawyer Clayton Ruby.

To call Hawkes a leader of the gay rights movement in Canada would be an understatement. He has spent much of his professional life speaking out against discrimination toward homosexuals.

He is perhaps best known for performing the first same-sex marriage ceremonies in 2001, four years before the Canadian government legalized gay marriage. (The marriages he performed were deemed legal in Ontario courts in 2003.)Hawkes wore a bulletproof vest under his vestments and was protected during the service by 12 bodyguards.

In another milestone for the country’s LGBT community, he officiated at the state funeral of Jack Layton in 2011. The federal NDP leader had always greeted him by asking about his husband, Hawkes said. Then Hawkes leaned down toward Stephen Harper in the front row of Roy Thomson Hall and said, “Hi, Canadian Prime Minister. How’s Laureen doing?”

Hawkes, 65, is married to John Sproule, a retired computer programmer. They have been together for 34 years.

Raised in New Brunswick, Hawkes came to Toronto in 1976 after noticing an ad for the Metropolitan Community Church of Toronto in the gay magazine The Advocate. By the next year, he was the church’s openly gay pastor and he has retained the position every since. The church is part of the Universal Fellowship of Metropolitan Community Churches and calls itself an inclusive church with roots in the LGBT community.

After police raided four gay Toronto bathhouses in 1981 and arrested more than 300 men in the largest mass arrest since the War Measures Act was invoked during the 1970 October Crisis, Hawkes went on a hunger strike to demand an inquiry.

His church was at the epicentre of the AIDS epidemic in the 1980s, with members of its congregation offering hospice care and Hawkes overseeing funeral ceremonies when many other churches refused.

On Monday, the church’s board released a statement supporting Hawkes. “The Board of MCC Toronto knows Rev. Hawkes as a man of high integrity and an inspirational community leader who has led MCC Toronto for 38 years in its quest for tolerance and inclusiveness,” the statement reads. “Brent has our steadfast support.”

The ancient vague crime of “gross indecency” was historically used to charge gay men for their sexual practices, according to University of Ottawa law professor Constance Backhouse. Before it was removed from the Criminal Code in 1985, it carried a five-year prison sentence.

The second charge, “indecent assault on a male,” carried a possible 10-year prison sentence and a whipping, before it was repealed in the early 1980s. (According to Backhouse, while whipping was still on the books, it had long fallen out of use.)

Rev. Brent Hawkes rides a in car during Toronto’s Pride Parade in 2015. The well-known Toronto pastor has been accused of sex crimes in Nova Scotia that date back four decades. (CP)

“I want to be crystal clear: I am innocent of these allegations,” Rev. Brent Hawkes said in a statement on the website of the Metropolitan Community Church of Toronto.

“The purported events simply did not take place. I will fight, with all that I have, these accusations.”

RCMP Staff Sgt. Craig Burnett said Monday that Hawkes has been charged with indecent assault and gross indecency related to allegations of a sexual assault in the 1970s.

Hawkes, 65, and a native of Bath, N.B., officiated over the state funeral for NDP leader Jack Layton in Toronto in August 2011, and has been a senior pastor at the Metropolitan Community Church for decades.

None of the allegations has been proven in court.

The church board said in a statement that Hawkes is a man of “high integrity and an inspirational community leader” and has “our steadfast support.”

Hawkes’ lawyer Clayton Ruby said he is confident his client will be vindicated.

“I have known Brent for more than a quarter century. I believe him, completely, when he tells me these accusations are false and that these events did not happen,” Ruby said in a statement.

The statement from church board said the alleged incident purportedly occurred prior to Brent becoming the church’s pastor, the charge is not made against MCC Toronto and that the church is not funding Hawkes’ legal defence.

1986: Master of Divinity, University of Toronto

2001: Doctor of Divinity, University of Toronto