MONTREAL—Priests and anyone else in “the orbit of the church” will be forbidden from being alone with children and other vulnerable people as part of a pilot project, the Roman Catholic archdiocese of Montreal said Thursday.

The goal is to create a “safety net” for everyone associated with the Catholic Church in Montreal, canon François Sarrazin said in an interview.

“Imagine if you are alone in a room and a child accuses you of hitting them, how will you react?” Sarrazin asked. “Whether it’s true or not, you need a witness. Not being in the room alone with someone who is vulnerable is simply being prudent.”

He said the policy will be introduced in a handful of churches across the city, starting in September.

For Carlo Tarini, a spokesman for an association of victims of priests, the new rules are “too little too late.”

He said the policy is just a way for the church to protect itself against lawsuits stemming from child-abuse scandals that have rocked the city’s diocese and the Roman Catholic Church across the globe.

The church “knows that victims have gotten help from lawyers and have been successful in court and they will push forward for compensation when such cases are made public,” Tarini said.

Recently, the Clerics of St-Viateur, a Catholic religious order that ran a school for deaf children in Montreal, was sued after 150 people came forward to say they were victims of child abuse at the boarding school between 1940 and the early ‘80s.

Between November and February, the order, along with a Quebec government-run health institute that took over the school, reached an out-of-court settlement with the plaintiffs for $30 million — reportedly the largest sum awarded to victims of a church sex-abuse scandal in Quebec.

Sarrazin said the policy doesn’t only apply to priests but to all employees of parishes and churches, volunteers and “anyone else in the orbit of the diocese.”

Archbishop of Montreal Christian Lépine said in a statement he will create a new bureau in the diocese called the “Service of Responsible Pastoral Ministry,” which will be tasked with rolling out the new policy.

Sarrazin said details will be made available at a later date.

Montreal priests to be prohibited from being alone with children 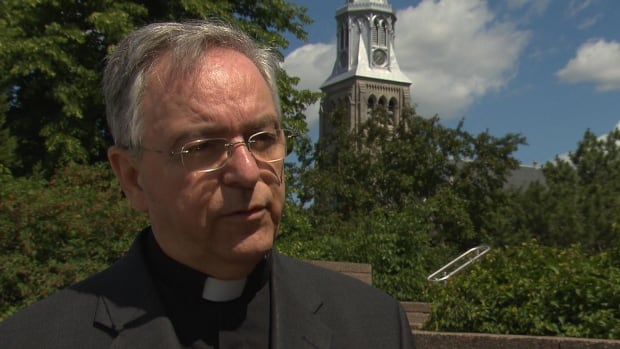 François Sarrazin, chancellor of the Montreal Archdiocese, says a pilot project to prevent priests and volunteers working with churches from being alone with children is about protecting victims and protecting the church. (CBC)

The Catholic Church of Montreal plans to bar priests, volunteers and all those involved in faith education from being alone with children.

François Sarrazin, chancellor of the Montreal Archdiocese, said a pilot project — to begin in 10 churches later this year — is a preventative measure and that churches in other provinces including Ontario have already implemented similar policies.

“It’s important that the church shows it’s making an effort and that our society can have confidence in the church and can say ‘they did their homework, now they’re credible,'” he said.

The pilot will involve French-speaking, English-speaking and parishes from various cultural communities that volunteer to participate and diocesan offices and services.

Sarrazin said it’s important to protect not just children, but all vulnerable people who seek out pastoral care, including the elderly.

The measure is part of a policy the archdiocese is calling “Responsible Pastoral Ministry.”

Sarrazin said while the church has been rocked in recent years by allegations of sexual abuse of children, those allegations aren’t always founded.

“To give [their story] importance, a child can give an account of an incident that isn’t always true,” he said.

For that reason, the policy is already in place, but in an unofficial capacity, Sarrazin said.

When asked to clarify the reasons behind the policy, Sarrazin named three.

Sarrazin told Radio-Canada a child would be accompanied by their parents for rites such as confession. The parents would be sitting further away, but would still be able to see their child.

Quebec’s Association of Victims of Priests calls the move too little, too late.

“This is damage control. The church has suffered a lot of flak because of its inaction about pedophile priests. But this is just a baby step. It needs to do an awful lot more,” said Carlo Tarini, a spokesman for the group.

John Zucchi, a professor in the department of history and classical studies at Montreal’s McGill University, said the pilot project is a first step.

“Many of these victims have a very painful past and suffered unjustly … I understand their frustration … The local diocese is going to take this one step at a time. If these guidelines are not enough, I’m sure there will be more action.”

He added that the Vatican will be watching closely.

“Historically, there have been people, religious people, who have called for safeguards — it’s come from the grassroots. But this time here in particular it’s coming from Rome — the Vatican, Pope Benedict and now Pope Francis who pushed for all types of safeguards. The dioceses around the world have been following on these indications from Rome.”

with files from Alison Northcott and Justin Hayward

Pierre Obendrauf/Postmedia News/FileChristian Lépine, archbishop of Montreal: “People who work in churches, if they hope to hide to commit acts of pedophilia, these people have no place in the service of the church.”

MONTREAL – Invoking past sexual abuse scandals and the need to create a “healthy and safe environment” in its churches, the Roman Catholic archdiocese of Montreal has announced new guidelines to ensure priests and lay workers are never alone with children.

“Recent events have brought to light the horrific reality of abuse of minors and vulnerable persons by members of the Church,” Christian Lépine, archbishop of Montreal, wrote in a message to the faithful dated Wednesday.

“These intolerable situations have shocked and shaken the Universal Church as well as the entire population to whom we wish to proclaim the Good News of Christ.”

A pilot project to begin this fall in 10 parishes and eventually extend to all 194 in Montreal will prohibit priests, staff and volunteers from being alone with minors. Following the lead of other organizations like amateur sport associations and the Scouts, the archdiocese will institute police screening of new hires and volunteers working with children or the vulnerable.

François Sarrazin, chancellor of the archdiocese, said the measures are intended to send a message.

“People who work in churches, if they hope to hide to commit acts of pedophilia, these people have no place in the service of the church,” he said.

Simple human prudence dictates that you don’t remain alone with a child.

The archdiocese is drawing on similar projects in Ontario and New Brunswick, he said.

In Bathurst, N.B., for example, the 2015 diocesan policy for responsible pastoral ministries states: “Members of the clergy, pastoral agents, employees or volunteers must avoid being alone in a closed area with a minor, unless there is another screened adult or the minor’s parents/guardians close by.”

It is a far cry from the days when Sarrazin, 67, was a boy entering the confessional booth with his heart beating and the priest on other side of the screen. These days, he said, when priests meet children, it may be out of earshot but it is always in full view of another adult.

In an interview with the Journal de Montréal, the archbishop called sexual abuse that occurred within the church “an unspeakable tragedy,” but said the institution has evolved.

“At one time, it was thought that (pedophilia) did not exist,” he said. “At another, it was thought to be curable, and priests were given a therapy session before being sent back to their ministry. Today, we know it exists, and we have to act.”

For Sébastien Richard, spokesman for a Quebec association of victims abused by priests, the new measures announced by the archdiocese are worthy, but they arrive too late.

With church attendance in steep decline, priests are an endangered species, he said. The potential for abuse is reduced simply by their dwindling numbers and by the fact they are no longer teaching in schools.

If the archbishop truly believes in addressing the “unspeakable tragedy” of past abuse, the church should stop invoking prescription – that too much time has passed since alleged events occurred — when facing civil suits from abuse victims, Richard said.

“Right now, there are hundreds, even thousands of victims of childhood sexual abuse, committed by priests and clergy, who are denied justice because the Catholic Church insists on invoking prescription so as to not have to compensate the victims,” he said.

Montreal priests no longer allowed being alone with children

The Archbishop of Montreal is going to implement a pilot project this fall in hopes of cleaning up the reputation of the Catholic Church.

In an interview with the Journal de Montreal, Archbishop Christian Lépine said that Montreal priests will be barred from being alone with a child in order to prevent any opportunity for paedophilic acts.

Bishop Lépine said there will be a pilot project this fall in 10 parishes that could eventually be expanded island wide.

The Archbishop is also looking to prevent any possible situations of breach of trust by prohibiting Church employees from receiving personal gifts.