Hundreds of suspected British paedophiles are still at large, nearly two years after they were named by Canadian detectives.

The list of suspects was put together in Toronto as part of a sweeping child pornography investigation named Project Spade.

The Brits were allegedly customers of a Canadian firm that sold child pornography videos.

The investigation has led to the rescue of 386 young children around the world and the arrest of 348 people, but none of them have been Brits.

The suspects are feared to include teachers, priests and foster carers.

Toronto detective Paul Krawczyk said his team passed ‘hundreds of names’ to the UK 18 months ago.

The newly formed National Crime Agency admitted no arrests had been made and told The Mirror: ‘In 2012 CEOP received information from the Toronto Police. It receives around 19,000 such referrals every year. The NCA is using the information for intelligence purposes and continues to develop it. There have been no arrests to date.’

‘It is alleged that officers seized hundreds of thousands of videos detailing horrific sexual acts against very young children, some of the worst that they have ever viewed,’ Toronto Inspector Joanna Beaven-Desjardins said.

Police said 108 people were arrested in Canada, 76 in the U.S and 164 in countries from Spain to South Africa and Australia.

Forty school teachers, nine doctors and nurses, and more than 30 people who volunteered with kids were among those taken into custody.

Police said the children were ‘rescued from child exploitation’ but did not give more details.

Beaven-Desjardins said the investigation began with a Toronto man accused of running a company since 2005 that distributed child pornography videos to the tune of $4million in revenue, CTV News reported.

Police allege Brian Way, 42, instructed people around the world to create the videos of children ranging from 5 to 12 years of age, then distributed the videos via his company, Azov Films, to international customers.

The videos included naked boys from Germany, Romania and Ukraine, which it marketed as naturist movies and claimed were legal in Canada and the United States.

The head of the Toronto police sex crimes unit told the Toronto Star that the X-rated images displayed ‘horrific acts of sexual abuse — some of the worst (officers) have seen.’

Police said they executed a search warrant at Way’s company and home, seizing about 1,000 pieces of evidence: computers, servers, DVD burners, a video editing suite and hundreds of movies.

Way was charged with 24 offences, including child pornography. Police also designated Azov Films as a criminal organization, charging Way with giving directions on behalf of a gang.

Beaven-Desjardins said this is the first time in Canada that anyone as been charged with being a part of a criminal organization in regards to child pornography.

Police said they began their investigation in 2010 and worked with Interpol in more than 50 countries including Australia, Spain, Mexico, Norway and Greece.

More than 350,000 images and over 9,000 videos  – about 45 terabytes – of child sexual abuse were found during the probe, and arrests are continuing, Beaven-Desjardins said.

‘This operation shows that international police cooperation works. Despite large amounts of material and that this is time-consuming work, this shows that the Internet is not a safe haven for crimes against children,’ Norwegian police spokesman Bjoern-Erik Ludvigsen said in a statement.

The U.S. Postal Inspection Service said it began its investigation by accessing the company website and making undercover purchases.

People making the images included a youth baseball coach in Washington state who made more than 500 films and a school employee in Georgia who put a camera in a student washroom to videotape images of students’ genitals, U.S. Postal Inspection Service inspector Gerald O’Farrell said.

Beaven-Desjardins said the investigation is ongoing and believes more arrests will be made. 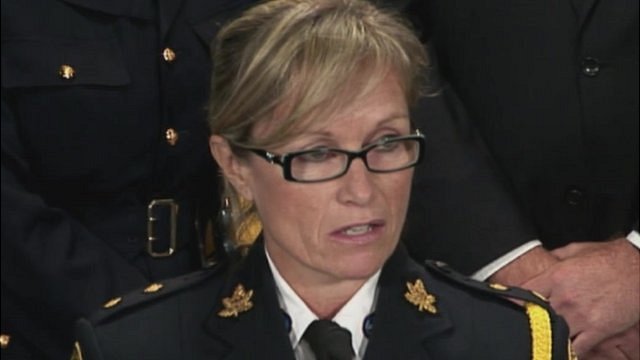 Inspector Joanna Beavan-Desjardins said 108 arrests were made across Canada

Police in Canada say 348 people have been arrested and nearly 400 children rescued during a three-year investigation into child pornography.

At the centre of the inquiry was a Toronto-based firm that allegedly sold DVDs and streamed videos of naked children.

Azov Films marketed the footage as “naturist” and claimed it was legal in Canada and the US.

The films were distributed in 94 countries, police said.

In Canada 108 arrests were made, with another 76 in the US and 164 in other countries during the investigation codenamed Project Spade.

Inspector Joanna Beavan-Desjardins, from Toronto police, said the number of suspects who had close contact with children was of particular concern to investigators.

Doctors, school teachers, foster carers and priests were among those detained, she said.

The head of Azov Films, identified as Canadian Brian Way, 42, has been in custody since his arrest in May 2011, following an undercover operation.

He is accused of paying people to film the children and has been charged with 11 offences.

The company has been shut down.

US investigators then joined the inquiry because many of the films were being exported to addresses in America. Seven months later, a series of raids took place across Toronto, including at a site owned by Azov Films and Brian Way, police said.

Among the other countries involved in the investigation were Australia, Spain, Mexico, South Africa, Norway, Greece and the Republic of Ireland.

“It is alleged that officers located hundreds of thousands of images and videos detailing horrific sexual acts against very young children – some of the worst they have ever viewed,” police told reporters.

Ms Beavan-Desjardins said that Canadian officers, executing a search warrant at the home of a retired school teacher, found over 350,000 images and 9,000 videos depicting child abuse, with some of the victims known to the man.

He was also charged with sexually abusing a young child relative, she said.

Gerald O’Farrell, Acting Deputy Chief Inspector of the US Postal Inspection Service, said all the victims identified were pre-pubescent, with some as young as five years old.

Mr O’Farrell detailed the cases of several US residents investigated as part of Project Spade, who have already pleaded guilty to crimes.

A school employee from Georgia, who had admitted receiving child pornography, had placed a hidden video camera in the toilets used by school students, the inspector said.

A pre-school teacher had pleaded guilty to producing child pornography while teaching in Japan, he said.

Mr O’Farrell said US postal inspectors had identified and rescued 330 child victims as part of the investigation.

Toronto police acknowledged the assistance of a website, cybertip.ca, which allows for the online reporting of the sexual exploitation of children.

The website had received many complaints about Azov Films which became the basis for the investigation, TPS said.‪

You’ve shared laughs, locker-rooms and trophies over 20 years of hockey and friendship with a guy — after two decades, you’d guess you’ve gotten to know your buddy pretty well.

But then police ask if the same man has also shared private time with your kids.

As your stomach turns, you realize you hardly knew the guy at all.

“I just about threw up when I found out,” said John.

“We knew him as well as you know anyone — they’ve asked everyone with kids. The whole thing is terrible.”

John, his name changed to protect his children, is just one Calgary parent left reeling in the wake of one of the largest child pornography rings Canadian police have ever seen.

Two Calgarians are among the 341 global arrests in Project Spade, an investigation centred on a Toronto man who police accuse of running an international child-porn distribution company.

As well as arrests in 50 countries, police say they rescued 368 children connected to film and photos sold by the Toronto company, which investigators accuse of distributing “horrific images” of “terrible acts” against kids.

For the ICE team, it’s been a case of going to friends and family surrounding the two men, and asking about their association with children.

“He was really well known by a lot of people,” said John, who counted Owad as a friend. His kids, thankfully, were never alone with the suspect.

“We’re all disgusted — we knew him for 20 years, and he never had a woman, but we just assumed he was gay. Apparently we were wrong.”

Others arrested in the bust, which included Ontario, Canada, the U.S., Spain, Mexico and Australia, had direct contact with children — but so far, police don’t believe either Owad or Gerbrandt regularly interacted with kids.

“We would have indicated if there was anything like that, but there’s nothing,” said Staff Sgt. John Guigon, of the Southern Internet Child Exploitation (ICE) Unit.

Gerbrandt was last employed at a grocery store, while Owad once worked with the Calgary Flames — but the police investigation ended that.

“In 2011, upon being advised by Calgary Police Services of the investigations and significant allegations, he was immediately suspended and we have had no contact since.”

“Customers — that hits the nail on the head,” he said.

With 50 of the arrests taking place in Ontario, it would appear Alberta was a minor player in the sordid affair, with only three suspects charged in the province — including Andrew Liu, a 66-year-old former math professor from the University of Alberta.

“It’s no less an issue in Calgary than in Toronto — without a word of exaggeration, at any given moment day or night in southern Alberta, there are a thousand people online actively trading in child pornography,” said Guigon.

Building a case with sufficient evidence requires a huge commitment of time and resources, and in the case of Project Spade, Toronto Police have been building their case for three years.

Inspector Joanna Beaven-Desjardins, head of Toronto’s Sex Crimes Unit, said the investigation was launched in 2010 after officers made contact with a man on the Internet who was sharing graphic images of young children being sexually abused.

“The officers were able to trace the Internet connection to a male living in Toronto who was running an exploitation movie production and distribution company from an address in the city,” she said.