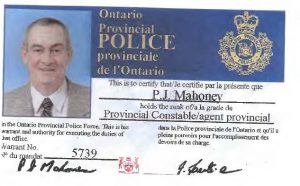 My name is Geraldine Mahoney (Hatfield). It has taken me many years to find the fortitude and courage to speak up, and tell my story. My late friend and husband Pat (Patty) lived a very short life, all the while tormented with shame and guilt because of his treatment at the hands of Father Henry Maloney of Bancroft [Father Hank].  As a result of this treatment, myself and our children (Nancy, Kelly, and Katherine) lived our own life of grief and torment, watching our husband and father resort to bouts of drinking, depression, and in some cases acute and unreasoning rage. Patty was taken from us way too early, at the age of 54.

Patty was born on Friday Mar. 13/53 at Bancroft Red Cross Hospital to parents Tom and Edna (Kelly). Patty was the first-born to Tom and Edna, and came into a household that included his grandfather Henry and his grandmother Bridget (bedridden from a stroke). Also in the home was his Aunt Sheila Mahoney who was mentally incapacitated as a result of meningitis.

Patty’s brother Michael was born June 29/1954, followed by Anne on Aug. 31/55. Anne died 5 days following her birth. Colleen was born on Dec. 13/56. Throughout these short years, Father Maloney was at the house regularly for visits and meals.

The Mahoney’s operated the corner grocery store near North Hastings High School. When they sold the business, Tom became the security guard at the local uranium mine, and Henry became the full-time custodian at Our Lady of Mercy School. The kids in the school (including Patty) helped Henry do his work. Henry was always affectionately referred to as “Gramps”. Patty was very close to his grandfather, and spent hours working on engines, fishing, etc. Patty had a close circle of friends from this time at OLM including Gord, Marc, Bill, Al, Paul, Dale, Jerry, and Wayne.

Patty became an altar server in 1962 at Our Lady of Mercy church in Bancroft. In 1965, (at the age of 12) he began driving Father Hank to Haliburton on Sundays to say mass. This is when Patty’s nightmare began. (I first found out about this early in 1974, just a couple of years after Patty and I started dating)

It started at the old Italian lady’s house in Haliburton. Father Hank would always go to her house after Mass in Haliburton for a big dinner and red wine. Patty said the meals were wonderful and very filling. Then Father Hank would take him upstairs to the day bed for a “nap.” Patty had to hug him and kiss him before the “nap.” Then came kisses on the neck, back, shoulders, and around his ears. Over the next year, Patty learned to lay with his back toward Maloney, offering some protection at the time.

At this point in his life, Patty told me that he had absolutely no confidence in himself, and felt that he was ugly, and repulsive looking. He decided to take up wrestling and weight-lifting at high school. After gaining a tremendous upper-body strength, and learning some basic wrestling holds he was finally able to put Maloney in his place, and the sexual abuse came to a stop, although Maloney continued to try to intimidate him by putting him on the church schedule to serve and do readings.

I met my Patty in 1972, through Randy Armstrong. Randy and Patty were good friends, and they were both still at North Hastings High School. By this time I had moved to Bancroft and was working in the Red Cross Hospital.

Patty and I were married in 1976. Through the next 3 years Patty began telling me about his abuse at the hands of Maloney. He recalled very often having to drive “Father Hank” to visit his sister Nell, or his famous brother Arthur in Toronto. When I suggested to Patty that he should tell the police or go see a lawyer, Patty would say “No, leave it be. The old bastard will get his when he dies.”  Patty continued to work for Jerry at the local IGA up until 1979.

I recall asking my Dad how Patty could go about getting his GED. My Dad took him out the next morning, he did the test and passed with flying colours.  A month later, Patty applied to the Ontario Provincial Police, was accepted, did his training, and was on the job in 6 months.

He continued his career with postings in Sudbury, Moosonee, Sharbot Lake, Belleville, Napanee and finally in Kaladar.

Throughout these years, I always noticed that Patty was EXTREMELY protective of his daughters. I started to catch on that he was afraid that the same thing that happened to him could happen to them as well. There were many happy times, but there were also many very dark and troubling times.

Patty was taken from us on January 25/2008 at the age of 54. He had lived life to the fullest, but he had also lived a life of torment, fear and guilt because of the monster Henry Maloney. The baggage Patty (and all of us) lived with was a contributing factor to Patty’s early death I am sure. We miss him so much – it has left an empty chair in our home!

His short life was fraught with sexual insecurities, guilt, shame, and torment and as a result of that we (myself and the girls) lived with it as well.  Maloney left this as his legacy.
I know that there are many other men who have been abused by Maloney. I wish and hope that they can get up the courage to speak up, and deal with it. I don’t want any other families to go through what we have, so please speak up and lighten your burden.
I am beyond disgusted that the Roman Catholic Church employed a sick monster like Henry Maloney as a priest. And now I am seeing that Maloney was just one of many. It’s like a contagious disease that has spread all over the world. Can it be stopped?