Has been charged twice.  Guilty plea to indecent assault of a female in Marselin, Saskatchewan.  Sentenced to six months in jail and one year probation.

June 2017:  another complainant has come forward.

October 2017:  Two charges of gross indecency and two of indecent assault on a male person laid in relation to allegations of sex abuse  in Saskatoon and Gravelbourg, Saskatchewan dating to in 1974-1975

04 December 2017:  said to have suffered a heart attack over the weekend – Winnipeg court date of today remanded to 18 December ’17

2011:  has served as chaplain at St. Boniface hospital in Winnipeg Manitoba for 24 years

– sexually abused a 10-year-old girl in summer of 1978 in Marselin, Saskatchewan (later convicted)

charges laid Oct. 2017 in relation to allegations of sex abuse  which transpired in Saskatoon and Gravelbourg between 1974-1975 (M)

1966-1968:  taught at College Mathieu, Gravelbourg, Saskatchewan (S) At that time the college was a boarding school operated and largely staffed by the Oblates of Mary Immaculate.  In 1970 the school began to admit females.  The school became a lay institution in 1976.  (P)

07 September 1958:  ORDAINED as an Oblate priest,  Marselin, Saskatchewan (Marselin was then part of Diocese of Gravelbourg, Saskatchewan)

The longtime chaplain at St. Boniface Hospital has abruptly retired after being charged with a historical sexual abuse case in Saskatchewan.

Father Omer Desjardins, 82, announced he was leaving his post last month, but provided no explanation for the sudden decision. Weeks later, colleagues learned Desjardins had been arrested following a lengthy RCMP investigation.

“We were just made aware about the charges after he retired,” hospital spokeswoman Hélène Vrignon told the Free Press Friday.

Court records show Desjardins is accused of molesting a 12-year-old girl on one occasion in 1978 in a small community north of Saskatoon. He is facing a charge of indecent assault. Desjardins has made one court appearance and is set to resolve the matter when he appears on Oct. 23.

The now-adult victim only came forward to police earlier this year — a decision her mother says came as a result of numerous difficulties in her life, including a deep depression.

“It’s just all very sad,” the mother told the Free Press on Friday. She said her daughter spoke up immediately following the abuse, but was convinced by family members, including the mother herself, to stay silent.

“Nobody in those days reported anything. It just wasn’t done,” she said. “And back then, priests were put on a pretty high pedestal.”

The Free Press is not revealing how the victim knew Desjardins to avoid potentially identifying her.

Desjardins was ordained in 1958 and has spent much of his career working in Manitoba, with stints at churches in St. Norbert, St. François Xavier and Sacred Heart Roman Catholic Church in Winnipeg.

He became the chaplain at St. Boniface Hospital in 1988 following a two-year stint at the Misericordia. Vrignon said there are no other investigations ongoing as far as she knows.

Desjardins has continued living in Winnipeg free on bail since his arrest with strict conditions including having no contact with the victim or any children under the age of 16.

Republished from the Winnipeg Free Press print edition October 18, 2014 A12

An 83-yearold Catholic priest has been charged with indecent assault dating back to the 1970s in a small community north of Saskatoon.

Omer Desjardins is alleged to have committed the offence against a female in 1978. The StarPhoenix is not naming the community where the charge originates to protect the identity of the complainant.

The charge of indecent assault was subsequently replaced in the Criminal Code of Canada with sexual assault.

Desjardins currently lives in Manitoba, where he continues to practise as a priest and works in spiritual care at the Saint Boniface Hospital in Winnipeg.

When reached by phone, Desjardins declined to comment on the charge and said that he would contact his lawyer. His first appearance in court was last week. His case was adjourned to Oct. 2.

ANNIVERSARY OF THE GATHERING OF FRANCOPHONE SASKATCHEWAN

This November 10, Father Omer Desjardins and Father Jean-Paul Isabelle took part in the 100th anniversary celebration of the gathering of French-speaking Saskatchewan. Father Desjardins gave a speech which reminded the hearers of the important role played by the Oblates in promoting the French language in Saskatchewan. In the name of the Oblates of Western Canada, he also thanked the Francophone Community Assembly (FCA) for having acknowledged and honored the Oblates of Mary Immaculate for their role in promoting the French language in Saskatchewan.

The Oblate Community boasts of many unique characters. Our Omer must hold the recent record for the longest apostolate in one location in our recent times. He has been the Catholic chaplain at the St. Boniface Hospital for the past twenty four years. Thoughtfully he responds to the question about his ministry. “This is the ministry I felt most comfortable with. There is a sense of being needed and of responding to real needs.” There is a moment of silent reflection. “This is ministering to the poor. I find that people in the hospital are poor people.” He continues to fill out his response. “This is life giving ministry.”

When asked how long he will continue as hospital chaplain he chuckles. “I am not thinking of retiring. I plan on continuing as long as my health allows me.” At this point in time he is working only half time but sees a future in continuing. “It is important for me to continue in this ministry.”

Another part of his ministry is his volunteer work with refugees and new immigrants. He became involved through Brother Duchene. “Through him I got to know a few families and from there it snowballed. I help the refugees in very simple ways. I drive them to and help them to get registered at the food bank. Mostly the refugees are from Burma. They are Karen which is a distinct culture and language group. They are opposed to the military regime in Burma. These refugees have spent many years in refugee camps. They are faith filled Christians, most of a Evangelical persuarsion.

“I am also involved with immigrants from the Congo. I help them obtain furniture and household goods from Florien Laurent here in St. Boniface. Or we go shopping at Le Market which has some very reasonably priced household goods.”

This is very much Oblate work. “I am responding to their need. They are just learning the language. They are very grateful people and they are very positive in their thinking. Their children laugh a lot. There is a wholeness about these people.”

Omer is never at a loss for things to do. He has a very impressive collection of fine wood working that he had made in shop. He is very grateful for his good health and list many major hiking and backpacking expeditions. He has hiked the West Coast Trail on Vancouver Island four times; once he hiked the Chilkoot Trail in the Yukon, the Grand Canyon in Arizona and the John Muier trail in California but the most difficult hiking was the Coastal Trail along Lake Superior (2005) which proved to be a real wilderness trail. “But we made it!”

He always carries his trusty camera along the trail as the photos in the hallway indicate. His annual photo albums dating from 1979 highlight his interest in recording the beauty and challenge of nature. Not to consider slowing down for a man of his age, Omer is planning a weekend hike in the Whiteshell (wilderness area north and East of Winnipeg). He includes some of the refugee young men on these hikes. These young men must live in the roughest part of the city due to a very tight shortage of cash and they enjoy the outdoors so much. Omer is impressed at their youth and how they can climb the trees and the rocks.

“It is out here that we sing the hymn to creation that we pray every Sunday morning in our breviary.”
When I asked Omer to give a summary of his Oblate life he rubbed his chin and slowly responded. “Everything comes down to love. It may be an overstatement but God is love. Where there is love, there is care and the results of love are in service.”

College Mathieu and the Beginnings of Octopus 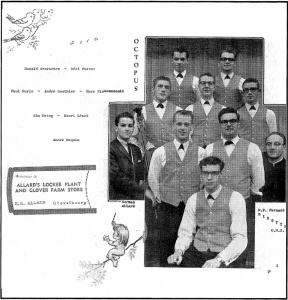 The first members of Octopus in 1964, under the direction of Father Fernand Binette, OMI.

In 1963, Father Fernand Binette, OMI, selected the eight best adult male voices from the College Mathieu Choir to form a new group, Octopus and it went on to make its mark in the province. The original group was made up of Réal Forest, André Gauthier, Henri Léost, Henri Lepage, Denis L’Heureux, André Moquin and Paul Morin, all from Gravelbourg, and Léo Pinel, from Moose Jaw. “Many Fransaskois and […] former College Mathieu students can remember hearing the musical group, Octopus […]. The group specializes in a capella music, folk songs and popular music.” (NOTE 3) Accompanied by Father Omer Desjardins, OMI, on piano, the group performed for many years, with new singers replacing those who left. Three former College students, Réal Forest, Henri Lepage and André Moquin, were members of the group for the entire period of its existence. After the release of its only CD in 2006, having served as the principal ambassadors of Fransaskois singing for more than 45 years, the group decided to retire and make way for other singers and groups.

In the fall of 1971, a former student, Donald Sirois, returned to College Mathieu and he began the MAT, thus founding an institution that would become as well-known as Octopus. Surrounded initially by talented students like Gerry Pittet, Phillip Fournier, Solange Campagne and Julien Poulin, Sirois was able to create a training ground for future Fransaskois singers and musicians. Several other members of the Campagne family (Paul, Carmen, Annette and Michelle) followed their sister Solange as members of the MAT, and their older sister, Suzanne, was its director for a few years at the end of the 1970s (NOTE 4). Numerous other musicians and singers, like Andrée Noonan, Lisa Hounjet (Leezjah), Cathy Chouinard (Clemonica) and Charles Dumont, began their careers with the MAT. While the MAT still exists, College Mathieu is no longer what it was, with a high school enrolment of only 25 students (2009 figures). As a result, the group is no longer as dynamic as when there were 150 or 200 students at the Collège.