Robert Couture enjoyed taking in Broadway shows, jet-setting in Europe and driving his Cadillac — and he did it all on a meagre priest’s salary.

“He was also keeping a secret,” Meehan said Tuesday during his opening remarks at the former priest’s criminal trial. “He was stealing significant sums of money that didn’t belong to him.”

Couture is charged with one count of theft over $5,000. When police charged him in 2013 after a two-year investigation, they said he stole more than $180,000 from Ste. Anne Parish in Tecumseh. The trial is expected to take three weeks.

Couture is accused of pilfering money from donation plates, candle boxes, a church bank account and other sources between 2002 and 2010.

Meehan called Couture’s alleged actions an “abuse of the power he held.”

“He was the pastor, what he said went.”

Couture brazenly acted out large portions of his crime in plain view, the prosecutor said.

“He did it out of an apparent sense of entitlement,” said Meehan, who plans to call about 18 witnesses.

Meehan said Couture wore expensive clothes and “enjoyed fine dining.” He was also a “prolific traveller.” Meehan said the former priest took in Broadway shows in New York, and travelled to Jamaica, Europe and Disney World. He also put down $26,500 in cash for a Cadillac.

While still in his 40s, said Meehan, Couture “boldly told his priest colleagues ‘I now have enough money to retire.’”

Meehan said some of the thefts were small-scale. Couture allegedly took money from candle boxes and donation plates. But there were also some large-scale schemes. Meehan said Couture created a “bogus” TD bank account in Ste. Anne’s name that only he had access to. Meehan said the priest deposited thousands of dollars worth of the church’s money, including a parishioner’s bequest.

Meehan said Couture set up a “de facto fee system for sacraments” and kept most of the mass stipends for himself. He also allegedly ordered staff to set aside the collection each week from the 4 p.m. Saturday mass.

Another scheme, said Meehan, was telling funeral homes there was a $260 fee for prayer teams at funerals. Meehan said Couture would take the cheques and only hand over $120 or $140 to the church.

The prosecution’s first witness Tuesday was Geralyn Ann Cote, a retired parish secretary. She said one her duties was to come in Monday morning, take the donation money out of the safe and count it. But at some point, Cote said, she would show up at work and the money envelopes were already out on a table.

“I just thought it was unusual that he was doing that,” said Cote, adding there was a rule that the priest doesn’t touch the money.

She said some of the bills had been “switched up” into different denominations. Couture would take cheques or $50 and $100 bills and switch them for smaller bills, said Cote. He did this “every week.”

“He would confuse my counters because sometimes it didn’t match up,” said Cote.

She said one of the money counters eventually noticed the amount of donations had dropped. Cote said that when she mentioned the comment to Couture, he told her to fire the counter. She said she didn’t fire the person and that was the end of the issue.

Cheryl Senay, the current church secretary and bookkeeper, testified she also thought some of Couture’s orders were strange. She said that when the Windsor Symphony or Elections Canada rented the church or its hall, she was told to hand over those cheques to Couture instead of putting them into the church’s regular bank account.

She also echoed Cote’s testimony about coming in Monday mornings to find the donation envelopes out on a table.

“That’s not supposed to happen,” she said.

“The priest isn’t supposed to have any dealings with the money.” 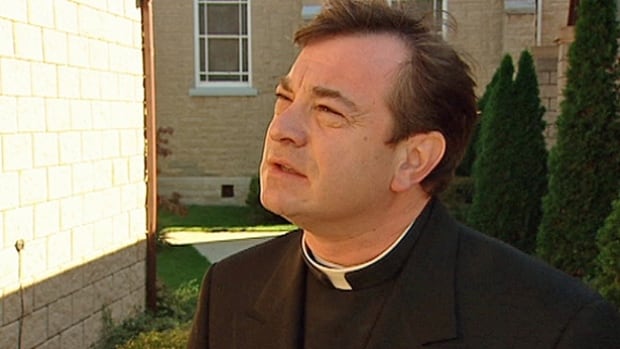 The Crown alleges Robert Couture stole from collection plates when he was a priest at Ste. Anne Parish in Tecumseh, Ont. Couture’s trial opened in Windsor, Ont. (CBC File Photo)

A southern Ontario Catholic priest embezzled more than $150,000 and used it to fund a lavish lifestyle that included trips to Europe, New York, Disney theme parks and fine dining, the Crown said to open the trial of Robert Couture.

Robert Couture was Ste. Anne Parish’s priest in Tecumseh, just east of Windsor, when he was charged with one count of theft over $5,000 nearly two years ago.

Provincial police claim an audit of the parish’s accounts revealed at least $169,000 in irregularities.

His three-week trial began in a Superior Court of Justice courtroom in Windsor on Tuesday.

Couture is alleged to have stolen money in a number of ways.

The Crown claims he stole from collection plates and told funeral homes they had to pay $260 for “prayer teams” to come to funerals. It’s alleged Couture would then give the church cheques for only $125 to $140, and pocket the rest.

In opening remarks, Crown prosecutor Tom Meehan told the jury that Couture opened a bank account in the name of the parish, but only he had access to it.

Justice S. K. Campbell is presiding over the case.

Police say officials from the parish first contacted them in August 2011, regarding an alleged internal theft that occurred between 2002 and 2010.

The parish then asked KPMG to carry out a forensic audit, which took two years and found thousands of dollars in “missing funds,” prompting the parish to contact police.

3 Responses to “Trials begins for former Catholic priest accused of stealing $180,000 from his church” & related article