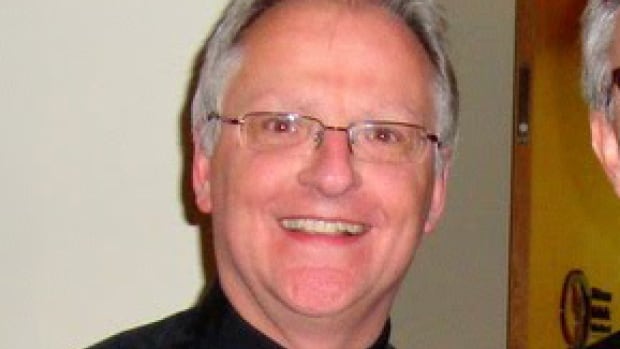 Stephen Amesse, seen here in a photo posted on a blog in 2009, has been found not guilty of sexual assault and sexual interference involving a boy in 2008. (From Archbishop Terrence Prendergast’s blog)

An Ottawa courtroom erupted in cheering and applause Tuesday when a judge found an Ottawa priest not guilty of sexually assaulting a then 14-year-old boy in 2008.

“This is not a cheering section,” Justice Martin James cautioned the dozens of people gathered to support Stephen Amesse, who in 2014 was charged with several counts of sexual assault and sexual interference involving a child under 16.

Amesse had so many supporters there that, just before the verdict was read, Crown attorney Fara Rupert had to clear some space for the complainant’s family to sit.

James told court Amesse met the boy — who cannot be identified — at Guardian Angels School, which is part of the Holy Spirit Parish in Stittsville, when the boy was in Grade 5.

Court heard the boy was big for his age, had been diagnosed with attention deficit hyperactivity disorder and had problems with the other children. Their family was active in the church and attended mass regularly.

The charges against Amesse related to two alleged incidents, including one at Amesse’s house. The boy had wanted to dig for historical artifacts behind Amesse’s house on a warm day, James told court.

In the boy’s version of the incident, James said, Amesse asked him if he wanted to have a shower after the digging. The boy agreed, and after, while the boy was wearing only a towel, Amesse came into the bathroom and showed him how to use a body hair shaver he had bought the boy as a gift. The boy said he took his towel off and that Amesse touched his genitals while using the shaver.

The boy alleged Amesse then gave him a 10-minute shoulder massage while the boy’s shirt was off and shorts were on. The boy’s father remembered him coming home with soaking wet hair, James added.

Amesse, meanwhile, said the boy did come over and did get a shaver for his interest in bodybuilding, but said the boy never took a shower. Amesse claimed he never gave the boy a massage or showed him how to use the shaver.

The second incident was alleged to have taken place at the rectory, James told court. The boy said he was sitting in a chair and got a shoulder massage from the priest after Amesse had given him some brandy.

In the end, James told court he was unable to determine conclusively what was truthful and what was not, and found the Crown had failed to prove its case against Amesse beyond a reasonable doubt.

James pointed out several inconsistencies between what the complainant testified during the trial and what he told police when he came forward, including how much money was contained in birthday and Christmas cards he received from Amesse — Amesse said it was always $50 bills, while the boy gave several amounts, the highest being $500 — how many times Amesse was alleged to have given him brandy, and more.

Some of the boy’s relatives cried after the verdict was read out and expressed shock at the cheers and applause. Amesse and defence lawyer Bob Carew, meanwhile, shook hands with some of the people gathered in the courtroom.

Son did ‘what was right,’ father says

“Despite the verdict [our son] has done what was right,” the victim’s father told reporters outside the courtroom after the verdict was read.

“We’re just glad the public is aware now,” he added.

Amesse was 56 when he was arrested in December 2014 following a police investigation that began in February that year, when the complainant was 19 years old.

“I just want everyone to know that I forgive my accuser,” Amesse said outside the courtroom Tuesday, his voice breaking.

Amesse was suspended from all ministry and his position as pastor at St. Patrick’s Catholic Church in Fallowfield after he was charged in 2014, his archdiocese said at the time.