I believe the correct name is Thomas Archbold

Lawsuit filed alleging abuse dating between 1937 and 1942 by Father Ernest Archibald and Sister Clara at “the Vogar Church Day School” :

From what I can find, it seems that the school in Vogar was utilized by Catholics for church services until some sort of dispute arose.  Subsequently a Roman Catholic Church was built and, in 1939, was dedicated  to Saint Francis of Assisi:

From what I can sort out, both the church and school served the Metis population at the Dog Creek Reserve.

I must say this  is difficult to sort out.  The school referenced in the article below seems to have been  on the site of what  is now known as the  St. Francis Roman Catholic Church, Vogar Manitoba.  According to the picture below (scroll down), the church dates to 1928 and is listed as an historic site in Manitoba.  According to 26 November 1939 article, the church in Vogar was erected and blessed as a separate entity in 1939.

Warning: Story contains graphic content that may be disturbing 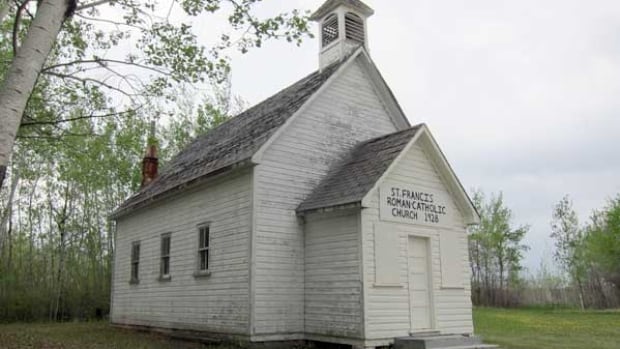 The plaintiff’s lawyer said the plaintiff identified this church at Vogar as the location of the school where the alleged abuse occurred more than 70 years ago. (Gordon Goldsborough/Manitoba Historical Society)

A Métis man alleges he was physically and sexually abused by a Catholic priest and a nun at the Vogar church school in Manitoba’s Interlake region more than 70 years ago.

The allegations are in a lawsuit filed last week in Manitoba Court of Queen’s Bench naming the Roman Catholic Archdiocese of Winnipeg, the order of nuns Les Oblats de Marie Immaculée du Manitoba, the province of Manitoba, as well as the priest and the nun.

“The plaintiff states that he did not complain to his parents or any authorities because his grandmother was the head of the family and she said he needed to be a good Catholic,” the claim said.

It is believed the priest and nun accused in the case are no longer alive, according to the lawsuit. The nun was a teacher at the Vogar church school in the R.M. of Siglunes from 1937 to 1942 when the incidents are alleged to have occurred, the lawsuit said.

According to the claim, the nun “pulled the plaintiff by the ears and hair and gave him the strap in front of other children.”

She also pulled up her dress and exposed her “vaginal area” to the plaintiff and physically assaulted him with a strap on about four or five occasions, the claim said.

The plaintiff’s lawyer Israel Ludwig said the passage of time and the effects of trauma from abuse can often make it difficult for plaintiffs to testify.

“This man was so badly scarred psychologically, that even though I began interviewing him about this case well over a year ago, it really wasn’t until about a month ago when I was finalizing the claim that he actually broke down and told me about the worst of it,” Ludwig said.

The plaintiff, now in his 80s, suffered a number of psychological problems because of the alleged abuse, the claim said, including anxiety, aggression, depression, nightmares and a loss of self-esteem.

The Roman Catholic Archdiocese of Winnipeg told CBC News it has not yet received the claim but would be unable to comment because the matter is before the courts.

Neither the Oblats de Marie Immaculée du Manitoba nor the province has been served with the claim yet either.

A spokesperson for Manitoba Justice said once that happens, the claim will be reviewed to determine the next steps.

The lawsuit said the province of Manitoba, “through its Department of Education, had the responsibility to supervise and inspect schools in Manitoba.”

The Archdiocese, the Order of nuns, and the province were expected to have policies and procedures concerning students’ safety and well-being, the claim said, and were to “take steps to prevent physical, sexual and emotional abuse of students…”

The suit also said the Order and Archdiocese were aware the priest would “be in intimate contact with vulnerable individuals, including children, particularly while in First Nations communities where the power imbalance between a member of the Order and the Archdiocese and the general populace was increased.”

The province’s Limitation of Actions Act was amended more than a decade ago to allow civil cases alleging sexual assault to proceed no matter how old the claim.